Lindsey Vonn opens up about her depression at millennial health forum

'A lot of the time I feel just incredibly insecure,' the Olympic gold medalist says 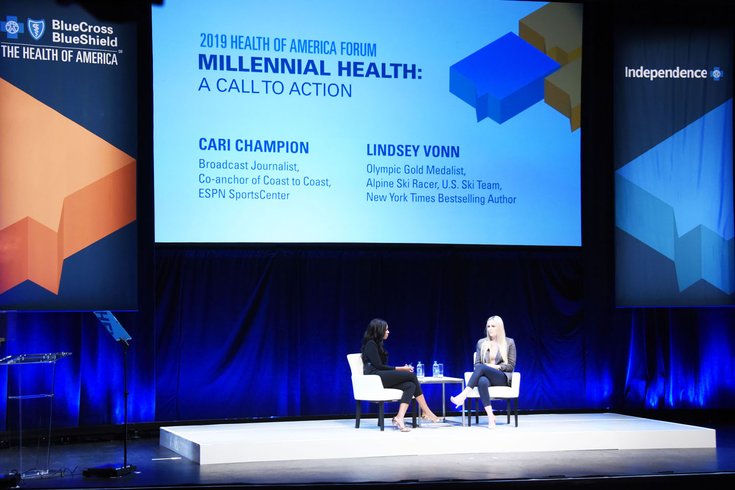 Olympic gold medalist Lindsey Vonn, right, shares her struggles with depression with moderator Cari Champion, of ESPN, at the 2019 Health of America Forum in Philadelphia.

Lindsey Vonn says she sometimes wakes up feeling "like a complete failure."

Yet, Vonn retired as one of the most decorated skiers in history. Her accomplishments – including a gold medal at the 2010 Olympics – are the type most Americans only can dream of achieving.

But the throes of depression can alter reality – and the mental health condition impacts all kinds of people.

"No matter what job you do, there's always pressure," Vonn said Wednesday at the 2019 Health of America Forum hosted by Independence Blue Cross. "There's always expectation. Not everyone handles everything the same."

In that way, Vonn, 35, is not unlike millions of fellow millennials who also suffer from depression. Much of Wednesday's forum – which focused entirely on millennial health issues – revolved around behavioral health challenges, including depression.

Since 2013, depression diagnoses have risen by 47% among millennials. Earlier this year, a Blue Cross Blue Shield report identified major depression as the most prevalent health condition affecting the generation.

Vonn first disclosed she battled depression seven years ago. At the time, she already was considered the most successful female American skier. But she had dealt with depression for years, including during her parents' marital struggles and her own divorce.

As a skier, Vonn said she was very good at analyzing her mistakes and moving forward without dwelling on them.

"But in my personal life, things didn't operate in the same way," Vonn said. "And I drew all of my personal confidence from my skiing."

Now that Vonn's career is behind her, she often experiences physical pain from previous injuries, which she said hampers her mental health. And Vonn said missed opportunities, including losing the 2011 World Cup by a mere three points, still plague her.

She also feels the sting of negative comments she sometimes receives on social media.

Vonn has found that her mental health is linked to her physical health. During her skiing career, she said injuries sometimes prevented her from feeling 100%, which in turn impacted her ability to push herself and perform to her capabilities. 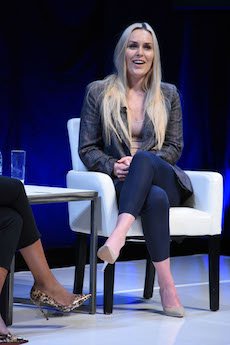 She still feels that correlation now, particularly when she wakes up with various aches and pains stemming from her athletic career. She joked about how a woman who was seven months pregnant outperformed her during a recent workout.

"If I'm not physically at least functioning in a relatively good way, I'm not confident in what I'm doing at all," Vonn said.

It's common for people who suffer from depression to also have other physical ailments. About 85 percent of people who have major depression also suffer from hypertension, type 2 diabetes or substance use disorder, according to a Blue Cross Blue Shield analysis.

Some health systems have worked to better integrate physical and mental health care – an approach that millennials value, according to BCBS's research.

"This generation is putting the onus on us as payers, as health systems, as providers, to deliver more meaningful solutions," Penn Medicine Chief Executive Officer Kevin Mahoney said. "That is what we're trying to do at Penn."

Erin Stucky, the chief executive officer of Blue Cross Blue Shield of Kansas City, said it's important to address the "true stressors" and other underlying causes of depression that millennials are encountering.

"It's amazing the number of millennials that truly are in a caregiver role," Stucky said. "It's either a child or a parent. ... We need to be able to support the millennials and (have) dialogue around that and really understanding the stresses that come with that kind of responsibility, on top of the expectations that they're being held accountable to in their work environments."

Yet, it is easy for people to compare themselves to others who seemingly have it all together, Vonn said.

Vonn said she sometimes looks at other athletes, like basketball star Kevin Love – another prominent athlete who has battled depression, and finds it difficult to fathom that they don't enjoy a perfect life.

But due to her own struggles, Vonn said she recognizes that belief as a misconception.

She said working with a mental health therapist has helped her cope with her depression. She encouraged others to seek professional help – even if, at first, they don't openly admit their struggles to their friends and family.

"Once you've been to therapy and you're making progress, then maybe you'll feel comfortable enough to open up to others and eventually ask for help," Vonn said. "But you have to make the choice for yourself and make a choice to change how you are.

"If you're unhappy, ... you have to see a professional. You have to. The only person that's really going to do that is you."