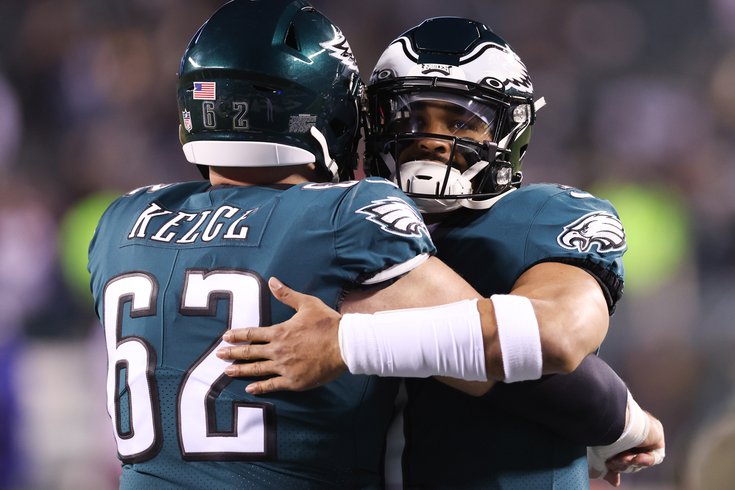 Eagles C Jason Kelce and QB Jalen Hurts embrace during warmups before their divisional round playoff game against the New York Giants at Lincoln Financial Field on January 21, 2023.

The Philadelphia Eagles got to sit back and relax with some stuffed crust pizza as the rest of the NFC playoff teams duked it out in the wild card round last weekend. Fresh off their first-round bye, the Birds will face their longtime rival, the New York Giants, who beat the Minnesota Vikings on the road last Sunday.

Jalen Hurts' sprained shoulder was clearly not 100 percent in the Eagles' Week 18 win over the Giants, but expectations are that he will be much further along in his recovery from the injury when he takes the field again on Saturday, as he wasn't even listed on the injury report all week. The Giants, meanwhile, have some notable players on injured reserve, but only one player was listed with a gameday injury designation. You can find the full Eagles-Giants injury report here.

The Eagles are 7.5-point favorites. Here are our staff writer picks as well as who some others around the country are picking.

Feel free to discuss the game — and the early Jaguars-Chiefs game in the comment section below.