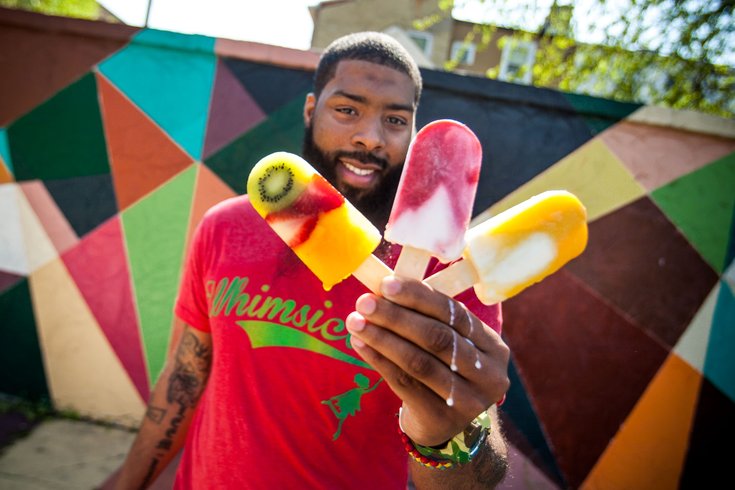 Ice cream truck tunes are already on constant loop throughout the city, signaling the start of summer. But factory-made confections full of corn syrup and who knows what else are not the only game in town. A handful of frozen treat companies have cropped up around Philadelphia in just the past few years. Everything from healthy ice pops to wacky ice cream scoops are hitting local festivals and grocery stores, meaning Philly's sweets scene is ready for a busy season.

But these foodie-entrepreneurs aren't just looking to make a profit. Each brand is far more than the sum of its delicious, refreshing parts. Take Whimsicle, the gourmet fruit pop brand created by husband and wife team Salim Weldon (above) and Tonae Simon.

Simon first began making fresh ice pops for her children as an alternative to sugar-filled store-bought versions. After receiving rave reviews, she and Weldon began making batches for friends' events. When photos of the pops leaked onto Instagram after a sell-out cookout, Whimsicle became an overnight success.

Now, at less than three years old, customized Whimsicles have appeared at celebrity events, Parisian weddings and Roc Nation parties. (You can also order them online.) 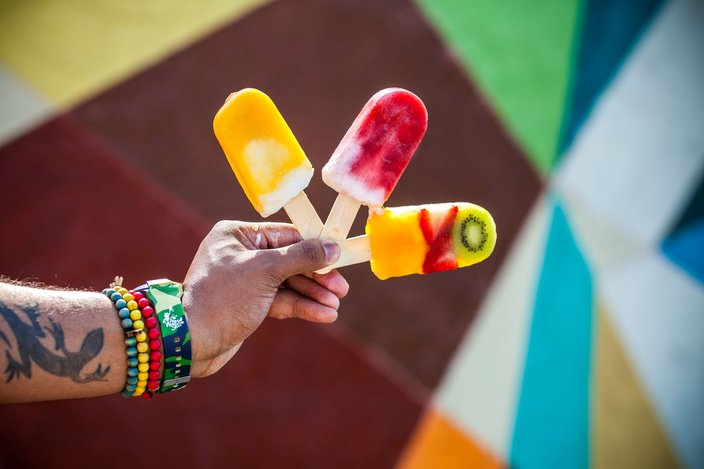 Each Whimsicle is made using natural juices and whole pieces of fruit you can actually see in the pop, with no added sugar. With Simon's background as a registered nurse and Weldon's background as a children's counselor, they knew how to make pops that would be both nutritionally healthy and fun to eat.

"Our main goal is to fight childhood obesity and diabetes through these popsicles," Weldon said. The team also hopes to inspire lifelong confidence in children through this physical health. "Therapeutically, if we raise self-esteem we lower suicide rates," Weldon said.

Weldon and Simon aren't only creating a healthy lifestyle brand (with fashionable pop-themed merch, to boot). They're also setting an example for modern entrepreneurs by using social media to spread major buzz and make connections with celebrity clientele. And it's all based on the old Friendly's restaurant policy of giving kids photos to take home when they ordered a sundae.

"If everyone who purchases a Whimsicle takes a picture with it and mentions our company [online], then on our page we’ll mention them to show that we’re appreciative of them," Weldon said. "It's a win-win for us." 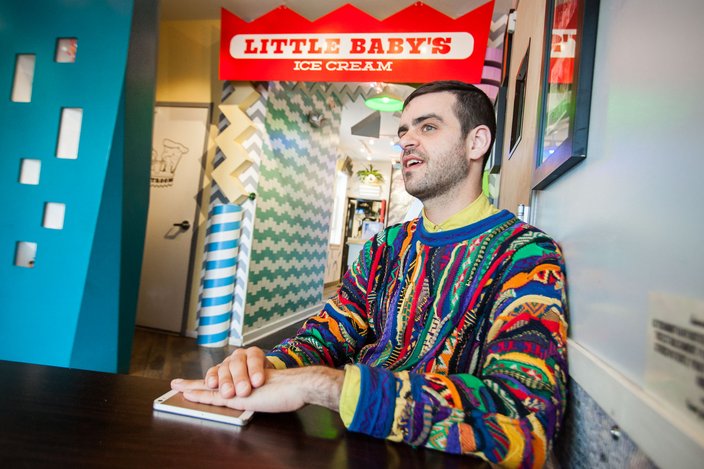 Little Baby's Ice Cream, the quirky brand based in Kensington, also knows a thing or two about social media. You may remember the incredibly divisive videos they released when launching their first storefront in 2012. According to co-founder Pete Angevine, the videos -- which featured ice cream-creature cannibalism and quickly went viral --- still get attention.

"Every single day we get prank phone calls from tweens across the nation," Angevine said. "An 11-year-old calls up and starts repeating the narration and then starts giggling."

But behind that creative marketing strategy is an equally creative product. Little Baby's is known for cooking up strange flavors that combine seemingly disparate ingredients into something totally delicious. Their Earl Grey Sriracha flavor, for instance, is a hot seller (pun intended).

It all started "on maybe a little bit more than a lark," according to Angevine, in 2011. He and co-founders Martin Brown and Jeffrey Ziga started selling their handmade product out of tricked out tricycles before opening two brick-and-mortars, the second of which is in Cedar Park. The tricycles now travel to parties, weddings and festivals like the upcoming Kensington Kinetic Sculpture Derby & Arts Fest, which Angevine describes as a homecoming of sorts.

Though Little Baby's is making more ice cream than ever before, it's still all handmade and on-brand - or, as Angevine likes to say, "Babysian." But the crew's real goal is to put a smile on someone's face.

"Most people love ice cream or have some kind of history with it or connection to it or nostalgia around it. So it presents a great opportunity to bring people together and maybe disrupt some expectations," Angevine said. 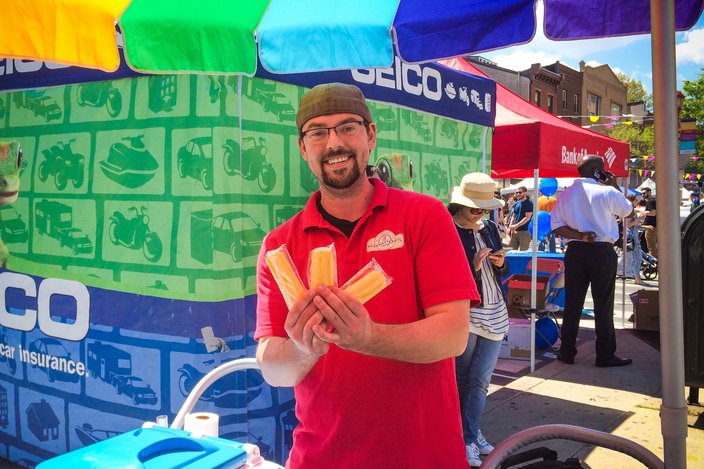 "That’s my favorite thing to do, being able to chat with customers and being able to see all the different smiling faces," Ostrander said.

And Mompops certainly gets to satisfy many different appetites. Born-and-raised vegetarian Ostrander and his mother create 100 percent vegan ice pops that are free of gluten, dairy, peanuts, soy and genetically modified organisms (GMOs). The pair noticed the vegan community didn't have many frozen dessert options, so they set out to create one themselves. Similarly, they're a boon to the gluten-free and nut-allergy communities.

"It’s nice to be able to provide a treat that everybody can enjoy," Ostrander said.

Though they just started selling pops five years ago, Mompops can already be found in the frozen aisles of local grocery stores, including five Whole Foods locations. Now, Ostrander said, they produce about 100,000 pops a year.

The 1-ounce mini pops you'll find in stores are great for guilt-free snacking; they use four or fewer ingredients, including fresh fruit puree. (Bigger 3-ounce pops are in Mompops' traveling carts.)

The handcrafted brand is still a mother-son operation, too -- though it is quickly expanding. They soon hope to make their mark on the West Coast by opening up production in Arizona. There they'll travel to festivals and spread the vegan pop gospel in warmer climates year-round. 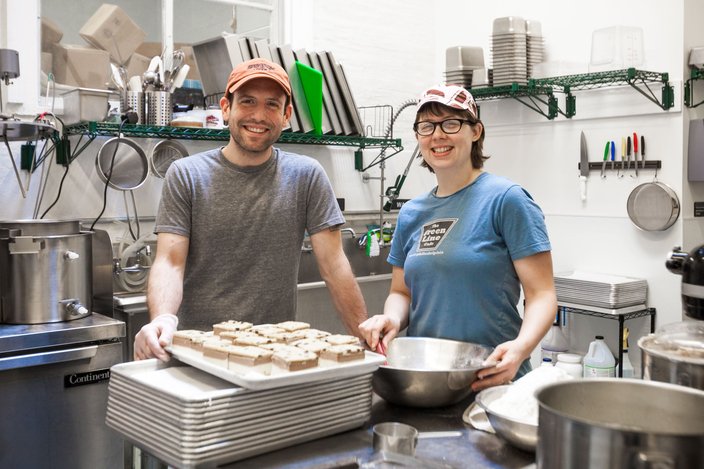 Weckerly's Ice Cream, on the other hand, is all about keeping things local. The micro-creamery, which began in the kitchen of Green Line Cafe before making its home in North Philadelphia, holds dear its values of creating unique flavors with fresh, local ingredients. You can find their products at local groceries and farmstands, traveling to fairs, or in their bi-weekly ice cream club.

Jennifer Satinsky (whose maiden name is Weckerly) owns the business with husband, Andy, and both are pure passion when it comes to the quality of their product. The cream the two use is grass-fed organic, the eggs come from local free-range farm Sandy Ridge and their milk comes from small local farms. The pair hopes to soon exclusively use milk from Birchrun Hills Farm in Chester Springs, making the operation's dairy 100 percent grass-fed.

"It also gives us the ability to work and grow with a friend, somebody that we really trust and admire," Andy said of the deal.

Using ingredients from responsible sources is the Weckerly way. Andy said, "We want any aspect of what we’re serving – any of the edible components of it – we want full accountability for it."

"Anything that goes into the ice cream we make from scratch," Jennifer said.

Unfortunately for some customers, that means no ice cream cones just yet. Cones are tedious to produce, and purchasing them from other purveyors just couldn't account for the creativity Jennifer likes to imbue into her recipes.

"Because I’m such a freak, I would want to pair the cone with each ice cream flavor. Like a pretzel cone with a chocolate!" she said smiling. 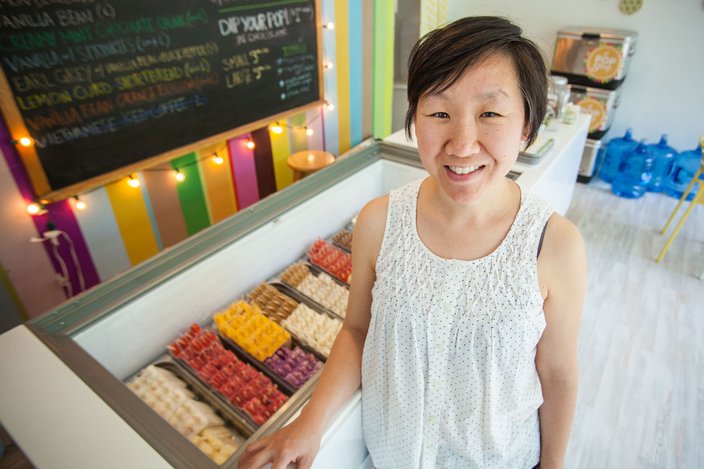 Each pop is made in house using local ingredients from the likes of Maplehofe Dairy, Seven Stars Farm, Rival Bros. Coffee and Kauffman's Farm. Though Lil Pop Shop has go-to perennial flavors, their many rotating flavors are very much inspired by the changing seasons.

"I get a lot of inspiration from just talking to other people and reading blogs and just hearing about what’s going on in the world and seeing what new flavors are available," Chang said.

During the winter season, the shop breaks out hot chocolate and homemade marshmallows. But when spring comes around, their food truck heads out to events every weekend until the next frost hits, which is Chang's favorite part.

"I really enjoy making people happy," Chang said. "I think that’s the best experience for me, when we’re going to an event or people come here and they’re like, 'Wow, look at all these flavors' and 'This is so good.' That for me is very rewarding and validating."

Chang's storefront is cleverly nestled right between Honest Tom's Taco Shop and Japanese restaurant Tampopo, a great destination -- complete with a seasonal parklet out front -- for both ice pop fans and dessert-seeking diners.

Though her venture into a second storefront on South Street didn't work out due to issues with the building, Chang is currently on the hunt for another place to set up shop. Some neighborhood is about to get very lucky.