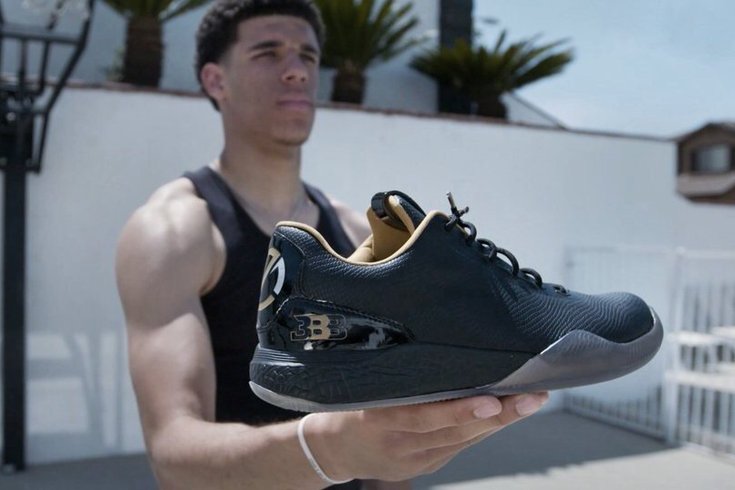 There is Lonzo's new signature shoe.

If Lonzo Ball is drafted by the Sixers this year (and until that doesn’t happen, we’re going to keep tabs on him), he’s going to wear his own shoes on the new Wells Fargo Center court. Not Nike. Not adidas. Not Under Armour.

I confess to not knowing a ton about sneakers —Air Max usually gets the job done for me — but these look decent enough for being manufactured by an independent company. I also appreciate that the Ball family is challenging a company like Nike that has a monopoly on basketball sneakers.

So, let’s take a look at the pricing for Lonzo’s shoes. I’m sure it’s pretty reasonab…

HOLY SCHNIKES! $220 FOR SLIDES! Alright, I know enough about sneakers that $495 is an absolutely absurd asking price, and yeah, Lonzo and LaVar got destroyed on Twitter:

This shoe costs $495. I wouldn't even pay that amount if it came with Lonzo Ball as an accessory. pic.twitter.com/MD2MtEkQz1

Get those ugly Lonzo Ball shoes for $495 or get 33 Large Ledo Pizzas. pic.twitter.com/DwaXbHAByx

That is a very small sampling, but it seems that in marketing his sons, LaVar Ball has come to the conclusion that there is no such thing as bad publicity. Heck, we’re giving it to him right now. Which brings us to this little ditty:

Big Baller's loose! If you can't afford the ZO2'S, you're NOT a BIG BALLER! 💰

A few months ago, I tackled the question if LaVar would scare me away from Lonzo. The answer is still no, but I do wonder if all of the extra attention will affect Lonzo once he goes to the NBA. Brandon Ingram stunk as a rookie, but nobody really cares because there is no such thing as Big Brandon Brand. That won’t be the case with Lonzo, who is a tricky but super talented prospect.

Oh, well. Until then, LaVar Ball is getting what he wants: everyone else talking about Lonzo and LaVar Ball.