What's with the LOVE Park redesign?

People are starting to talk 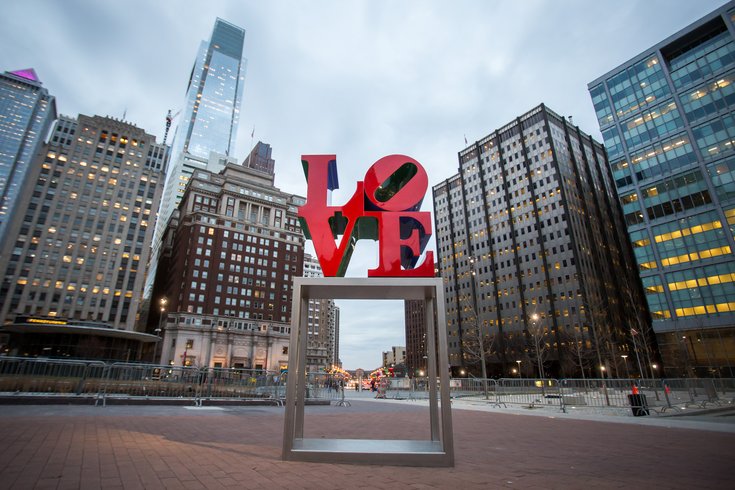 It’s a rainy, depressing Wednesday afternoon, so now feels like the perfect time to discuss what’s going on with the redesign of LOVE Park.

The official ribbon cutting ceremony won’t be until May 30 but the LOVE sculpture returned to its perch in February, the basin-less fountain has been (unsuccessfully) tested and the gripes have already started rolling in.

good morning to everyone besides the designers of new love park

It all began back in 2014 with promises of a fountain and basin that would double as seating, diagonal pathways and the same ‘ole LOVE sculpture, but on an updated pedestal. The parking garage underneath the park would also be getting a facelift. Public meetings were held and it went through the Art Commission back in November.

The Fairmount Park Conservancy announced a $250,000 gift from Bank of America to sponsor the plaza. And last Thursday officials held a small ceremony to dedicate a part of the park to the bank.

But last week, it started to be apparent to Philadelphians that this is actually what the park is going to look like — flat, with no seating, indistinguishable from the sidewalk it sits next to. 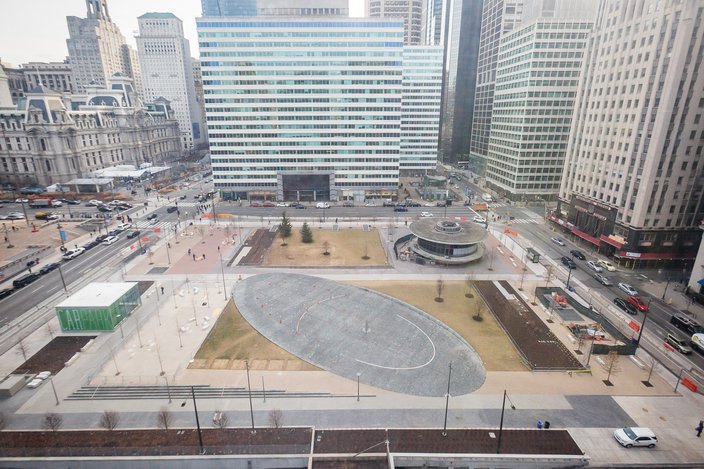 The Philadelphia Citizen called the park “one graceless plain” and “an enormous sidewalk.” Diana Lind went so far as to say she gets “a case of the Mondays walking through it.”

PlanPhilly talked to a park goer and transportation planner that called the new iteration a “hostile design.” And in response to that PlanPhilly piece Conrad Benner, the photographer and man behind the Streets Dept. art blog, called for anyone using Bank of America to close their accounts immediately.

In all seriousness, anyone who uses @BankofAmerica in Philly should quit and join another bank in protest of this absolute shit redesign of Love Park that they (partly) funded and renamed: https://t.co/lkf14E0M5y

Perhaps part of the city’s collective “ugh” about LOVE Park is that the design has an impersonal, ephemeral way about it. It feels like it’s discouraging passersby from lingering in the space. The park was known for its activity; the inevitable whistleblower with a microphone, lunchers and their brown bags, skateboarders with a boom box, someone sleeping on a bench, kids dipping their feet in the fountain.

But it wouldn’t be fair to write it off just yet, Philly. The park doesn’t officially open until the end of May, and by then there will be trees in bloom and greener grass. And not everyone is having a hard time with it.

The best way to talk about public distaste is to just show you what they’re saying. Here are some noteworthy reactions.

The new Love Park is insanely and depressingly shitty. It’s a horrible, uninspired design and I’m so frustrated that Philly has lost one of America’s most iconic parks and replaced it with a flat concrete slab that feels more like a closed parking lot than a park. 😡 https://t.co/OMt4Tseiyq

What's wrong with the new love park? Hostile design. Wide open hardscape unshielded from the sun, spaces designed to prevent people from sitting down. Sterile, horrendous, tragic. @JonasMcivitas and I visited and I have the UX a review: F pic.twitter.com/R0x4w4WHb4

The new LOVE Park fountain is on but I don’t like it at all. It drips across the ground all the way to 16th and Arch, and obvs not much for wading on hot days compared to the old one. pic.twitter.com/PkB8Cf9znr

In Soviet Love Park fountain is trash can. pic.twitter.com/yR572poKcw

I'd not been near City Hall much lately, so the new look of Love Park caught me off guard.

Who thought it was a good idea to turn terraced steps surrounding an iconic fountain into a flat paved oval with occasional benches!?

omg how did they do a redesign and end up with a barren empty plaza?!?