The woman seen in the rideshare driver's viral video is the owner of Fossil's Last Stand, Catasauqua police said 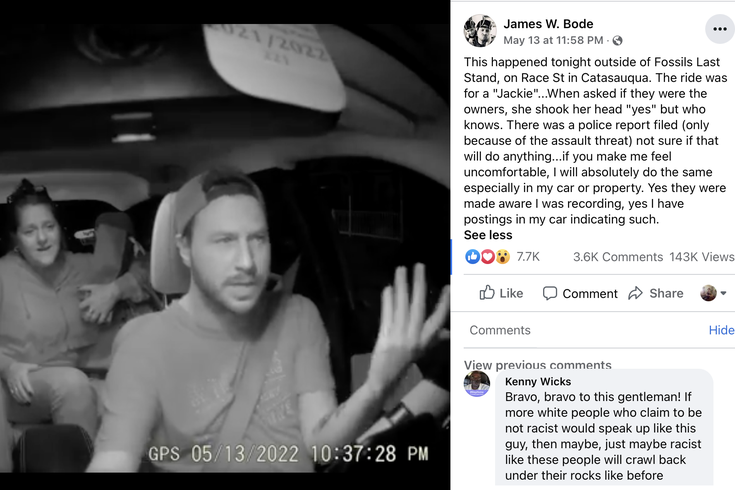 Lyft driver James W. Bode kicked a rider out of his car in Catasauqua, Pennsylvania on May 13 after the woman made racist comments when she got into the vehicle. The woman was later identified as Jackie Harford, owner of the local bar Fossil's Last Stand. She was accompanied by her boyfriend, who threatened violence against bode in a video the driver shared.

A Lyft driver in Lehigh County kicked the owner of a Catasauqua bar out of his car last Friday night after she expressed surprise and relief that he wasn't a person of a color. The driver captured a dash cam video of his exchange with the woman and her boyfriend, who threatened to assault the driver for taking a stand against racism.

James W. Bode, the Lyft driver, shared the video on Facebook Friday and said the incident happened outside Fossil's Last Stand, a biker bar along the 400 block of Race Street. Bode had accepted a ride on the app for a woman named Jackie, who told him she was the owner of the bar. (Note: The video contains explicit and offensive language).

Bode initially greeted the woman warmly as she got into his car, but the situation quickly turned.

"Excuse me?" Bode answered, shocked by the question.

"You're like, a normal guy — like, you speak English?" the woman said, then apologized and patted Bode on the shoulder.

"No, you can get out of the car," Bode said. "I'm going to cancel the ride. That's inappropriate. It's completely inappropriate. If somebody was not white sitting in this seat, what would be the difference?"

"Are you serious?" the woman asked.

At that point in the video, Bode began explaining to another man, just outside the car, what had happened and why he was canceling the ride. Bode informed the man and woman that the conversation was being captured on video.

Bode told the man and woman he would call the police to report the threat of violence before the video ended.

In the days since the video was shared, Bode's encounter has gone viral on multiple social media platforms, totaling hundreds of thousands of views. Bode received thousands of comments on his video praising him for his actions.

"For everyone reaching out and showing support, thank you. I appreciate it, truly," Bode wrote in a follow-up post on Sunday. "But this is the way it should be everywhere, every time. I shouldn’t be 'the guy' who did it or said it … we should all be that person. Speak up if you’re uncomfortable with it because it makes them uncomfortable, as they should be. F*** racism."

Police in Catasauqua confirmed to Lehigh Valley Live that the woman seen in the video is Jackie Harford, the owner of Fossil's Last Stand, and that an investigation into the incident is underway. The man in the video is Harford's boyfriend, who was not identified by police. Bode reportedly made a complaint around 10:30 p.m. last Friday.

Lyft responded to a tweet about the video on Sunday, saying the company was "grateful" for Bode "instantly shutting down this hate & upholding our no tolerance anti-discrimination policy. We're looking into these riders and are in touch with James to show our thanks."

These riders should be banned from Lyft. Your drivers should not be subjected to racist abuse. https://t.co/m5yeI4Lzom

The website and Facebook page for Fossil's Last Stand were no longer active on Monday, and Yelp users bombarded the bar's page with negative reviews in the aftermath of the incident on Friday.

Black Lives Matter Lehigh Valley shared a statement on Facebook about the incident on Sunday afternoon.

"This Lyft Driver is not a hero. He's just a normal guy fighting racism right here in the valley," the statement said. "You can do the same. Stand up for your neighbors. Thank you, James Bode."