The director appeared on the 'Late Show' to discuss his new movie, 'Glass' 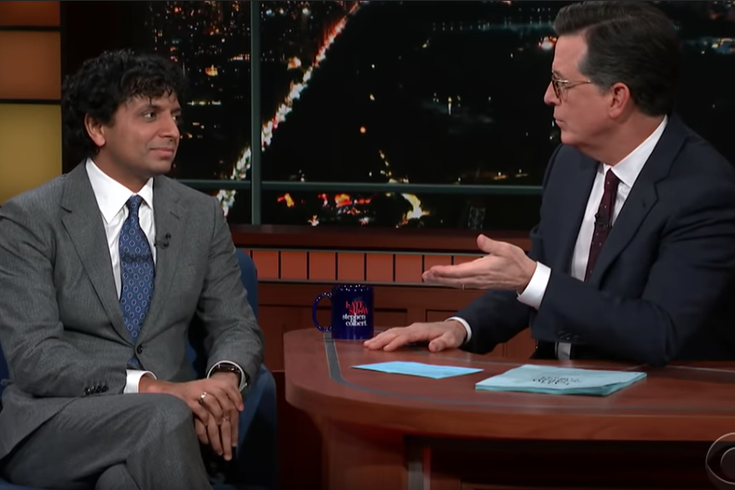 Colbert welcomed the director and right off the bat asked him how he happened upon James McAvoy for the role in "Split" and "Glass." Shyamalan discussed his belief about the “universe” and says, “I have a theory about the way things work. The more specific we think about things the more things come back to you.

“And so when you’re writing you’re hyper specific…You’re thinking about this specific person. Who could possibly play this part?”

But he adds what he describes as the right thing happening at the right time. He met McAvoy randomly at Comic Con, and it all just came together. “He’s the only human being out of 7 billion people that could have played this part.”

Colbert leads into his Philadelphia heritage, and when mentioning that he still lives in Philly, Shyamalan put his fist in the air and yells, “East Coast!”

He discuses being born in India and that his family wanted to come to the states to live the American dream. His father, especially, longed to come to the United States.  “‘I want to have the American Dream, and I want to go to Philadelphia where the Constitution and everything, where, you know, independence, Liberty Bell.' That was his thing. He wanted to go directly to the source of the dream.”

Colbert asks what his parents, both doctors, thought of him moving into a career in film. “It would have been the equivalent if I would have said I wanted to start goth rock band.” Colbert asks if they were disappointed to which Shyamalan pointedly says, “Yes.” He then tells the story of his disappointed father not even acknowledging him when he told him he was going to film school.

Colbert asks about his father's stance now, and he says, “Oh, now it’s totally different. My dad doesn’t buy a pack of gum without giving his credit card so they’ll see his last name now.”