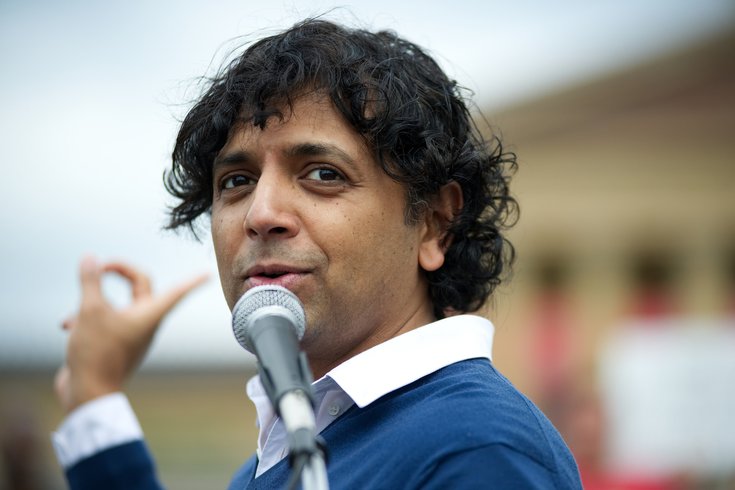 M. Night Shyamalan speaks at the 'Rocky Steps' as members of the local film community rally against potential cuts in the Pennsylvania film tax credit.

Philadelphia has a long and glorious tradition as a movie location. There’s "Rocky" and its six sequels. There’s "Philadelphia," "The Philadelphia Story" and "It’s Always Sunny in Philadelphia." And don't forget about "Silver Linings Playbook," "Trading Places," and the collected works of M. Night Shyamalan.

But more recently, the number of locally filmed projects have slowed to a trickle. Sure, Kevin Hart filmed "Untouchable" here in his hometown this past winter and his "Kevin Hart: What Now?" standup movie at Lincoln Financial Field in 2015. M. Night continues to do his work here. But "Always Sunny" only films in town for a few weeks a year – and some seasons, not at all. Fleets of production trucks aren’t nearly as much of a feature of Philly living as they were a decade or so ago. 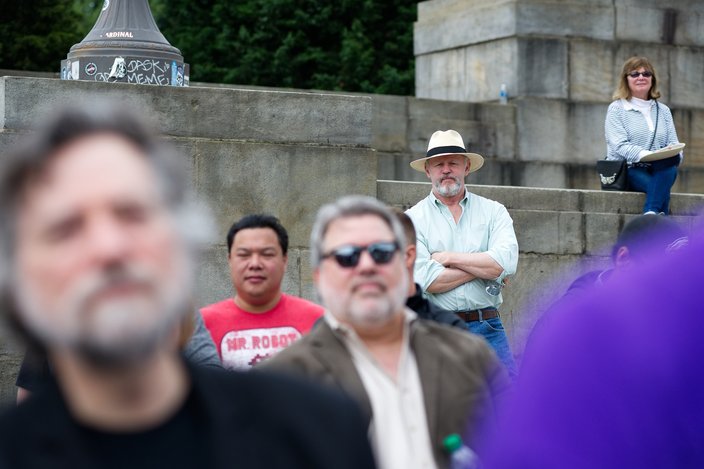 Actor David Morse was in attendance, Saturday, June 3, 2017, for a rally opposing potential cuts to the Pennsylvania film tax credit.

There’s a reason for that, according to the Greater Philadelphia Film Office (GPFO): The lack of certainty about the size and long-term availability of the Pennsylvania Film Tax Credit Program, which has caused numerous film productions to choose to film elsewhere. That’s why the GPFO held a Rally For Philly’s Film Industry this past weekend at Philly’s most famous film location of all – the “Rocky Steps” at the Philadelphia Museum of Art.

Among the more than 20 speakers at the 90-minute rally Saturday were M. Night himself, Philly-residing actor David Morse, other actors and several political and labor leaders, along with the GPFO’s longtime Executive Director, Sharon Pinkenson. The occasion was the turn of the calendar to June, the month when Harrisburg traditionally hammers out its annual budget. 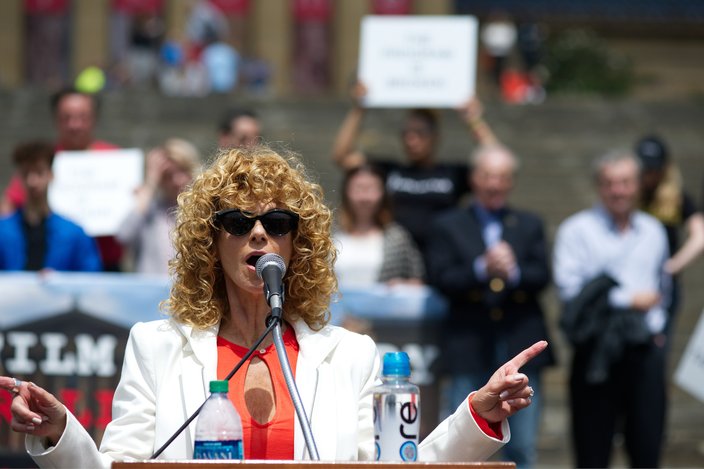 “The state budget is a mess,” Pinkenson said in her remarks.

“If they try to save money by cutting the film tax credit, they’re losing the taxes that all of us pay because we work in the film industry.” The goal is not only to save the existing tax credit, but to increase it, uncap it and lock it in for multiple years.

Several of the creative and union leaders were adamant about one point: They wish for themselves and their friends in the industry who come from the area to be able to work here in Philly, instead of having to spend large chunks of the year in New York or Georgia, or even moving to those places outright. 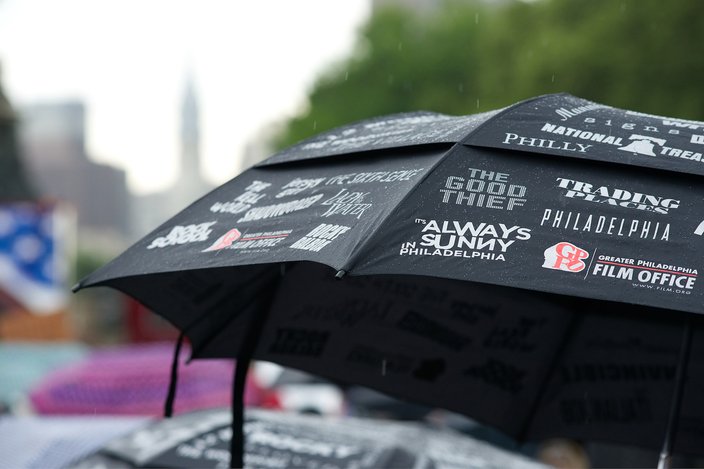 Umbrellas go up as it starts to rain during the film rally held on the steps of the Philadelphia Museum of Art, Saturday, June 3, 2017.

And while opponents of such credits tend to object to the notion of further enriching movie stars, film productions put money in the pockets of blue-collar crew members – hundreds of which are listed in the closing credits of most big-budget films. Unfortunately for the region, a lot of those same closing credits lately have featured the familiar peach logo that indicates the movie was filmed in Georgia.


Speaking at the rally, native son Shyamalan expressed pride that every film he has directed to date has been filmed at least partially in Philadelphia or the surrounding region, although some projects he either produced ("Devil") or worked on for television ("Wayward Pines") were produced elsewhere, in part because of uncertainty at the time about the tax credit.

“I’ve been making movies here in Philly, obviously, since I was a kid,” he said.

“My first film, I was 23…and the crews were taking care of me like fathers and uncles. And now, that person’s son works on my movies. And so, 20 years of making movies, they took care of me, and I want to take care of them.”

After a series of flops, Shyamalan is riding high again after January’s thriller "Split," his biggest hit in years; he’s also appeared at several Sixers games as a sort of celebrity superfan for the Joel Embiid era. Shyamalan’s next film is "Glass," which doubles as a sequel to both "Split" and 2000’s "Unbreakable."

PhillyVoice caught up with M. Night at the rally and he confirmed that he is currently writing "Glass," with an eye towards (he hopes) a fall start, to be shot, naturally, in Philadelphia. He added that his longtime passion project, the romantic drama "Labor of Love," is now on the back burner, and he’s concentrating on the film he’s writing now.

“I’m writing a new movie and just concentrating on this one,” he said. “I wish I could do more than one every two years.”

Morse, who has lived in the area since the mid-1990s, said from the podium that he supports the tax credit for Pennsylvania, having filmed multiple projects in both Philadelphia and Pittsburgh. 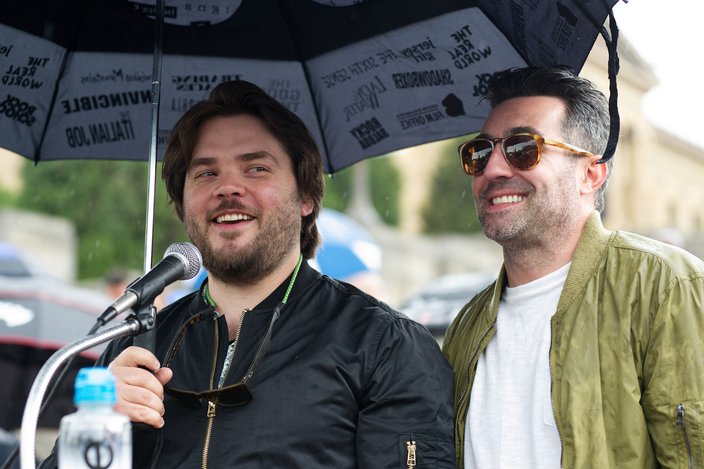 Actors, John McKeever, left and Tommy Pope, speak at a film rally opposing cuts to the Pennsylvania film tax credit, Saturday, June 3, 2017, on the steps of the Philadelphia Museum of Art.

Morse told PhillyVoice his favorite local project was "Hack," the 2002-2004 CBS drama in which he played a crime-solving cab driver in one of the longtime character actor’s few lead roles.


“'Hack' was my favorite, because we got to film in all the neighborhoods,” Morse said of the series, which filmed entirely on location. But that’s not his only Philly role – when Morse’s “apocalypse nut” character in 1995’s "12 Monkeys" released a virus that wiped out most of humanity, his evil quest began at Philadelphia International Airport.

Leading the charge in Harrisburg will be Sen. Vincent Hughes and Sen. Daylin Leach, along with Rep. Tim Briggs, all Democrats, and all of whom spoke at the rally.

Sen. Hughes gave a more animated address than even the actors present; his wife, actress Sheryl Lee Ralph, is currently starring in "Wicked" on Broadway.

“We’ve got the best city in the world,” Hughes said.

“The most beautiful, the most talented, the people who know exactly what to do when it comes time to creating life, and breathing artistic reality, and all the other people who need us to do that. Now we gotta make our colleagues in Harrisburg, including my friend, the governor, understand that this is important.”

Tommy Pope and John McKeever, the stars of the Comedy Central pilot "Delco Proper" appeared, as did Philly native and Penn grad Rebecca Creskoff, an actress whose credits include "Mad Men" and "Justified." 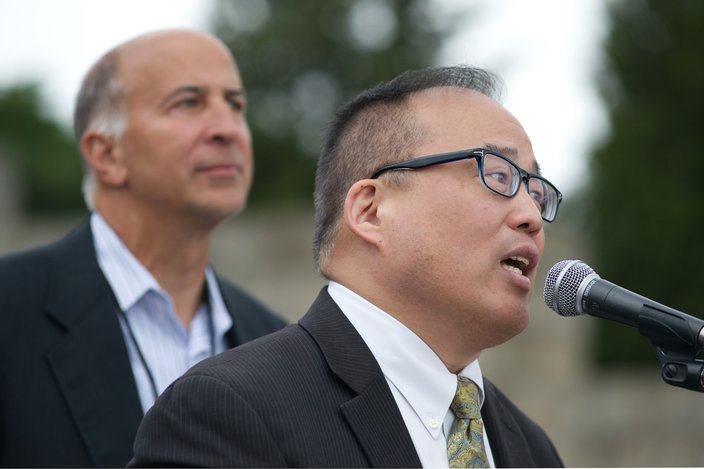 Councilmen Mark Squilla and David Oh share the stage at the bottom of the 'Rocky Steps,' Saturday, June 3, 2017.

The rally attracted a crowd of a couple hundred comprised of a healthy mix of creative types and union members, as well as several others from SAG-AFTRA. It took place against the backdrop of numerous joggers making their way up the Rocky Steps. A welcome face at the event was Philadelphia Councilman David Oh, who arrived for his scheduled appearance even though he had been stabbed outside his home just four days earlier by an unknown assailant.


So who’s against the tax credit? Sources say politicians in Harrisburg who either seek to cut spending in general or who come from more rural areas and are opposed to benefits that tend to accrue to bigger cities.

“We hear that there are people in Harrisburg who don’t support the tax credits, who feel like we’re being taking advantage of by Hollywood,” Morse said at the rally.

“Well, I think we should take advantage of Hollywood. When we watch the credits at the end of a film, all those people that go by, those are all jobs.”