Mailbag: Should the Eagles have interest in Cardinals QB Kyler Murray? 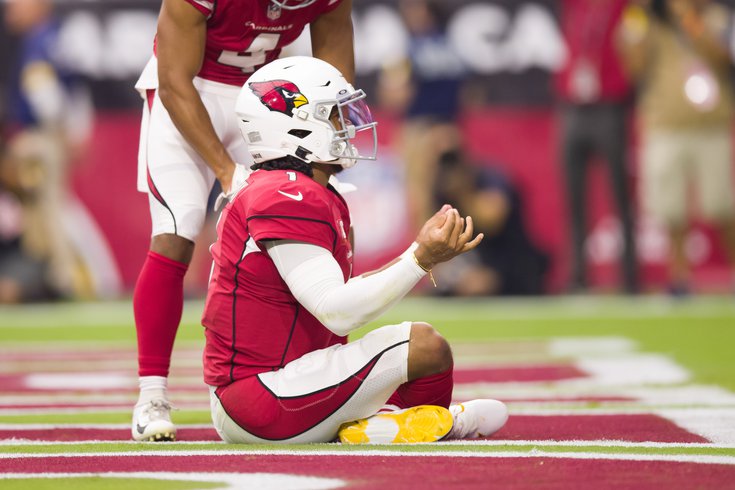 Kyler Murray's actions this offseason have not been very zen.

We didn't have a chat this week, but I solicited questions and comments from Twitter and via email so that we could still have our weekly mailbag. Let's just get right to it.

Question from Dave: Would GM Jimmy trade 15 and 18 this year as well as the first-round pick from the Saints next year for Kyler Murray?

First, for those of you who are unaware, Murray's agent reportedly submitted a contract extension proposal to the Cardinals, did not immediately receive a counter offer from them, and then pulled the offer off the table. A video recap from Tom Pelissero of NFL Network:

From @NFLTotalAccess on where things stand with the #Cardinals, Kyler Murray and other teams interested in the two-time Pro Bowl QB. @nflnetwork pic.twitter.com/hquNwrOmiP

It seems Murray has taken notice, and he wants to join the $40 million per year club... right now. According to Pelissero, he is willing to exercise the only real leverage he has if he doesn't get what he wants, which is to hold out.

Unfortunately, Murray's situation is not like any of those aforementioned quarterbacks' situations. Murray just completed his third season in the NFL, and while he is now eligible for a new contract extension, he is under contract for his fourth year, and if the Cardinals exercise their fifth-year option on him, his fifth (duh). They would also then have the franchise tag at their disposal in year six.

It would be out of the ordinary for a quarterback on his rookie contract to get a new deal as early as March or April of the offseason in between a quarterback's third and fourth seasons. A look at four recent comparable situations:

All four of those quarterbacks are better than Murray, and the soonest that any of them got a new deal was Mahomes, who signed in July of the offseason after his third season. Hell, Lamar Jackson still hasn't gotten a deal done yet, and he's heading into his fifth season. If you want to go back another year, you have Jared Goff and Carson Wentz, who both received contract extensions after their third seasons in the NFL, and their teams eventually regretted it.

This squabble between Murray and the Cardinals isn't new. In February, Murray scrubbed his Instagram account of all photos related to the Cardinals. Shortly thereafter, a report surfaced from Chris Mortensen of ESPN in which Murray was "described as self-centered, immature and a finger pointer."

The odd vibe between the @AZCardinals and Kyler Murray is indeed alarming:
Murray is described as self-centered, immature and finger pointer, per sources.
Murray is frustrated with franchise and was embarrassed by playoff loss to Rams and thinks he’s been framed as the scapegoat

And then soon after that, Murray's agent put out a long, rambling, all caps statement in which he basically said that the Cardinals sucked before Murray got there, and that Murray is responsible for any success the team has had since his arrival. It also hints at some sort of ultimatum. Don't actually attempt to read this unless you want a headache.

Is Murray talented? Sure. He's got a big arm and he can run. He also has a Rookie of the Year trophy on his mantle (even if it should have gone to Josh Jacobs or A.J. Brown) and a couple a Pro Bowl nods. He's clearly a better quarterback than Jalen Hurts. On the downside, he has contributed to late-season Cardinals collapses in each of the last two seasons.

So to answer your question, am I trading three 1s (it might even take more than that) and paying this guy over $40 million per year, thus marrying myself to him for the foreseeable future?

The Eagles should look for upgrade opportunities on Hurts, but they also have to be careful to do so with the right player, not just any upgrade. Murray's talent isn't so appealing that I can just hand-waive away the maturity concerns, so you can count me out on that one.

My belief is that Murray and the Cardinals will eventually get an extension done.

Question from TJ Hester: With a lot of the WR turmoil this off-season leaving holes at that position with playoff teams, how many top WRs do you see going before the Eagles pick?

This time last year, one of the big questions was whether or not one of the big three wide receiver prospects (Ja'Marr Chase, Jaylen Waddle, DeVonta Smith) would make it to 12, where the Eagles were scheduled to pick.

This year, the consensus is that there are five receivers at the top of this draft, in whatever order you prefer. They are Ohio State's Garrett Wilson and Chris Olave, Alabama's Jameson Williams, Arkansas' Treylon Burks and USC's Drake London.

If the Eagles really want a receiver this year, they won't have to sweat it. My guess is that three of those guys should still be available at pick No. 15. At a minimum, there should at least be two.

That said, if we're looking at teams in front of them who need help at wide receiver, I would go with:

But again, if it's a receiver the Eagles want, a good one will be there. And if all five receivers get taken, then some other really good player at a different position of need will be there instead.

Question from Big Winz: Who will be the biggest first-round WR bust this year? My front runners are Drake London and Treylon Burks.

I'm with you on London. He is way too reliant on contested catches. His highlight reel reminds me a lot of J.J. Arcega-Whiteside's coming out of college. In the NFL you have to be able to separate, and there are major concerns there with London.

And you know what confuses me about London? He's thought of as some sort of monster in terms of size. He's 1/8" shy of being 6'4 (he's 6'3 7/8"). Certainly that's well above average, but it's not like he's Harold Carmichael or something. Mike Evans, a player that he's commonly comped to, is a full inch taller with arms that are more than two inches longer. And oh by the way, London did not participate in any athletic testing drills this offseason, which is a red flag, even if he may not have had as much time to prepare for them as other prospects after recovering from an ankle injury.

I'm not with you on Burks. That dude is a YAC monster who was dominant in the best conference in college football when opposing defenses knew the ball was going to him. Give me Treylon Burks all day.

Question from MechaGodzilla Jouissance Coomer: This DT class is weak after the top two rounds. Assuming they don’t spend a first on a DT, how imperative is it to trade up in R2 for Perrion Winfrey or Travis Jones?

If the value is right for a defensive tackle in this draft, then the Eagles should go ahead and take him, whether that's in Round 1, Round 2, Round 3, or thereafter. However, while Fletcher Cox and Javon Hargrave are both scheduled to become free agents next offseason, that's not a position I would force in this draft. They're at least set for 2022.

Question from Greg Richards: Former Carolina GM Marty Hurney was a sportswriter before becoming an executive. What current Philly sportswriter would be the most successful if they made the same transition?

So this almost happened already with a Philly sportswriter, and it still may eventually happen in time. Eric Tulsky is the Assistant General Manager for the Carolina Hurricanes, and he interviewed for the Chicago Blackhawks' GM job a few months ago. He formerly contributed to Broad Street Hockey, the SB Nation site for the Flyers.

As for who would make the best GM among the current Philly sportswriters, does Sheil Kapadia count? I think his big picture sensibilities are typically spot on, and he wouldn't make any big mistakes, while also allowing the scouts, money people, and analytics nerds do their jobs.

Question from Child Scott: Who was your favorite character in the Goonies?

Chunk. In my late teens, some of my friends and I for a short period called "shotgun truffle shuffle" instead of just regular old "shotgun" in order to sit in the front seat. You would then also have to do the truffle shuffle.

What I don't understand about that clip is why Chunk couldn't have just reached over and unlocked the gate himself. And then also, who then reset the bowling ball, balloon, football, etc. for the next person who showed up at the gate?

Question from Conán: Can you go surfing so the Eagles make a move? Please and thanks.

In April? God no, not in New Jersey. Also, that's not what produces Eagles moves. It's when Les Bowen goes on long walks.

Question from Tyler: Do you think any of the people in charge of the press box food spreads are aware of your reviews?

I know that some are. When we went to Buffalo in 2019, the head PR guy there (Derek Boyko, formerly of the Eagles) gave me a tour of the press box food spread upon my entry.

But one of my proudest moments was earlier in that season, after I tore the Jacksonville Jaguars a new one for a spread that even Dan Snyder would be embarrassed to serve.

Shortly thereafter, I got a text from someone I knew elsewhere in the NFL who said, "Long story on how I know this, but Jaguars PR had a long meeting with their press box catering company yesterday after they saw your article. And they say your shouldn't be writing this? Lol. Future media visiting there will be thanking you!!!"