Mailbag: So I guess I'll chime in on 'Antonio Brown to the Eagles?' 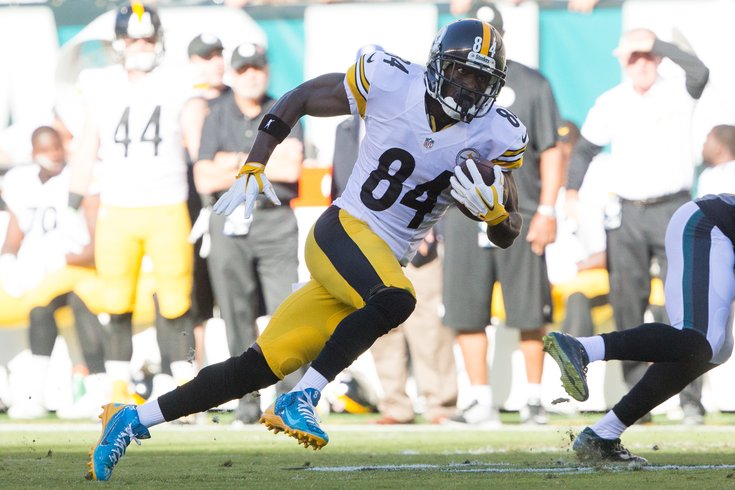 In our Eagles chat this week, there were a lot of questions that we could not get to in time or other questions we did answer but could use more color. And so, let's do a mailbag post to answer some of the overflow.

Question from Dan: Antonio Brown. Yes or no?

Let's look at it from a pros and cons perspective.

• Money. He wouldn't be that expensive, really, as is. If Pittsburgh traded him, they would take on cap charges ($21,120,000 in total) associated with his prorated signing bonuses, and his new team would only be responsible for his salary. Brown's cap hits on his new team would be as follows:

For Brown's production, those are bargain prices. However, he seemingly wants a new contract, with "no unguarantees," via Instagram Live, transcribed by NinersNation.com:

“If your squad out there want to win and your squad want a hungry wide receiver who’s the best in the whole world, someone hit my phone. Tell them I ain’t doing no unguarantees. I ain’t even gonna play myself no more for this NFL, you heard? I think I done everything. What y’all think? What left for me to do? Win a Super Bowl? Gotta be the right team for that, right?”

“If your team got guaranteed money, tell them call me. AB can’t do no more unguarantees.”

“If your team got guaranteed money, they want to get to know me and work with me, tell ‘em call me ... I ain’t got time to waste. I got five kids, you heard?”

So, you know, there's that, and the Eagles probably can't afford whatever it is he wants.

• Draft picks. What's the compensation? It won't be cheap, and the Eagles need all the cheap players (draft picks) they can get with Carson Wentz's contract extension on the horizon.

• If Alsh... some unnamed player already thinks there's "too much Ertz," how is that player going to feel when an alpha like Brown, who dominates targets, is inserted into the offense?

This is an easy "pass" for me.

Comment from Jason: The free agent market is typically replete with running backs, and bereft of outside wide receivers. In addition to positional value, it makes more sense to target wide receivers early in the draft than running back. Acquiring a quality running back from multiple channels is much more affordable than speed wide receivers.

I agree. Many think the top wide receiver on the market this year is Golden Tate, and it’s hard to argue with them. That’s how bad this class is. I will say, however, that there were a lot of wide receivers in free agency a season ago, and most of them – even the second- and third-tier guys – got paid:

I believe that the league overvalues outside wide receivers to some degree, but unfortunately, you still need them, so the cost just is what it is. That’s why you see receivers being taken way earlier than they are projected in the draft.

Of course, if you overdraft receivers, logically, there's going to be a higher bust rate. The 2014 class produced a bunch of star receivers, but from 2015 to 2017, there was a whole lot of crap:

First round receivers rebounded a bit last year with Moore and Ridley, but I would still say that 10 of the above 15 players have been disappointments so far in their short NFL tenures.

So it's a balance. Yes, you need outside receivers, and you're going to have to use valuable resources to get them, whether that be with a high pick in the draft or for a lot of money in free agency, but you also have to really feel comfortable that you're not getting a lemon, which happens quite often at that position.

Question from Lauren Kennedy: Last year, the Eagles surprised everyone by re-signing Nigel Bradham. Who is a candidate to be a surprise re-signing this year?

I would say that Brandon Graham could fit that bill. And on a lower level, bringing Mike Wallace back might make sense. He signed an extremely cheap contract a year ago, and he'll probably make even less this year. Wallace never really got to show what he can do.

Question from Seymour Hiney: Do you think they will add instant replay to the pass interference call? Also, are you a fan of the AAF “no kickoff” rules? Maybe you can mailbag a reply of “rules you want to see.”

To begin, no, I don’t think adding replay for pass interference will happen anytime soon, though it should. Personally, while pass interference is on everyone’s minds because of the Rams-Saints game, I think roughing the passer calls (and no-calls) are in more dire need of being reviewed. Those seem to be the most horribly officiated calls in the NFL. Secondly, I do not like the new kickoff rules. I’m a big fan of special teams, and I don’t really want to see the kickoff go away, even if it’s such a small part of the game these days, as is.

As for “rules I want to see,” I don’t know that I have many. There are two rules I’d like to see enforced more are intentional grounding, and delay of game. Delay of game is especially infuriating when everyone at home can see that the play clock has hit zero, the ball has not yet been snapped, and the officials let them run the play anyway.

Somehow, the viewing public just generally accepts the explanation that the back judge has to see the play clock hit zero, at which point he has to refocus his attention to the line of scrimmage, and if the ball hasn’t been snapped, he then throws the flag. We are led to believe that it takes the back judge a full half-second for his pupils to refocus on the line of scrimmage, and the offense is given that half-second grace period.

Can we get a “delay of game” buzzer or something that goes off when the play clock hits zero, with the offense continuing to play unless they hear a whistle? That way, the poor back judge doesn’t have to make his eyes undertake the long journey of moving from the play clock to the line of scrimmage, and he can instead use his hearing and vision senses in tandem. Or does that just make too much sense?

Question from Dalessandros: Are you paddling out tomorrow, and what’s your board of choice for these winter swells?

God no. I don’t like surfing that much to go out in NJ in February. I’m too much of a wuss for that. I didn’t know there were waves today, but you’re right. Looks like some nice 4-5 footers in LBI. I have two boards. One is a 9’6 Walden, and the other is a 6’5 WRV that I’ve had forever.

I almost never use the shortboard. I’m your classic old guy with the longboard in the lineup. It’s just easy.

Question from Maggie Moron: Jimmy, did you see that Trump stole your 69 joke? He said 69 percent something, something, blah blah, and then ended it with, “Nice!”

Well, first, to be clear, that’s not my joke. That’s everyone’s joke. Except Trump’s. And now that he has used it, it’s no longer funny.