Many who live in the New Jersey township of Piscataway know Malcolm Jenkins as a role model. To outsiders, he is known by many as an NFL player who last season raised a fist during the national anthem.

While free agent quarterback Colin Kaepernick appears to have been blackballed from the league for refusing to stand for the anthem last season, Jenkins has survived the unwritten rules of behavior.

Critics might call Jenkins a problem, or disrespectful, or that he’s taken too many hits to the helmet. Others might call him a contradiction. Friends would say he is misunderstood.

If you think you have this guy pegged, the Philadelphia Eagle with the degree in Communications from The Ohio State University, the guy who for seven years has run the non-profit Malcolm Jenkins Foundation, the guy who has gone on “ride-alongs’’ in police cars, the guy with the thick black beard, the 29-year-old with all the tattoos, you might consider dumping the stereotype.

“I actually enjoy that,’’ Jenkins said late last month while running his sixth annual Next Level Youth Football Camp at Piscataway High School. “You can try and paint me into a box, but the minute I talk to you it’s hard to deny my stance, my way of thinking. And that’s what everybody has to look forward to, that opportunity, to at least show who they are before you’re pre-judged.

“When people pre-judge me, and then talk to me and leave the conversation feeling different, it shows them a little bit of their flaws. And sometimes I have to have that same realization. I have to tell myself, ‘Hear him out first,’ because you can’t pre-judge somebody just because they don’t agree with you. I think that’s a healthy way to move forward and address things.’’

Close to 500 kids (ages 7-17) participated in his football camp, for free. A handful of current and former NFL players who also donated their time.

Seven years ago, Jenkins formed the foundation, a non-profit that its website notes as being, “committed to youth development in underserved communities through programs and initiatives that emphasize education, character development, leadership, life skills, health and recreation.’’

Directed by his mother Gwen, it has raised more than $100,000 in scholarships. He also started up a Cease Fire Campaign to reduce gun violence when he played for the New Orleans Saints and helped support families affected by Hurricane Katrina.

But more people know of Jenkins’ protest than, for instance, his 2017 honor from the NFL Players Association. He was presented the Byron “Whizzer’ White Award, given annually to a player going above and beyond performing community service.

“I remember Kaepernick didn’t send a message or say anything before he sat during the anthem (thereafter he knelt). Because of that,’’ Jenkins said, “everybody wrote his narrative for him. But a raised fist has been done before, and everybody knows what it’s for and it’s easily identified with a cause and something that couldn’t be misunderstood.

The display was reminiscent of the 1968 Olympics when American sprinters Tommie Smith and John Carlos raised their fists on the medal stand. Assumed by most as a statement for Black Power, the athletes said it was a gesture for human rights.

Kaepernick, who last year said his message was targeted at the oppression of non-white races in America, was attacked more by those interpreting his stance as simply anti-white. Last season with the 49ers he played in 12 games, threw for 16 touchdowns and more than 2,000 yards.

“It’s unfortunate, and in my mind wrong,’’ Jenkins said about Kaepernick’s apparent blackball. “But it’s one of the things where you step out there you kind of understand. He’s definitely an NFL quarterback. I’m not gonna’ say he’s a great NFL quarterback, but there are much worse that have jobs.

“The good thing is,’’ he added, “there are other players who still have the same stance and will still communicate the same message.’’ 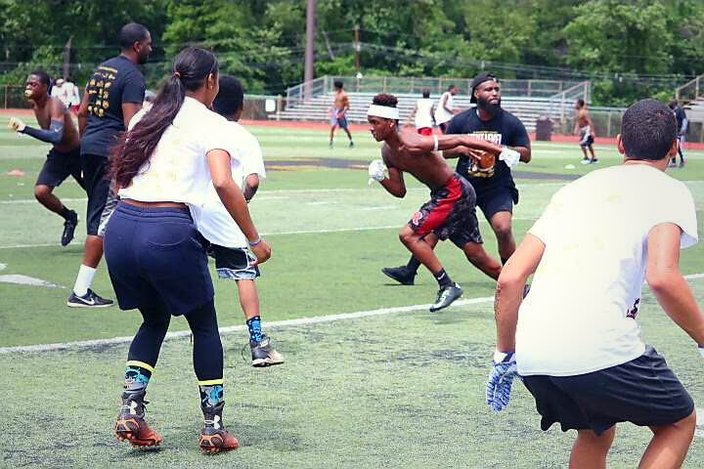 Jenkins’ stance caused an immediate response from his father, Lee.


“That was probably the only time I’ve texted him in about the last three-four years,’’ he said. “I told him, ‘I’ve never been more proud of you, to just stand up and use your voice.’ All he said was this is wrong, and we can do better as a society. And I don’t see anything wrong with that. As matter of fact, I see that as an obligation, and I like the fact that he’s not shying away from it.

“I’m sure there are some who think he should play ball and just be quiet, but he can’t speak up sometimes and not others.’’

As Polonius was quoted more than 400 years ago, to thine own self be true.

“When you go out on a limb like that you look for reassurance from people you trust and kind of lead you. That was one of the few times I got a text from him,’’ Jenkins said of his father, “so that stood out to me as one of those things that also let me know I’m doing the right thing.’’

Other family members were just as proud, including his two younger brothers.

“The thing is,’’ said the father, an engineer with Comcast, “(Malcolm’s) not saying he’s anti-police. None of us are anti-police. We have police in our family and a ton of people in the military. My father, Malcolm’s grandfather, served in Korea. His great-grandfather fought in World War II, and both have Purple Hearts. And we have cousins, nephews, nieces and uncles who were all in the military.’’

Heck, even his high school coach, Dan Higgins, is a police officer.

“He’s one of the most talented, unselfish players I’ve ever had,’’ the veteran coach said. “The leadership qualities were always there, the high-level character. He always had the intangibles.’’

They led to being awarded the 2008 Jim Thorpe Award as a senior at OSU, presented to the nation’s top defensive back, being part of a Super Bowl championship with New Orleans, making a Pro Bowl, becoming a philanthropist, and now, well, a spokesman.

“I don’t think we’ve ever truly, as a country, addressed the importance and significant impact race has had on our country,’’ Jenkins said. “And so as much as we try and move past it, any time there’s an accomplishment, especially from the black community, we say, ‘Cool, everything’s good,’ and we brush past it. But it’s really still alive.

“So, until we deal with that there’s no way in my mind to really move forward on that. It starts in the minds and hearts of citizens of America, but also systems that can be broken down to help that process. That’s where we are right now, at more of an educational phase and self-reflective phase, where we’re trying to get people to at least acknowledge there are problems, and that things are prohibiting us from moving forward.’’