Malcolm X [El-Hajj El Malik Shabazz] was born 90 years ago on this date. One of the most prominent leaders of the Civil Rights era, he traveled around the country and the world spreading his message --of black separatism and later human rights -- before his assassination in 1965.

During his activism, however, he spent a small amount of time in Philadelphia, and there are a few reminders regarding Malcolm's impact on the community across the city. Here's three interesting facts about his time spent here and his lasting legacy in the city.

He lived in North Philly

While working to expand a Nation of Islam Temple here in Philly, Malcolm X lived in an apartment at 1522 North 26th Street in 1954. The FBI was tracking his movements at the time, according to Hidden City Philadelphia. While he was only here for three months before reassignment, he did return to the temple several times and made his last appearance here during a rally in 1963. Hidden City has more on his legacy:

Malcolm’s stay in Philadelphia was short and lacked drama, which is probably a good part of why it remains little known here. Yet Malcolm’s lingering reputation as a racist has something to do with it, too. The general public tends to take pride in less politically divisive figures ...

There's a park named after him

Located between 51st and 52nd streets and Pine St. and Lakewood Avenue in West Philly, Hidden City says it was renamed to Malcolm X Park in 1995, formerly known as Black Oak Park. Today, a group called the Malcolm X Park Neighbors helps host events and maintain the park. They hold monthly meetings and keep track of the goings ons, such as live jazz music and arts festivals, and even work on getting community feedback for future projects, such as a dog park.

There's a mural of him, too

Completed in 2005 by artist Ernel Martinez, "Malcolm X" can be seen at the corner of Ridge Ave and W. Susquehanna Avenue in North Philly. A quote on the mural reads, "Education is our passport to the future, for tomorrow belongs to the people who prepare for today." 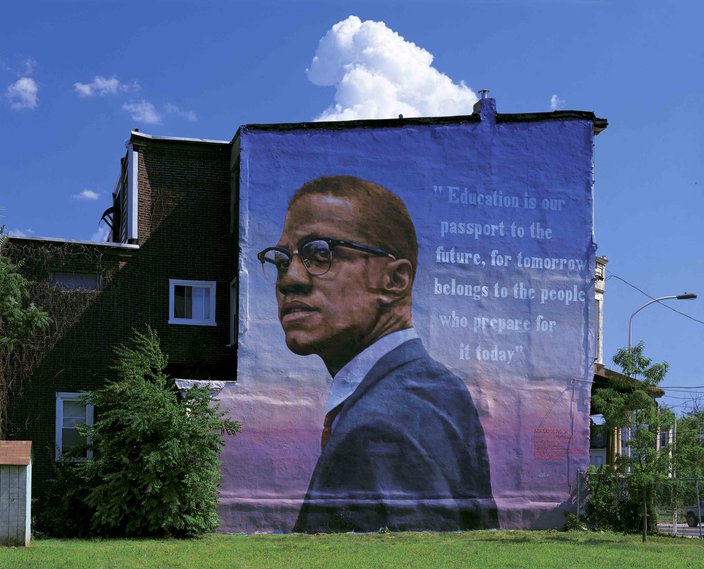