But medical experts say shoregoers have little to fear 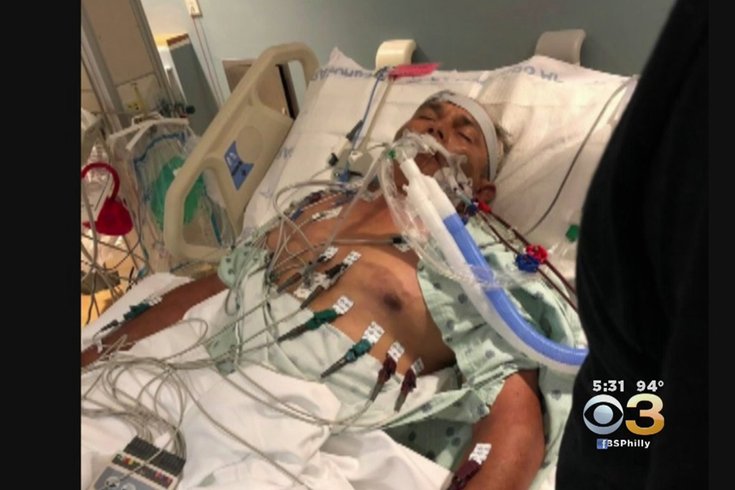 Angel Perez lies in a hospital bed after contracting a flesh-eating bacteria earlier this month while crabbing in waters near the Jersey Shore.

A New Jersey man has reportedly contracted a flesh-eating bacteria while crabbing near the Jersey Shore earlier this month.

Angel Perez, 60, will need to have his fingers and some toes amputated to prevent the spread of an infection caused by Vibrio bacteria, according to the New York Post.

He remains in critical condition at Cooper University Hospital in Camden, the hospital said Friday.

Vibrio – a bacteria that naturally lives in some coastal waters – can cause a skin infection when an open wound is exposed to salt water or brackish – a mixture of fresh and sea water.

Perez reportedly was crabbing at Matts Landing in Maurice River Township, where freshwater dumps into the Delaware Bay.

But the general public has little reason to worry, according to medical experts.

Vibrio infections mostly occur in patients with underlying liver diseases, like cirrhosis, or with weakened immune systems, Zurlo said. And most Vibrio infections are contracted by eating raw shellfish – not through an open wound.

So don't cancel any trips to the Jersey Shore, Zurlo said.

"They're a pretty tough thing to give a blanket statement," Zurlo said. "If you knew you had advanced liver disease, certainly I would not eat raw shellfish."

A Virginia man died earlier this month after contracting the disease in the state's eastern region, according to The Washington Post. The death was the first among 23 Vibrio cases in Virginia.

"If you start to get a skin infection, don't sit on it," said Dr. Ebbing Lautenbach, an epidemiology professor at Penn's Perelman School of Medicine. "Go see a physician quickly. If you have the infection, you want to identify it quickly and start therapy quickly."

Vibrio infections cause some 80,000 cases each year in the United States, according to the Centers for Disease Control and Prevention. Of those, about 52,000 come from contaminated food.

Many shellfish – particularly oysters – are found in coastal regions with brackish water, Lautenbach said. And it's impossible to clean shellfish without cooking them.

"The Chesapeake Bay is sort of the classic area," Lautenbach said. "The bacteria counts for Vibrio are pretty high. It gets higher in the summer."

About 80 percent of Vibrio infections occur between May and October, when water temperatures lead to higher concentrations of the bacteria.