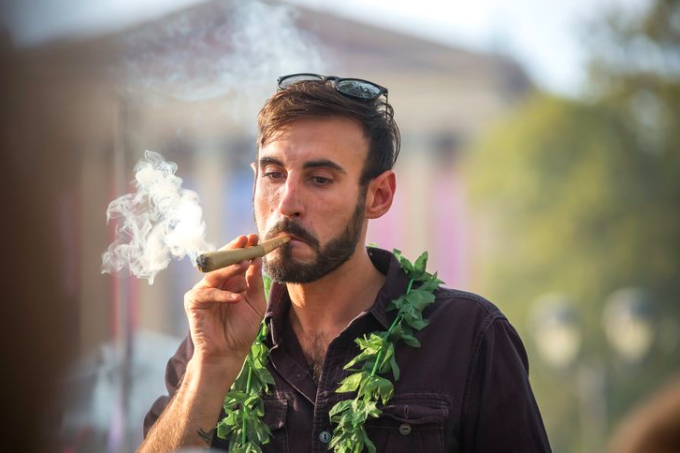 Marijuana activist N.A. Poe will host Pufftoberfest, an event marking the five-year anniversary of marijuana decriminalization in Philadelphia. It takes place from 2-8 p.m. Oct. 20, 2019, at 1717 N. Hancock St. Above, Poe is shown smoking from a large joint at the 'pop-up weed garden' he organized at Eakins Oval in 2017.

Sunday marks five years since Philadelphia decriminalized marijuana, becoming one of the largest cities in the United States to pull back the reins on prosecution of pot.

Don't ever call marijuana activists lazy — least of all N.A. Poe., who's throwing a Pufftoberfest celebration in Olde Kensington to mark the occasion on Sunday afternoon.

One the city's leading marijuana advocates, Poe made headlines in August 2017 when he and 21 others were charged following a Philadelphia police raid of a warehouse in East Frankford, where an adults-only meet up was broken up over marijuana sales.

While the combined 150 pounds of pot and THC edibles seized that night were well above the city's decriminalization limit of 30 ounces, Poe still sees the 2014 law as a sea change in Philadelphia.

"Out of all the s*** that we did with activism in Philly, decriminalization has by far been the crown jewel of our work," said Poe, whose real name is Richard Tamaccio. "Everywhere I go, I smell pot or I see people sitting on a bench rolling something up. I think the blasé attitude we've created toward that is directly tied to decriminalization. Philadelphia is almost unique in the way it became a city where you can just kind of smoke pot wherever you want."

Technically, you can't do that. The law signed by former Mayor Michael Nutter — and originally proposed by current Mayor Jim Kenney — calls for a $100 fine and community service for those caught smoking in public.

Possession of less than 30 grams now warrants only a $25 ticket and confiscation of the drug.

Police issued nearly 12,000 marijuana citations from 2014-2018, a disproportionate number of them in neighborhoods that would suggest a racial bias may be in play, according to reporting this past summer from Billy Penn.

But from a criminal justice standpoint, marijuana arrests in Philly were down by 75% three years after the law was implemented and 85% after four years. The toll has been lifted on families, courts, jails and individual futures.

Mayor Kenney's spokesman, Mike Dunn, said decriminalization is among the important reasons why Philadelphia has been able to reduce its jail population by 40% since 2015. He described it as a common-sense reform that's helping build a safer, more equitable city.

"Decriminalizing marijuana, along with the decriminalization of other minor infractions like disorderly conduct and failure to disperse, enables the Philadelphia Police Department to focus resources on keeping communities and neighborhoods safe from more serious crimes — and it helps reduce disparities throughout the system," Dunn said.

Poe would like to bring pot enthusiasts together to rejoice over the progress that has been made, though much more remains to be done.

"I know I was arrested for throwing a huge party where people were selling marijuana," Poe said. "This is not that kind of party. There won't be that kind of event here again until there is legalization."

'WE JUST WANT TO BE RESPECTED'

Pennsylvania is on the brink of a legislative process that could bring about the legalization of recreational marijuana across the state.

A bill introduced in the state Senate this week would make the drug legal to use at 21 years old, legal to grow privately at home with a permit, legal to order for home delivery and legal to smoke at permitted "use lounges."

Most importantly, the bill provides for automatic expungement of previous marijuana-related criminal convictions.

It's a long time coming for people like Poe, who has championed marijuana legalization, sometimes at great risk to himself, for much of the last decade.

"It's funny to hear (Gov.) Tom Wolf pontificating on everything we've said for years," Poe said. "Look, I know that politicians are going to take years to catch up to things, but now I feel like it finally has caught up. Part of me wants to be bitter, and the other part knows this is what we worked so many years to have."

"It's kind of strange to be doing it as a parent and someone with all these responsibilities, but being a cannabis crusader made me who I am today." — N.A. Poe, marijuana activist

Now 40 years old, a father and a sandwich shop owner (again), Poe isn't complaining about the way things worked out for him. He was initially sentenced to four years of probation, a hefty fine and community service after pleading guilty in the aftermath of the raid.

That probation was eventually lifted after a year, a fact Poe chose to downplay when it happened. He recognizes how much others, particularly people of color, continue to be persecuted for marijuana crimes.

Still, Poe tips his hat to police for faithfully carrying out decriminalization in Philadelphia, for the most part.

"We completely respect what police have done and how they've handled the situation, how the arrests have dropped. Pufftoberfest is in no way trying to rub that in their face," Poe said. "It's that we consider ourselves a sector of the community of this city. We just want to be respected in the same way other groups who fight for their rights are. Cannabis culture shouldn't be stigmatized."

Sunday's event will run from 2 p.m-8 p.m. at the Sculpture Garden at 1717 N. Hancock St. Vendors, a band and a DJ will be on hand to provide food and entertainment. Tickets to the event are $10 in advance and $15 at the door. 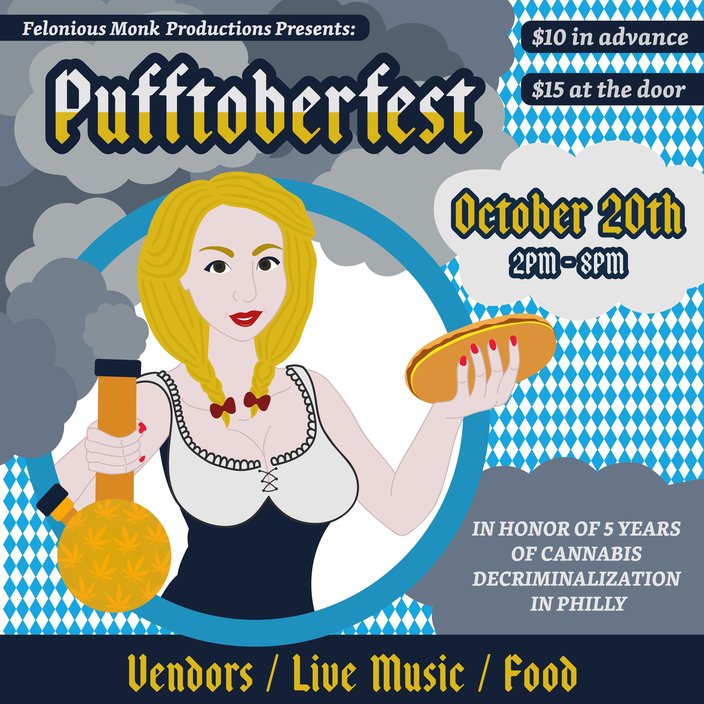 Source/N.A. Poe
Poe's Sandwich Joint, the popular Fishtown sandwich shop that shut down abruptly in July, will even make an early comeback for Pufftoberfest. In the next few weeks, Poe will be reopening the business at 1710 N. 5th Street, a space it will share with Human Robot Brewing when it opens next year.


For now, Poe wants to focus on marijuana and lay the groundwork for a return to activism and events that bring people together around pot.

"It's kind of strange to be doing it as a parent and someone with all these responsibilities, but being a cannabis crusader made me who I am today," Poe said. "It's great to be coming back around to celebrate something instead of fighting."

But with a long legislative battle likely ahead, Poe's energy and experience may be needed to help bring legal marijuana to Pennsylvania.