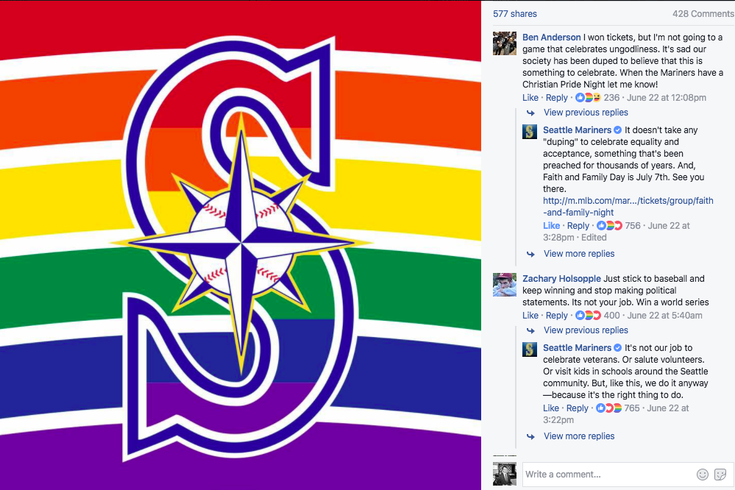 The Seattle Mariners responded to fans who were angry with the team hosting an LGBTQ 'Pride Night.'

When the Seattle Mariners changed the team's Facebook profile picture for Pride Night at Safeco Field Thursday, however, some fans weren't happy about it.

"I won tickets, but I'm not going to a game that celebrates ungodliness," wrote Ben Anderson. "It's sad our society has been duped to believe that this is something to celebrate. When the Mariners have a Christian Pride Night let me know!"

The Mariners' social media team was having none of this.

"It doesn't take any 'duping' to celebrate equality and acceptance, something that's been preached for thousands of years," the team's official account wrote back "And, Faith and Family Day is July 7th. See you there."

Another commenter, Zachary Holsopple, wrote that the team should "stick to baseball" and not make "political statements."

"It's not your job," Holsopple wrote. "Win a world series."

The Mariners responded by noting that the team does a lot of things that aren't their "job."

"It's not our job to celebrate veterans. Or salute volunteers. Or visit kids in schools around the Seattle community," the team wrote. "But, like this, we do it anyway—because it's the right thing to do."

Props to you, Mariners. Side note: The promotional giveaway hat for the team's Pride Night is sweet:

I 100% had to have this @Mariners Pride hat. So I got tickets for the game. Can't wait! #Pride2017 https://t.co/zNCKy8JfDg pic.twitter.com/WWQiYnORzN