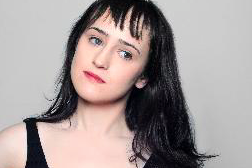 Right up there with shouting fire in a crowded theatre, sticking your face on a hot stovetop and oinking at police officers is publicly proclaiming negative views about the city of Philadelphia, when it comes to impoverished judgment.

The last of these misdeeds was the choice made Monday by a young woman who we all sort of remember from the nineties. Mara Wilson, the 29-year-old former child actress from "Matilda" and "Ms. Doubtfire," took a rueful shot at Philadelphians on Twitter and it did not go well for her at all. (Warning: Many of the tweets below contain explicit language).

Has anyone told Philly people they don't HAVE to be assholes

Like there is no room for people to be walking on the sidewalk in New York. There's room in Philadelphia and yet people are still rude

It's not the same kind of passionate, impulsive, get out of my way "Hey, I'm walkin' here" New York assholitude. It's unearned.

These remarks landed Wilson mainly in the crosshairs of Philly sports Twitter, a terrible place to be on a Monday after an Eagles loss, and at the mercy of a broader discussion about urban "a--holitude."

@MaraWilson rushed or efficient people, but not angry and rude.

@MaraWilson New York looked at Pizza Rat and saw itself. Philadelphia got a cigarette-smoking crab pic.twitter.com/XoTCoYIiUr

@MaraWilson everyone is cold, violent and affectionate, like a mama polar bear

@MaraWilson I'm from Philly. Don't talk about my city that way ya jerk

@MaraWilson as a life long Philly resident- we are not assholes. We r passionate, loud &quick 2act NY gave us Trump.We gave you the Roots.

@MaraWilson "The Gang Runs Matilda Out of Town"

@MaraWilson we are rude af. no question. i kind of like it though.

@MaraWilson it's not us, it's you.

. @MaraWilson maybe people from Philly are tired of people from outside the city telling them that they're assholes?

Desperation is a stinky cologne @MaraWilson

@MaraWilson I was born and raised in Philly, and this rings true. But if everyone around you is an asshole, it just feels like home. ;)

@MaraWilson Philly is basically like "we're loser scumbags and WE'RE FUCKIN PROUD OF IT GO EAGLES YUENGLING!" It's endearing after a bit.

@MaraWilson @jimadair3 - That's what makes our city great .. there's literally no concept of "grey area" in anything we do... haha..

Some people who jumped into the fray were much kinder to Wilson, who's surely entitled to her own opinion (aka...well, yeah, you get the circular point).

@MaraWilson @PhillyGirlGreen we aren't mean, we're passionate about our city and get tired of people shitting on us because "it's not NYC"

.@MaraWilson I think this is true, & my theory is: rowhouses. Rowhouses make us all super-friendly and/or super-hostile (sometimes both). pic.twitter.com/muFrs8vOwn

@MaraWilson what do you think you are gonna get when you put a city on blast? A round of applause?

Y'all. LEAVE @MaraWilson ALONE. She's a gem and doesn't deserve it. Hope we can treat her w/ brotherly love + sisterly affection! https://t.co/Db3rxmSM7w

@samberkhead @MaraWilson We're not all assholes. Just Eagles fans. And everyone else.

These days, Wilson does cameos and spot voiceovers for shows like "Broad City" and "Bojack Horseman," so she's not without some redeeming qualities as an adult. She also recently published a book, "Where Am I Now?: True Stories of Girlhood and Accidental Fame?" that examines the afterlife of a Hollywood cupcake.

Put through the wringer, Wilson emerged with the following summary of events.

I asked why Philadelphia people were mean and I got a bunch of "FUCK OFF, WHO THE FUCK ARE YOU BITCH" answers from Eagles avatars

Man, I wish I were that devoted to where I'm from