Medical examiner in Creato case had troubled history in Massachusetts

His work was faulted in two cases in that state: one famous, one obscure

The Rev. Brian McHugh is stunned by the continuing employment of Dr. Gerald “Buck” Feigin as a medical examiner in New Jersey.

“Why, if he resigned in Massachusetts due to his mistakes, would he be allowed to go to work elsewhere?” the priest asked when contacted by PhillyVoice.

Feigin, a medical examiner in South Jersey for two decades, made critical errors in nearly back-to-back cases in Massachusetts, including a little-known 1997 case involving the priest’s brother, teacher David McHugh. But Feigin is better known for another case in that state that same year: the Boston Nanny trial, televised live from gavel-to-gavel, it’s shocking conclusion released via the Internet because of rapt worldwide attention.

Feigin's work is currently being questioned in the case of Brendan Creato, the three-year-old Haddon Township boy found dead last October. His father, David “DJ” Creato, is charged in his murder.

At a hearing at 1:30 p.m. Monday, a Camden County Superior Court judge will consider whether questions about Feigin’s investigative actions are enough to dismiss the murder charge against DJ Creato. Medical examiners did not go to the scene where the child's body was found until days later, and it appears his office's death investigator did little more than transport the body from the scene.

The judge also will consider a second motion by the defense to suppress evidence, primarily from DJ Creato's cellphone.

Though the pretrial legal motions are unlikely to prevail, Feigin has at least twice been the medical examiner in death cases where charges were either radically reduced or dismissed outright.
In the best-known case, which was largely presented as a shaken baby murder case by another pathologist and the prosecuting attorneys, Feigin had insisted a sudden impact killed Matthew Eappen, the eight-month-old child in the care of Louise Woodward, a British au pair.


Feigin, who performed the Eappen autopsy as a member of the state medical examiner's office in Boston, told a grand jury that the child was dropped from a height of 15 feet. But in trial court he sharply reversed himself, instead testifying a fall of as little as two feet may have caused the boy’s skull fracture.

With Feigin’s testimony deflated by noted defense lawyer Barry Scheck, Judge Hiller Zobel eventually vacated a jury finding of murder and a mandatory life sentence against Woodward. Finding the child’s injury did not show the nanny intended to harm the boy, the judge instead convicted her of involuntary manslaughter and freed Woodward on time served, 279 days.

While the parents of Matthew Eappen, the trial judge and the lawyers on both sides of that case are not speaking for the record, the nanny case dominated press coverage for weeks and lives on in books, texts, classrooms, video and online.

On the other hand, the McHugh case from Massachusetts remains obscure, a lightly-reported story covered in just two newspapers. Media accounts are nearly nonexistent online.

In some ways, Feigin’s errors in the McHugh case would appear more egregious than in the Woodward case.

Feigin resigned on May 5, 1998, just as the McHugh case was heading to trial in adult court, with a wrongly-charged 14-year-old juvenile facing a 20-year prison term if convicted.

Feigin was hired in New Jersey the following month by Gloucester County, which currently shares his services with Camden and Salem counties. Through his office, Feigin declined to comment directly for this story.

But Debra Sellitto, a spokeswoman for Gloucester County, said "Dr. Feigin has served Gloucester County with the utmost professionalism over the past 18 years. In the last 10 years alone, Dr. Feigin and the Medical Examiner's Office have investigated more than 20,500 cases, performing thousands of autopsies for Gloucester, Camden and Salem counties."

A spokesman for the Camden County Prosecutor's Office had no comment.

“All I wanted was the truth, but they were afraid we would sue.” – the Rev. Brian McHugh, on seeking answers in his brother's death

Feigin quit his job in Massachusetts just after an independent pathologist reviewed his autopsy examination in that lesser-known case. That’s when it came to light that Feigin had failed to do a standard autopsy examination of the heart of David McHugh, a 34-year-old middle school teacher and counselor who was kicked in the head after breaking up a school fight.

Scott Bratton, Rivera’s lawyer, told PhillyVoice during a recent interview that Feigin’s autopsy was “incomplete.” The medical examiner's oversight was compounded by “inaccurate testimony” that Feigin had given to the grand jury which indicted Rivera, the lawyer added.

Bratton told the Lowell Sun newspaper on the day the manslaughter charge was dismissed: “The medical examiner took a shortcut and he got caught.”

Feigin had told the grand jury he’d examined McHugh “from his brain to his pelvis,” Bratton said in legal papers.

But the doctor neglected to explain to the jury he merely looked at McHugh’s heart with his naked eye, did no dissection, and took no tissue samples for microscopic examination.

“We were able to prevent an insane injustice, sending a 14-year-old to men’s prison for 20 years,” said Bratton, who practices in Lowell.

Rivera was subsequently convicted of assaulting McHugh with a deadly weapon – his shod foot – and served time in a juvenile facility.

Bratton was so concerned by Feigin's errors in Massachusetts that he said he took the extraordinary step – two decades ago – of sending a letter and court papers to the New Jersey Office of the Public Defender's office to warn those court-appointed lawyers about Feigin's past. A spokesman for the Defender's Office said he could not confirm receipt of Bratton's letter given the passage of time. 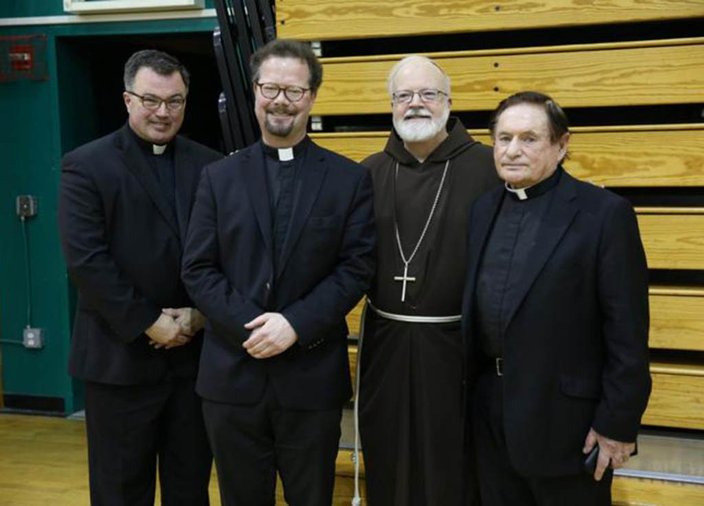 The Rev. Brian J. McHugh, left, and other priests are honored by Cardinal Sean O'Malley, second from right, in April 2014. McHugh's brother, a teacher, died from injuries sustained while he tried to break up a fight on school property in March 1997. The pastor said mistakes were made by medical examiner Gerald Feigin, who performed his brother's autopsy. “Why, if he resigned in Massachusetts due to his mistakes, would he be allowed to go to work elsewhere?” he asked.

“Watching the TV shows and reading the novels, we think medical examiners and the system are infallible,” said McHugh, a Roman Catholic priest and a pastor of a parish in Somerville, Massachusetts.

McHugh said he thought Feigin had been fired by the state of Massachusetts as a result of his brother’s autopsy. The priest had no idea that Feigin had been the medical examiner in the nanny case and then moved on to New Jersey.

McHugh said he tried seeking answers, but no one in Massachusetts, from the governor to the medical examiner’s office, would talk to him.

“All I wanted was the truth, but they were afraid we would sue,” said McHugh.

A spokeswoman for the Office of the Medical Examiner in Massachusetts declined to answer any questions about Feigin’s cases. She also refused to more generally discuss how medical examiners who make mistakes, are dealt with by the state.

Elliott Weinstein, a prominent defense lawyer in Boston, had called for a review of every case in Massachusetts that involved Feigin after his errors were exposed.

“I would say the same thing today,” said the former president of the Massachusetts Association of Criminal Defense Lawyers.

Weinstein said Feigin's work in the Woodward case was "inept, incompetent and incomplete."

The lawyer added he believes medical examiners who make mistakes should be sanctioned. “After all, it’s only someone’s life,” Weinstein added.

“The system needs to be tweaked and fixed. It was just his laziness,” said McHugh of the mistakes Feigin made in his brother’s case.