Trump made controversial statements about immigrants while announcing his presidential candidacy 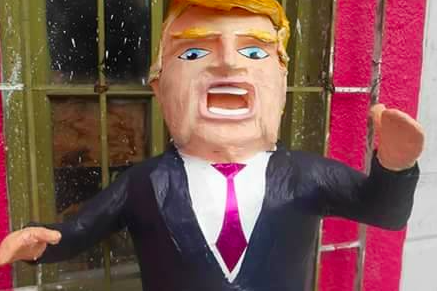 During Trump's campaign announcement speech, he called Mexican immigrants "rapists," said they're bringing drugs and crime to the U.S. and proposed building a Berlin Wall-type wall to keep them out.

I like Mexico and love the spirit of Mexican people, but we must protect our borders from people, from all over, pouring into the U.S.

Ramirez, a craftsman from the Mexican state of Tamaulipas, told The Independent he created the piñata to mock Trump and give his fellow Mexicans a method to take out their frustrations.

"It was a way of expressing disagreement of what he said about us Mexicans," the artist said. "Donald Trump should not promote racism against Mexicans or Latinos in America."

According to Fox News Latino, the piñatas are priced at 500 pesos apiece, or roughly $40.

Read the full article in The Independent here.