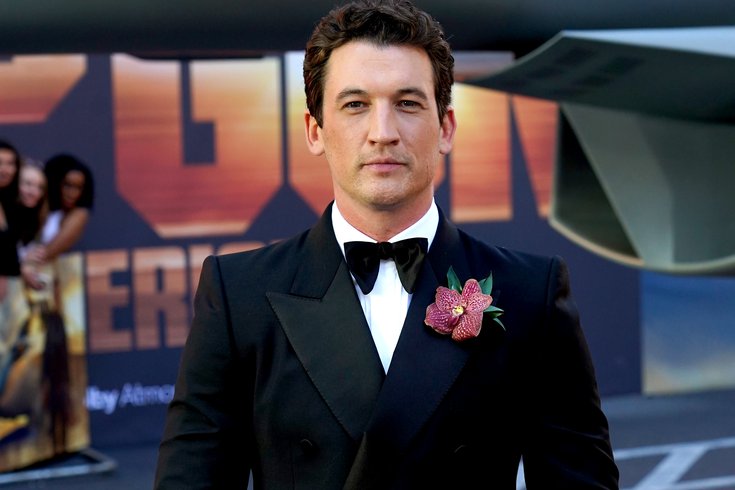 Miles Teller is set to host the upcoming 48th season premiere of "Saturday Night Live." The actor will be joined by musical guest Kendrick Lamar on Saturday, Oct. 1 at 11:30 p.m. on NBC.

Miles Teller will be landing on one of the biggest stages in late night comedy next weekend, as the actor is set to be the first guest host for the upcoming 48th season of "Saturday Night Live."

The Downingtown native, who played Tom Cruise's protege in the smash-hit film "Top Gun: Maverick," will be joined on Saturday, Oct. 1 by musical guest Kendrick Lamar, who is making his third appearance on the sketch comedy show.

SNL took to social media on Tuesday to announce the guest lineup for the first three shows of the season. Teller reposted the iconic sticky note pinned to a cork board, which featured his name, on Twitter.

This is Teller's first time hosting SNL, coming off the success of "Top Gun: Maverick," a follow-up to the 1986 action classic about elite U.S. Navy aviators. The internet exploded over Teller's mustached portrayal of a pilot nicknamed Rooster. The film is the biggest 'part two' sequel of all time, based on its raw global worldwide grosses, which surpassed the $1.45 billion global gross of "Frozen II."

Teller also starred alongside Chris Hemsworth in this summer's "Spiderhead" movie on Netflix. Before that, he has been in movies spanning a variety of genres, such as "Only the Brave," "Whiplash," "War Dogs," "Footloose," "The Spectacular Now" and the "Divergent" trilogy. He also starred in fellow Pennsylvania native Taylor Swift's 2021 music video for "I Bet You Think About Me (Taylor's Version) (From the Vault)."

Not only did Teller grow up visiting the Jersey shore – a place he has frequented as recently as last month when he took photos with employees at The Ugly Mug in Cape May – he also is a huge Philly sports fan. Teller has often expressed his support for the home teams, posting a tribute to the Eagles during their home opener on Monday.

He has also showed his love in person. In June, he threw out the first pitch at the Phillies game during "Top Gun Night," when the first 1,500 fans who bought tickets received an exclusive Miles Teller "Rooster" bobblehead donning a Phillies cap.

In a 2017 Q&A with PhillyVoice, Teller discussed his love for sports and fond memories of growing up on the East Coast. When asked what he missed most about Philly, he said:

"I just love the East Coast. The northeast is just such a great place for sports. You go to a bar and talking to a girl, she can rattle off two or three relief pitchers, let alone the position players. It’s just such a part of the culture. And I miss blue crabs. My dad used to always go to Dinardo’s and get a couple of jumbos. I miss Old Bay being on frickin’ everything. And then I grew up in Cape May, New Jersey for a long time. So I love the shore. Wawa."

Perhaps Teller will be the next celeb to grace the Eagles stadium this season.