League and facility make it possible for disabled to play ball 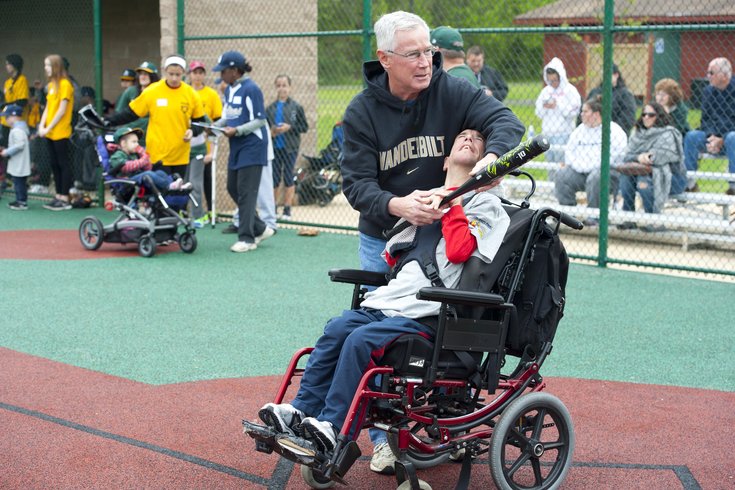 Bob Weatherill and his son, Kyle, take the field for the start of another season of baseball at Boundless Field, part of the Camden County park system.

Bob Weatherill chokes up with emotion when asked what the start of a new Miracle League baseball season means for his 37-year-old son, Kyle, who was born with cerebral palsy.

Weatherill pauses, looks away, considers for a long moment, then swallows hard and answers, “It’s great for both of us.”

“We both need this,” he adds, watching with his son as the new season kicked off Saturday at Boundless Field in Cherry Hill.

“He knew he was coming all week and he was very excited. It’s given him a sense of his own independence. He feels like he participates.” – Lori Wetherill, on her son, Kyle, who plays in the Miracle League

Kyle, whose speech, as well as his movements, are limited, lit up for the past few weeks at the thought of returning to Challenge Grove Park, a 17-acre Camden County park built for maximum accessibility. Kyle, who uses a wheelchair, had to wait another week after rain postponed the opening last weekend.

Kyle has a twin, Kevin, born without disabilities. From the time the two boys were five, until Kevin entered high school, Bob and Kyle went together to every one of Kevin’s games.

Bob says he and his son together coached the teams on which Kevin played.

Then father and son coached some of the older kids who’d come up on his teams.

Two years ago, the Weatherills, who live in Swedesboro in Gloucester County, discovered Boundless Field and the Miracle League.

“He knew he was coming all week and he was very excited,” says his mother, Lori, who watched from the stands with other family members.

“It’s given him a sense of his own independence. He feels like he participates,” she adds.

“We don’t have a lot of options,” says Bob Weatherill.

Kyle seems excited to see players he has met before.

While each member of his team has a unique health background, their shared love of the game binds them together.

“He knows the stories of several of the players,” says Bob Weatherill.

The field sits next to Jake’s Place, with a playground where all children can play and basketball courts designed for wheelchair athletes.

And while the new baseball season is underway, there’s also a short fall season that is looking for more participants, says Jim Cummings of the Camden County Miracle League.

The group is also always looking for volunteers to organize the games, act as buddies in the field and even coach.

That’s how Steve Hasset of Mount Laurel became a coach, even though he does not have a child participating in the league.

“I do it for the pure joy," he explains, hustling off to help another player.