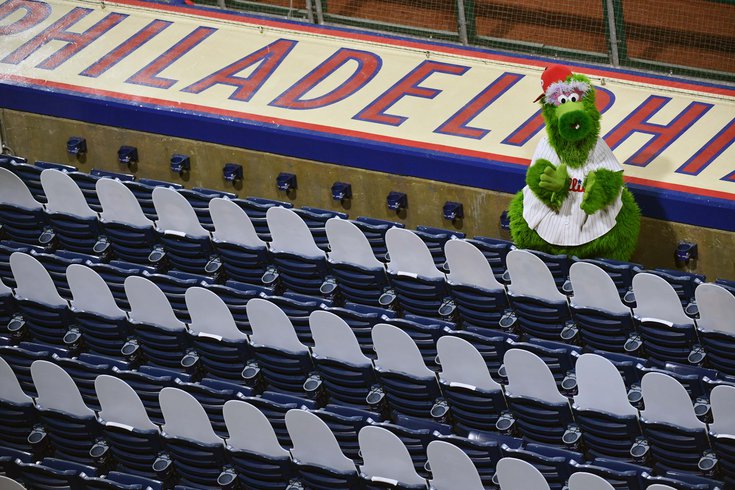 If the Phillies don't hire a GM soon, this guy is going to have final say over the roster. Those are just the rules. I don't make them up.

The MLB offseason has been pretty quiet so far, which isn't that surprising considering, a) free agency typically moves at a slower pace in baseball than it does in other sports and, b) the financial uncertainty created by COVID-19 has made teams hesitant to make any big financial commitments before getting a better grasp on their bottom lines for 2021.

Eventually, at some point, the signings will pick up and there will be some news to report. But for Phillies fans, a slow, quiet offseason might be what they should get used to.

According to The Athletic's Jayson Stark, whose local ties make him even more of an authority on the Phillies than he already is nationally, Philly is expected to wait out free agency and avoid making splashy moves like they have in recent offseasons. And, apparently, that could include J.T. Realmuto, who recently turned down his qualifying offer and is now free to sign with any team.

But now the stakes have changed, after a season in which the Phillies have told their employees they lost significantly north of $100 million. So the team has sent signals to agents and other clubs that it doesn’t expect to be a major force in free agency.

What’s more likely, say those who have spoken to the club, is a strategy to fill multiple holes by shopping for free-agent bargains later in the winter. So on one hand, the Phillies remain interested in bringing back Realmuto. But on the other, they could also shift gears and focus on trying to create financial flexibility moving forward.  [theathletic.com]

It sounds there like the Phillies view it as one or the other: either they re-sign Realmuto or they address the various other deficiencies on their roster with a series of smaller signings. That's not likely to get the fanbase excited.

But don't worry, fans, the Phillies still have a plan to get you all on board for the 2021 season.

Part of the reason there's so much uncertainty about the organization's plans this winter is because they currently have an interim general manager in Ned Rice and a lame duck president in Andy MacPhail, who has already gone on record as saying he's fine with the team replacing him, and either way will be stepping aside at the end of next season.

So, while the Phillies look for much-needed roster upgrades, they'll also be searching for replacements for the guys who are, at least for the moment, tasked with making those upgrades. But that could change, according to Stark, as the team seems poised to ramp up its search for new front office leadership, with a focus on a replacement for MacPhail before finding a full-time candidate to take over Matt Klentak's old job.

According to sources who have been in contact with them, the Phillies expect to begin interviewing executives to head their front office as soon as next week. So after all these weeks in which their plans were a source of public mystery, it’s now apparent, said one of those sources, that they have “a lot of balls in the air.”

In the month and a half since they demoted Klentak, few people in baseball, aside from team president Andy MacPhail and managing partner John Middleton, seemed to have any knowledge of the Phillies’ plans. But in recent days, as they’ve begun the process of asking permission to speak to candidates who work for other clubs, the team’s search is beginning to come into wider focus outside its own inner circle.

According to industry sources, the Phillies are focusing on hiring a new president of baseball operations, while leaving their GM opening on the back burner. They have been trying to gauge the interest of a small group of experienced, highly regarded baseball people with proven, winning track records. Sources say they have asked for an answer from their remaining uncommitted candidates within the next week, if possible.  [theathletic.com]

Stark went on to say that the Phillies, who are currently +3500 to win the World Series at FanDuel according to TheLines.com, are looking for "the front-office equivalent of Joe Girardi," and that "almost anyone who has ever led a team to a World Series is likely to be on" their wishlist. Who might some of those names be — and who is in charge of putting said wishlist together? I highly recommend clicking over to read Jayson's full story, which has a ton of info on the Phillies' search as well as their free agency plans.

In the meantime, we wait. And while we do, we've got you covered with all the latest news and rumors regarding not only MLB free agency, but the Phillies' front office search as well right here in our live tracker...