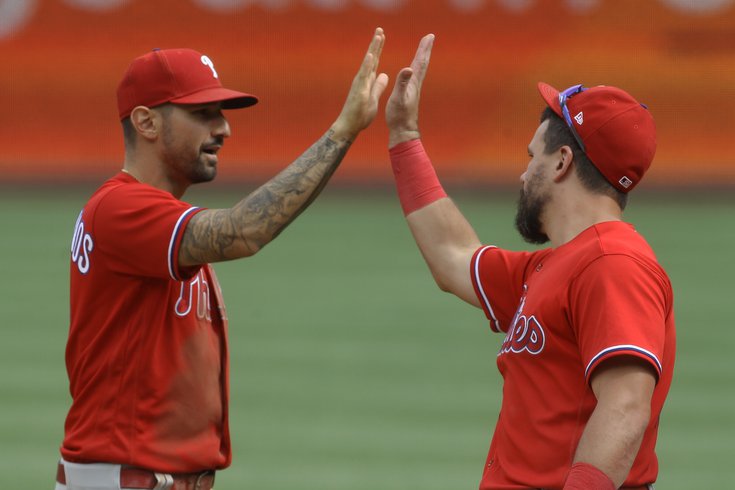 What will the Phillies do at DH to start the season?

If you missed the news amongst the holiday madness over the last few days, Bryce Harper underwent successful Tommy John surgery on his right elbow and will be out until around the 2023 All-Star Break. He's expected to return as the designated hitter, like he was at the end of 2022, until he's able to throw and play right field again toward the end of the season.

So the Phillies are going to need a new DH for about three months.

Chances are the team is going to have a more flexible lineup next season, using the DH to give players the day off or to give manager Rob Thomson the best matchups he can get offensively. But there will be a primary lineup and DH. Who's role will it be?

This is certainly a new factor for Dave Dombrowski and the Phillies' front office to consider as they look to upgrade the World Series runner-ups for another title run this coming season.

The Phils have a bunch of guys on their payroll right now who can be the designated hitter. Kyle Schwarber, Nick Castellanos ad Rhys Hoskins are the leading candidates, based on their impressive offensive contributions and their, well, less than stellar work in the field.

Assuming you'd want to bring in someone who plays well on defense and shift the worst defensive player to the DH role, here's a look at the glove work of the aforementioned trio last season:

Hoskins is the worst fielder by way of total mistakes — his 12 errors at first led all of baseball in 2022. Schwarber and Castellanos didn't make too many errors but they are limited by their ability to get to baseballs or throw out runners.

So who will be playing the field? The Phillies currently have a bunch of outfielders on their roster, but would they be comfortable with Matt Vierling, Brandon Marsh and one of Schwarber or Castellanos populating the outfield — with the other playing DH?

It certainly would be surrendering some offense. Vierling and Marsh combined for just nine home runs and 47 RBI in 495 plate appearances last season. That duo is better off as a righty-lefty platoon in center than two entire spots in the batting order. The Phillies could have a new need in free agency, then: a fourth outfielder.

The problem here is, they can't spend too much. While depth would be monumentally helpful, in an ideal scenario, a new outfielder would be out of the lineup by July, when Harper returns.

Who might be cheap enough to be an outfield rental?

He's a career .259 hitter who had a down year in 2022 and could be affordable as a fourth outfielder. He is good in the field and has three 20-home run seasons.

An even better hitter — .276 over 11 seasons — Pollock is a former gold glove winner and a veteran with postseason experience who can play all three OF spots.

The oldest option Carpenter is coming off a season where he hit .305 for the Yankees over 47 games. He is a three-time All-Star.

Many Phillies fans would be very happy to move Hoskins to DH, as his clutch hitting in the postseason helped to overshadow his continued bad defense. Hoskins at DH would put both Schwarber and Castellanos in the outfield, like they were in the postseason. The defense in the outfield was passable and Castellanos actually made some highlight catches.

But who would play first? If the Phillies are able to ink a big-name infielder, as rumors suggest they are wanting to do, it's possible they go with an infield comprised of Alec Bohm at first, Bryson Stott at second, Trea Turner or Carlos Correa or whoever at shortstop, and Edmundo Sosa at third.

There are a lot of DH-ready free agents out there, and if the Phillies are content to keep the infield intact, with Hoskins at first, Bohm at third and a free-agent signee at shortstop, they might need to bring in another big bat.

This move would be in line with the team's offseason philosophy last spring, trying to load up on big bats and not worrying too much about a less than average defensive team.

A few DH types are out there to be signed:

This would be the splashiest DH play. He's a five-time All-Star — including the last two seasons in Boston. He has a career .288 average and hit 40 doubles each of the last two seasons. The Phillies would need to find ways to keep him in the lineup when Harper comes back.

Turner is another older option but he has hit .289 over an impressive 14-year career and he has a lot of playoff experience. He also has four 20 home-run seasons.

A former Phillie, Santana is a true outcome-type player with a low batting average who hit 34 home runs three years ago.

Cruz has nearly 500 career homers over his 18 seasons and if he returns for year 19, he could be a bench DH-type bat.

The Phillies are wanting to spend their cash reserves on an infielder, and a starting pitcher. One obvious cheap choice is Darick Hall, who was an impressive contributor last season filling in for some injured Phillies. One simple solution could be to elevate him to DH and keep the defense largely intact.

If the team elects to abstain from adding a third big-name free agent and doesn't feel comfortable with the defense as is (with Hall at DH), they might be open to bringing up a minor leaguer to play in the field so that they can move Schwarber, Castellanos or Hoskins to the DH spot.

Johan Rojas and Jhailyn Ortiz are two young outfielders currently sitting on the Phillies' 40-man roster. The team would love to have more homegrown talent, and if either is able to succeed in spring training, it's possible one of them breaks camp as a starting outfielder, allowing either Schwarber or Castellanos to DH the first half of the year.