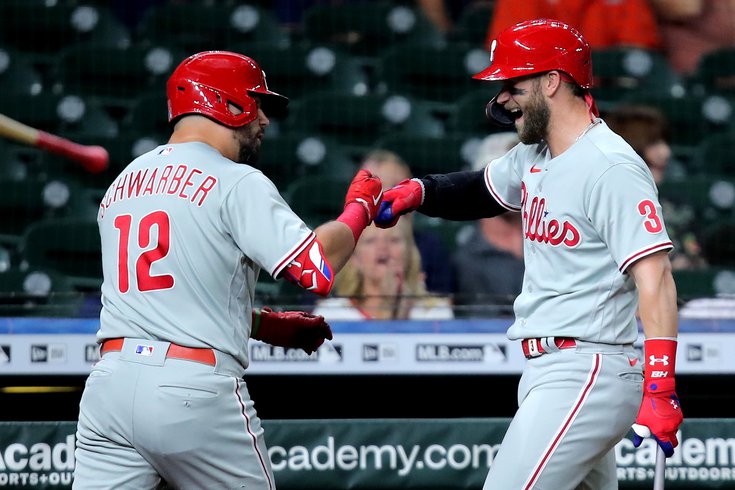 Kyle Schwarber led off the most memorable Phillies night in forever with a big ol' Schwarbomb:

He crushed another one in the eighth too:

That's why the Phillies opened up their wallets for Schwarber this past offseason: to hit a million dingers and get them back in the playoffs. Schwarber's 46 homers so far this season are the sixth most in a season in Phillies history (via Stathead):

Among other highlights of the evening, Bryson Stott hit a solo homer in addition to Schwarber's two bombs. Aaron Nola took a perfect game into the seventh inning, finishing with nine strikeouts, two hits and zero walks in 6.2 innings of work.

The Phillies will have their first postseason game in 4,018 days, exactly 11 years to the day, on Friday. If they stay in the third Wild Card spot they currently occupy, they'd head to St. Louis for a three-game set with the Cardinals. It was the Cards, of course, who eliminated the Phils in the 2011 NLDS. If the Phillies are able to jump the Padres for the second Wild Card spot, they'd face the Mets, who now hold the top Wild Card seed in the NL.

The Phillies would need to win that best-of-three road series to advance to the NLDS proper.

Here are the Wild Card standings as of this writing:

This is something I've never been able to write and publish in my journalistic career: It's going to be a Red October this year.