Mom in Friendly's incident: 'I'm not ashamed of my son' and his autism 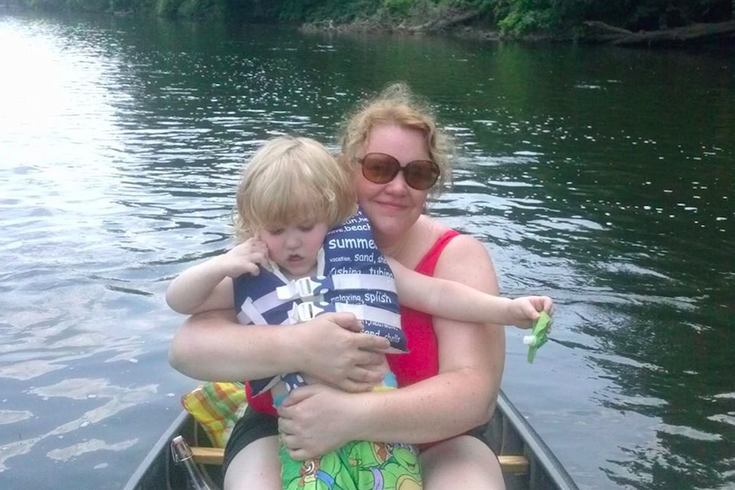 Teri Jensen-Sellers and her son, Lind, who was diagnosed with autism at three years old.

Teri Jensen-Sellers wants the world to know she's not ashamed of her autistic son.

Earlier this month, Jensen-Sellers took five-year-old Lind and his older brother Dane to the Friendly's restaurant in Pottstown for a bite to eat on a Saturday afternoon. Lind was diagnosed with autism spectrum disorder two years ago and is partially non-verbal. Dane, 10, is a neurotypical child.

Prone to symptomatic fits of crying, Lind became upset and noisy for a period that Jensen-Sellers said lasted about seven minutes. The restaurant manager eventually came over to the family and told Teri that they had to leave.

"People are looking at you," the manager told Jensen-Sellers, according to the story first reported by WFMZ-69 in Allentown. "Your child is crying excessively. You have to leave."

Insulted and discouraged, Jensen-Sellers took her boys and left at the manager's insistence.

Since then, it's been a whirlwind of emotions for the courageous mother, a sociologist who teaches courses at Albright College in Reading.

"I'm just disgusted," Jensen-Sellers told PhillyVoice on Tuesday. "To me, this just seems like the next step in American civil rights. We look at gender oppression, then racial oppression. Society has this tendency to marginalize the other. Right now, that's special needs children. It's a wicked cycle."

After the incident on October 8, Friendly's corporate office reached out to Jensen-Sellers to assure her that employees and managers would have future training to handle challenging situations involving children with special needs. The manager at the Pottstown location offered a regretful apology and an invitation to come back.

"I wanted an apology," said Jensen-Sellers, "but I also want to raise awareness."

She didn't immediately call out to the media to publicize the story, but she felt the episode was dehumanizing. Her sister eventually put her in touch with a reporter she knew. As the story created enormous waves online, a district manager for Friendly's told The Mighty — a mental illness advocacy website — that the company will hold a fundraiser during World Autism Day in 2017.

Despite that report, Teri said she wasn't told personally that the funds are to benefit a charity of her choice.

'SEEN AND NOT HEARD'

What happened at a family restaurant in Montgomery County could happen just about anywhere, whether it involves a child with special needs or another kid whose behavior is considered socially disruptive. It's become a routine concern for parents in the autism community, whose numbers have risen dramatically over the last several decades. as diagnostic criteria shift to encompass the broadest spectrum of related neurological disorders.

In November 2015, a new survey of U.S. parents released by the Centers for Disease Control & Prevention found that as many as one out of every 45 U.S. children between the ages of 3 and 17 has autism, higher than the official U.S. estimate of one in 68. Much of this has been attributed to a recent change in how autism is diagnosed. In Philadelphia, researchers at Drexel University and The Children's Hospital of Philadelphia are leading the charge into understanding whether there may be environmental causes linked to the surge in prevalence.

Jensen-Sellers says she was heartbroken and devastated when Lind was first diagnosed.

"You want the best for your children," she said. "But I had to make a mental shift, and I've accepted this. I have to teach other people to be compassionate."

For a person who studies the workings of society as a profession, it's been hard for Jensen-Sellers to untangle the regretful incident from the pain it has caused her and her family. When she steps back, removing autism from the equation, she sees what happened as a reflection of our attitudes toward children.

"It makes me think of this historical aspect of parenting, especially in this country, this puritanical idea of parenting where children should be seen and not heard," Jensen-Sellers said. "Spare the rod, spoil the child. It's this mentality that children are not whole beings, that they don't have rights because they're not grown citizens."

Questioning this doesn't equate to giving kids free reign, Jensen-Sellers is quick to point out.

"It's not that children shouldn't have boundaries and consequences, but there are some types of authoritarian parenting that become part of our social conscience," Jensen-Sellers said. "Is it really what's best for our children?"

'THEY WANT TO BE UNDERSTOOD'

Being a progressive mom — not a snob, but someone who stands up for her beliefs — has often meant that Jensen-Sellers keeps a healthy distance from the teeming vitriol found in every corner of the internet. Going public with her story meant facing it head on.

Comments left on Facebook feeds and articles have been ruthless in some instances.

"I can't keep reading them," Jensen-Sellers said. "It's unfair. I forget how rude and crude and ignorant some people are. They're so quick to judge what's going on. How dare you? Have you ever loved someone with autism? What if your child or your grandchild had autism? Would you say that about your child?"

It comes down to an unwillingness to understand the nature of a common medical condition.

"Lind was crying because he has a neurological disorder and he's frustrated that he can't communicate," Jensen-Sellers said. "People should be informed about what's going on with an autistic brain. They want to be heard. They want to be understood."

What about the people who argue she shouldn't take an autistic child out to a restaurant?

"I have another child who's 10 years old and I have to think of him as well," Jensen-Sellers said. "He deserves to go out to eat and see a movie. Many special needs families live as hermits. They're so sick of being judged and leered at that they shut themselves off from typical society. I understand their apprehension, but I refuse to live that way. It's not fair to my family and I'm not ashamed of my son."

In fact, Jensen-Sellers said, the more Lind goes out, the better he is in public. That's the fundamental goal of treating children with autism.

"We don't lock them in a room and throw away the key," Jensen-Sellers said. "We're trying to immerse them in society and give them life experience."

As life returns to the never-quite-normal of being an autistic parent, Jensen-Sellers said she and her husband may look to take on some advocacy work in their spare time.

The flip side to all of the negativity she encountered is that others in the community have reached out.

"I've had so many autistic moms and dads who have reached out and thanked me for advocating for our children," Jensen-Sellers said. "There has been a lot of support. I belong to a couple of autism support groups on Facebook and I've heard from some incredibly supportive mothers."

"We have to advocate for each other and stick together." – Teri Jensen-Sellers

One organization, Autism Eats, even called to invite Jensen-Sellers to participate in their group functions, which work by reserving private rooms at restaurants for families who have children with autism.

"While I really love that idea, I don't think that's the only time I'll go out with my child," Jensen-Sellers said. "I'll still take Lind wherever I want."

Explaining the whole situation to Lind and Dane hasn't been easy.

"Dane understands and so does Lint, to a certain degree, about feeling hurt or mistreated," Jensen-Sellers said. "I explained that society doesn't understand about spectrum kids and that we need to educate. What matters is that mommy and daddy know about the spectrum and we love them very much."

For Dane, it's a challenge that will last a lifetime, but one that Jensen-Sellers believes will be both rewarding and redemptive.

"I told Dane that kids on the spectrum have unpleasant realities," Jensen-Sellers said. "We have to advocate for each other and stick together. I make sure I have time alone with him so that he isn't so overwhelmed."

There's also plenty of optimism for Lind, who's developing into something of an outdoorsman.

"We have the highest of hopes for Lind," said Jensen-Sellers. "There are all types of therapies. We're looking into equine therapy because he loves animals. He lives to swim and hike. He likes being in the garden with me. We just have to stay hopeful and be open to different things."

More than anything, Jensen-Sellers wants to make it known that Lind — and all of the children like him — have hearts and minds.

"He's such a sweet person," Jensen-Sellers said. "He's very affectionate. He shakes hands. He high fives. There's a person in there and I hate that society just kind of thinks that they're not here. They are here. They just don't communicate like you and I do.

"I actually believe that Lind is making me a better person."