Moving on to the next one: Player grades and analysis for Chicago 3, Union 0 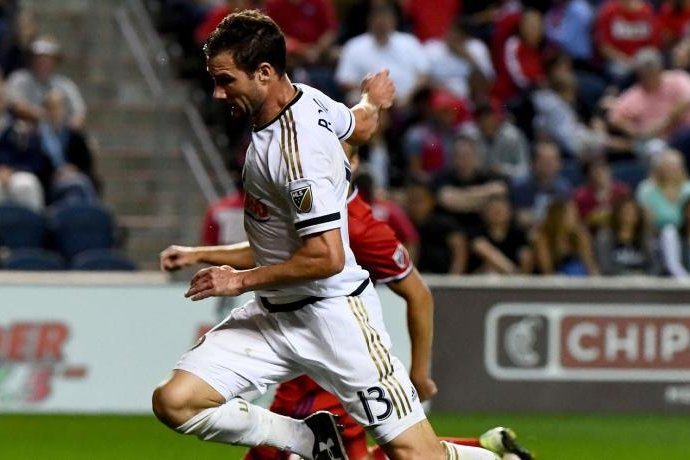 Chris Pontius battles for the ball during the Union's 3-0 loss in Chicago on Saturday night.

The Chicago Fire scored seven goals against the Philadelphia Union this season.

The Chicago Fire have only scored 32 goals. That's in the bottom third of MLS teams.

So, if you do the math, Chicago has scored 22 percent of its goals against Philadelphia.

It's a head-scratcher, isn't it?

Chicago is one of the weakest teams in Major League Soccer, yet they won two out of three against the Union this year and held clean sheets in both victories. This is a team with just six total wins and a negative-eight goal differential. They are still six points out of the final playoff spot and hold a points-per-game total of one.

It's parity, right? There are no “easy” games. Anybody can beat anybody, which is what we learned from the 1999 blockbuster film, “Any Given Sunday”. Even when you're riding a three-game losing streak, and your veteran quarterback (Dennis Quaid) is out with a concussion, it's never too late to add new players (Jamie Foxx) and turn your season around.

Maybe the Fire can pull a Miami Sharks and make a late playoff push.

As for the Union, they should just forget about this game and move on to the next one.

Anatomy of a quirky goal

It's tough, honestly, because he was in the right place at the right time and made a really nice defensive read.

On the replay, watch him recognize the late run and stay with the play. He looks to put in a goal-saving tackle, only to miss high and catch the ball with his trailing leg instead. The ball takes a weird hop and skitters past John McCarthy.

Polster starts it off and @ChicagoFire go up 1-0 after some deflections in the box. #CHIvPHI https://t.co/CJwH3ptoBk

One of the knocks on Alberg has been his lack of two-way awareness this season. We've seen him score a lot of goals, but can he defend, press, and aid the shape the same way that Tranquillo Barnetta does?

This sequence starts with Arturo Alvarez receiving the ball in a wide area and making a slashing inside run. That drags Keegan Rosenberry and Warren Creavalle across the field and opens a lane for defensive midfielder Matt Polster. With Barnetta out of the play, Alberg recognizes Polster's run and tracks back to cover.

In the second freeze-frame, Polster receives the ball and finds himself in front of Richie Marquez, who has stepped up to cut him off. That leaves Ken Tribbett 1v1 with Michael de Leeuw and Fabinho 1v1 with John Goossens.

Polster, to his credit, plays a brilliant little ball to spring de Leeuw. Tribbett looks to have the center forward covered, but de Leeuw slides inside to reach the pass. Alberg continues his recovery run, leaves Polster, and looks to be in position to snuff out the threat. Instead, he just misses on the tackle and it takes that horrible bounce.

You could spread it out a bit.

Alberg does botch the tackle after a good read. Tribbett might have been able to bracket de Leeuw better. He doesn't necessarily need to come further inside because Alberg is in position to clear. Marquez could have closed the space more quickly. Could McCarthy have done better?

Either way, it's an excellent bit of passing from Chicago, who really carved open the Union shape with precision.

Barnetta has to play the 10

As good as he's been this season, there is a noticeable difference when he drops from the ten to the eight.

I feel like Barnetta plays the ten a bit differently than other guys across the league. He won't necessarily dissect a defense like a Mauro Diaz or a Javier Morales. What he does is press intelligently, win fouls, and become stronger as the game goes on. His elite positioning is much more effective when he's further up the field.

Whereas other tens can find that “dagger” of a pass, Barnetta is a grinder. He'll win the war of attrition.

Here's Barnetta's chart from Saturday night. He finished with two shots, one shot on goal, and one key pass on 49/57 passing. Defensively, he added five recoveries and one clearance. He won one foul, conceded one foul, and went one for three on dribble attempts. 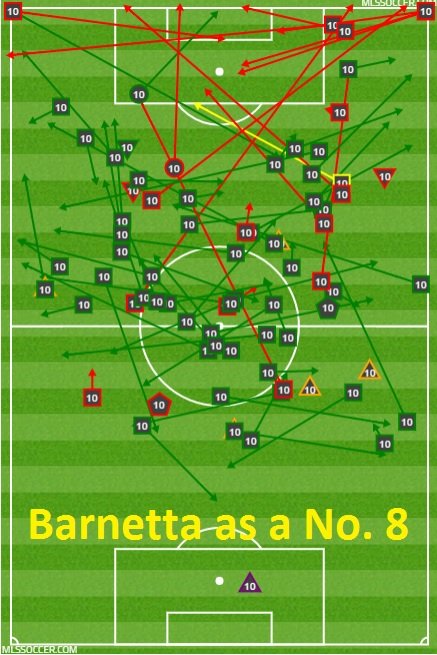 Notice the average positions he occupies on the field. He did get forward in the second half as the Union were chasing the game, but a lot of those passes took place around the middle third of the field. That's the job of the No. 8, to shuttle the ball between the lines and hold the formation together.

For comparison, here's Barnetta's line and chart from the 2-0 home win against Sporting KC. 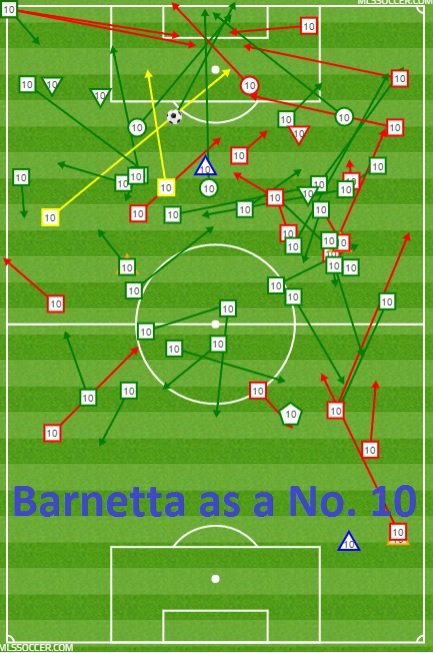 Barnetta had the stoppage time goal in this game. He lead the team with five shots, four of which were on goal. He went 27/41 in passing with two key passes. Defensively there were two interceptions, three recoveries, and he drew one foul. Barnetta went three for four on dribble attempts.

Again, he'll get fewer touches as a number ten, but he can operate closer to goal. No duh, right?

Well, compare his defensive numbers in these two games; there's not much difference. Barnetta usually logs the same amount of clearances, interceptions, and recoveries in both positions, even though the eight requires more defensive discipline. See that blue triangle just outside the Sporting 18? That's an interception caused by a press. The green, inverted triangles are dribble attempts in the final third. That means he's running at defenders.

One more chart now, this one from the 2-1 win at Columbus. 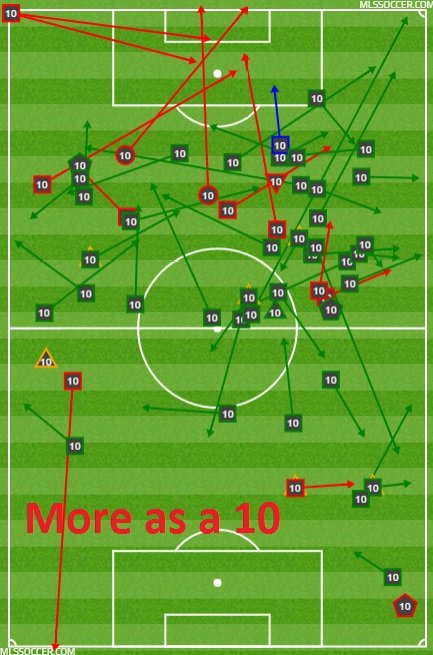 There's not a ton going on in this one, until you locate that blue square. That's the game-winning assist to Keegan Rosenberry.

In that road win, Barnetta had two off-target shots. He went 37/44 on passing and added a tackle and six recoveries. There was one successful dribble, one foul earned, and one foul conceded.

I think the takeaway from this final chart is that Barnetta moved the ball well on the road, got his legs underneath him, and then popped up with a huge play in the second half.

He worked hard, drew fouls, and finished the game with just one shot attempt. The Union need more from this position, not just a guy who is getting himself killed trying to hold the ball.

I think his very first touch was the knock down that almost found Sapong at the far post. Otherwise, he got into the channel a few times, but couldn't pick out a target with that final pass. He finished with one blocked shot and one off-target shot.

It was a tough game for Alberg, but not for lack of trying.

On the own-goal, he makes a great defensive read and just scuffs the tackle. I also felt like he got whistled for a few fouls that seemed questionable.

He had a blocked shot on a set piece routine just before halftime, but finished the game with zero on-target efforts and just couldn't get enough touches.

If anything, I saw positives in his body language throughout the game. Even after the own-goal and the iffy foul calls, he kept his composure and soldiered on.

His second touch of the game almost turned into an assist. That was the knock down that Sapong blasted wide.

Later, he had the curling effort that Johnson did well to push over the bar.

Pontius had two of the Union's three shots on goal and added a pair of key passes.

He really turned it on in the second half and started driving forward from his No. 8 spot. The only issue is that that allows situations like this 4v4 counterattack to develop when he doesn't get back.

He finished 5/7 on tackles with one block, nine interceptions, and ten recoveries.

It's never an issue of defensive mettle or work rate with Creavalle, who doesn't get much help when Barnetta plays deeper.

Creavalle's passing still leaves much to be desired, and there was one play where he left Alvarez wide open on a set piece, but he had a goal-saving recovery in the second half and helped to keep the game in reach for the better part of 71 minutes, when Barnetta was caught upfield looking for the equalizer.

There was a bit of ball-watching on the second goal, when McCarthy makes the original save and de Leeuw is free at the back post to head in the rebound. That's Fabi's assignment.

Otherwise, he got up the flank early and often and provided a consistent outlet in the attacking third. He tried seven crosses, four which found Union players in the box and three that were cut out.

He stuck out a big leg to bat down a Goossens cross early in the game.

Marquez did seem a bit static on the first goal, but he steps correctly to pressure the ball and Polster quickly gets rid of it. I'm not sure what else Marquez can do in that spot.

On the second goal, it's a 4v4 coming back the other way and Chicago gets inside on a nice diagonal in transition.

I really don't think he had that bad of a game.

Early on, he reacted smartly on two plays that allowed him to draw fouls in the box and snuff out Chicago opportunities. In the second half, he had a huge block on Brandon Vincent after a nice attacking movement down the left-hand side.

On the first goal, he does let de Leeuw slip inside a bit, but it's Alberg who knocks the ball into his own net after making the defensive read. Yes, Tribbett needs to move his feet faster, but he can't be the scapegoat for that goal.

On the second goal, he has to step up on the ball at some point, which he does. Maybe he can turn and look for a second runner, but it is what it is.

On the third goal, it's 90 minutes into the game on another transitional opportunity. Most center backs will have trouble on that play while moving backward, 1v1, in open space.

He did alright defensively but couldn't land any of his crosses. His finished 0/6 in that category.

He's not Andre Blake, but most people aren't. He got unlucky on the own-goal, then came up with the save on the second goal, only to watch a late runner knock in the rebound.

McCarthy did well on a couple of quick reactions, including the shanked touch that Rosenberry almost put in the top corner.

Added something to the offense with his penchant for getting on the ball and running at defenders.

The game was pretty much over by the time he came on.

Some 'meh' foul calls, plus a missed handball in the first half. He let Polster get away with two tactical fouls, but only blew the whistle once and kept his cards in his pocket.

No game-changing errors in this game, just typical PRO inconsistency.