With XPN's performance space closed due to COVID-19, the band performed 'Strangers' via a remote video collaboration 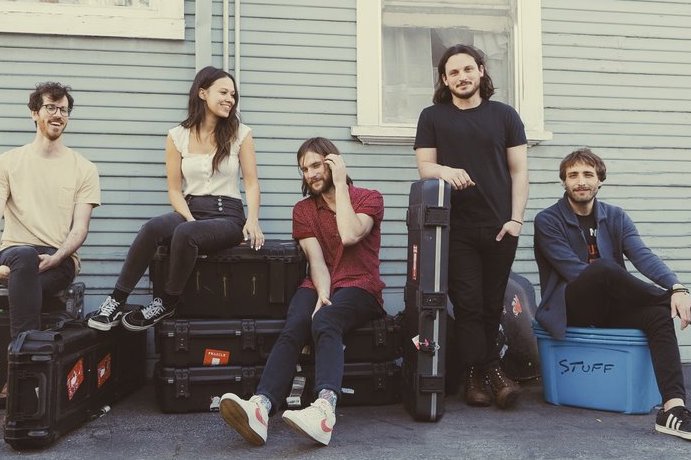 Folk band Mt. Joy, started by two Philly-area natives, performed a song off their 2020 album for World Cafe Live during the coronavirus pandemic. Band members performed 'Strangers' remotely from inside their homes due to social distancing measures.

Like many of us, the stuff Matt Quinn of the band Mt. Joy misses most while staying at home and social distancing during the COVID-19 pandemic are things he'd always taken for granted, like hanging out with friends and watching a game.

Quinn, a guest on XPN's World Cafe Live on Tuesday, reminisced from the Philly apartment where he's quarantining about going "... some place were we can all get together and, like, crack a beer and just be normal and high five, watch a Sixers game and put my arm around my friends when (Joel) Embiid dunks for the win."

A self-described "big Philly sports fan," Quinn continued to say, "These things that are so small, but then when you lose them you realize that they drive your friendship. They drive your happiness for better or worse."

Quinn and bandmate Sam Cooper first met as students at Conestoga High School in Chester Country and discovered their shared love for playing music. But it wasn't until years later that the Main Line natives would reunite in Los Angeles, and found the band "Mt. Joy" named for an area in Valley Forge National Park. Both are staying at places in Philly during the coronavirus crisis, Quinn told XPN.

Mt. Joy's hit "Silver Lining" from the 2018 self-titled debut album ending up reaching No 1. on the Billboard Adult Alternative Chart. Now, the band is back with the sophomore album "Rearrange Us," released earlier this month.

The indie folk group was invited to come out of isolation to perform some of their new songs for World Cafe Live.

Instead of the usual live World Cafe performance, Mt. Joy recorded songs at home in quarantine, and released one song, "Strangers," as a collaborative video. The result is a combination of each band member filming their part of the song remotely.

"It's a fun way to do it," Matt Quinn said on World Cafe Live. "But I think we're all excited to one day be back in the same room together as well."

Due to COVID-19 restrictions, Mt. Joy couldn't go into the radio station to perform. Typically, World Cafe records bands at their University City studio/venue, and then streams the performances for nearly 600,000 listeners each week. The two-hour daily program is one of the most popular public radio shows in the country.

Watch their collaborative virtual performance below:

Mt. Joy actually attempted to stall the release of "Rearrange Us," as it was planned to come out soon after the death of George Floyd in Minneapolis on May 25, which sparked protests nationwide about policing and racial injustice.

In a social media post, the band said they didn't want their songs to be a "distraction from reality," that would've been welcome if the country was just dealing with coronavirus.

However, Mt. Joy said the release could not be stalled and the album launched anyways on June 4.

"Listen to and amplify black voices, learn, protest peacefully, and put your money where your mouth is," Mt.Joy said in a social media post regarding the album's release. "To that end, 100% of album profits from the first week will be donated to Campaign Zero, a nonprofit dedicated to ending police violence."

Despite the timing the release and the band's reluctance to promote it immediately, the record is performing well amid the two converging national crises. As of Tuesday, "Rearrange Us" is the top-selling vinyl record in the country according to Billboard, ahead of Lady Gaga's "Chromatica" and Billie Eilish' "When We Fall Asleep, Where Do We Go?"

Mt. Joy is signed to the record label Dualtone. The Nashville-based label specializes in Americana, indie rock, and folk music, fitting Mt. Joy's sound, which may be familiar to fans of Del Water Gap and Hippo Campus.

The Lumineers are also to the same label. Mt. Joy toured with the popular folk group known for their 2012 self-titled debut album and the single "Ophelia." However, the tour was cut short due to the coronavirus pandemic.

You can listen to Mt. Joy's music on Spotify and other streaming platforms. Listen to the full interview and performance on World Cafe Live below.