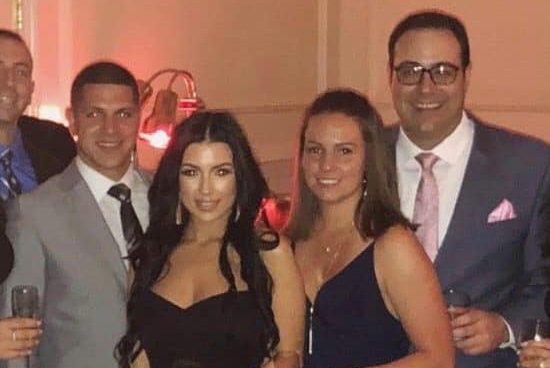 (L-R) Dennis and Nicole Palandro, Kelly Wiseley and Joseph Ferry were driving along Packer Avenue in South Philadelphia when an apparently suicidal man slammed his vehicle into theirs. Nicole was the only survivor in the vehicle.

It was an unimaginable tragedy, the likes of which the Mummers community never before faced.

When an apparently suicidal man slammed his car into another vehicle along the 600 block of Oregon Avenue early in the morning on January 2, two members of the South Philadelphia String Band and a newly engaged fiancé were killed, while one of the victim’s wives was badly injured.

A week later, friends, family members and fellow mourners have faced three funerals, and the driver of the other vehicle – Keith Campbell of Bear, Delaware – is facing three charges of homicide by vehicle.

Left behind are those who want to find a way to find some semblance of goodness in the horror faced by the families of Joseph Ferry, Dennis Palandro, Kelly Wiseley and Palandro’s wife, Nicole, the lone survivor in their vehicle.

Spurred on by initial GoFundMe efforts to help cover funeral expenses, longtime Mummer (best known as the “Golden Buddha”) and restaurateur Angelo Lutz has registered a non-profit organization in New Jersey to have a lasting impact in the wake of tragedy.

“I’ve been a Mummer since 1978 and we’ve never had anything as tragic or horrendous as this. We’ve had deaths, but never anything like this,” said Lutz, who has known Palandro’s father, Denny, for decades and served as a family spokesman in the days after the deaths.

“It was basically the same day as the parade. The parade’s over and then eight or nine hours after, we’re facing deaths in the Mummers community," he continued. “I wanted to do something to memorialize them, so people never forget them.

"The Mummers isn’t just about having a good time and getting drunk, even though that’s the way some people portray it. There’s always been human kindness and a back story involved.”

That’s the spirit with which he hopes the Palandro-Ferry Memorial Foundation proceeds in the future, even after he’s gone from earth.

Founded a day after the collision, the foundation “will provide monetary scholarships and goodwill among the Philadelphia Mummers Community, as well as serve as a reminder of these amazing people. Let us never forget them.”

Lutz – proprietor of The Kitchen Consigliere restaurant in Collingswood, New Jersey – started with a personal donation, and has since seen more than $8,000 in donations come in.

He is also seeking corporate partners to join Maglio Sausage Company, Mary’s Catering and others who’ve signed on to support the effort. He plans to attend next week’s Philadelphia Mummers String Band Association meeting in the hope that “they’ll join me and work together as a team.”

“The goal is to provide monetary scholarships and grants throughout the Mummers community to those in need; if a kid needs an instrument repaired, or learn how to play the sax, music lessons, those kinds of things,” he said on Thursday night. “Now is the time to step up and walk the walk.”

The foundation is centered around memorializing the Mummers who died in the crash, but Lutz said he hopes to speak with Wiseley’s family “when the dust settles” to incorporate her passions into grants that they’ll offer.

“This is going to be forever, like Mummers Against Cancer,” he said. “The foundation’s motto is ‘never forget.’”

The foundation’s Facebook page has more information about its mission, and donations can be sent to The Palandro-Ferry Memorial Foundation, P.O. Box 8696, Collingswood, N.J. 08108-8696.