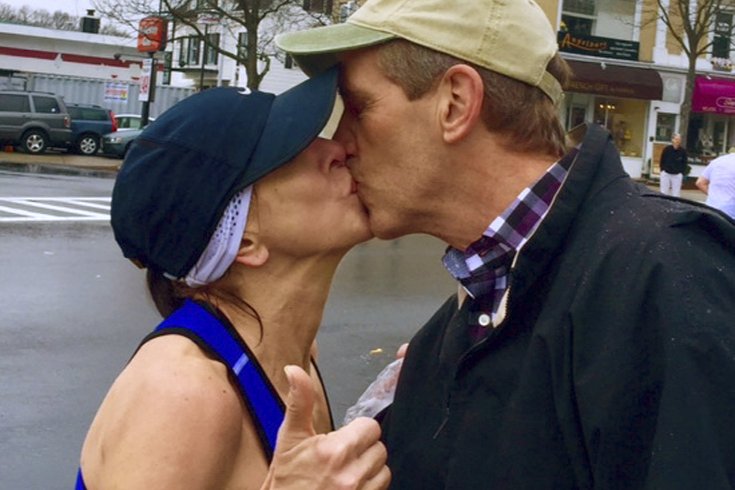 In this April 20, 2015 photo provided by Paige Tatge, her mother, Barbara Tatge, left, kisses an unknown spectator in Wellesley, Mass., as she runs the Boston Marathon.

A simple dare between a mother and daughter has gone viral.

Paige Tatge dared her mother Barbara Tatge to kiss a random man as she passed through Wellesley during the Boston Marathon. The photo proving that Tatge completed the dare with a mystery man has since gained a lot of attention and had her daughter on a mission to find him.

The man's wife, who also ran the race, reached out in a letter to Tatge via The Wellesley Townsman. She has requested that she and her husband remain anonymous.

"When this story aired on the news we were pretty surprised,” the mystery man’s wife wrote. “For me, I’m not mad. Believe me, our friends have gotten a lot of mileage out of this story and I have thoroughly enjoyed watching them give my husband grief! We all thought this story was hilarious because it is just like my husband to do that. It was one of many memorable stories from a great weekend in Boston."

Tatge said initially that she regretted not getting the man’s number after running further along the course and processing the man’s in-the-moment plea for her to call him, which ultimately set off the search to find him.

The mystery man's wife remained lighthearted about the impromptu kiss.

"While this may not be the ending that you had hoped for, that spontaneous, silly moment in Wellesley captured the fun, energy and spirit of the Boston Marathon," the man’s wife wrote in the letter. "I greatly admire your spunk and courage and wish you many happy races in the future. Congratulations on your Boston finish!"

Tatge said she will stick to kissing only single men from now on.

"I’ve been surprised and overwhelmed with all the attention this simple story has gotten and would like it all to go away quietly, I really would," Tatge told the Townsman Sunday. "In all sincerity, I apologize if the media firestorm has caused him any discomfort."

Read more from the Townsman.