NASA's Artemis 1 moon mission to blast off Saturday afternoon; here's how to stream the rocket launch 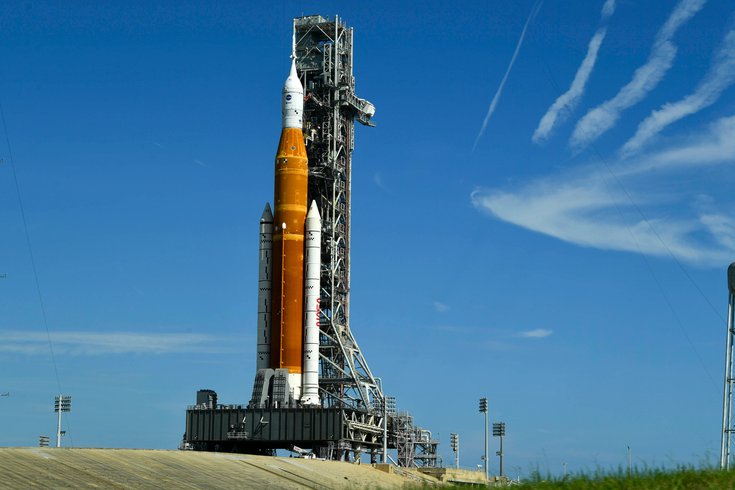 Artemis 1, seen at Kennedy Space Center, will take off on its mission to orbit the moon Saturday afternoon. The crewless mission originally was supposed to launch Monday, but was delayed due to rocket cooling issue sand a hydrogen leak. The launch can be streamed on NASA's YouTube channel.

The rescheduled launch of NASA's Artemis 1 mission – which will pave the way for humans to return to the moon for the first time since 1972 – will take place Saturday afternoon, weather permitting. It can be viewed from a livestream on NASA's Youtube channel.

The launch originally was scheduled for Monday, but a hydrogen leak and engine cooling issues forced NASA to postpone it several days. The two-hour launch hour begins at 2:17 p.m. Saturday.

Here's what you need to know ahead of the historic event.

The Artemis 1 mission is NASA's first integrated test of the Orion spacecraft, Space Launch System rocket and the ground systems at Kennedy Space Center in Florida. The mission intends to propel the Orion spacecraft, which will be carrying three test dummies, into orbit around the moon and bring it back to Earth.

The mission will provide a foundation for future space exploration and demonstrate NASA's commitment to send people to the moon and perhaps beyond. In 2024, the Artemis 2 mission will send a crew to orbit the moon. A lunar landing is slated for 2025 as part of Artemis 3. That mission is expected to include the first woman and first person of color walking on the moon.

As part of Artemis 1, the Orion spacecraft will travel 1.3 million miles over six weeks. It will splashdown in the Pacific Ocean off the coast of San Diego on Oct. 11.

As part of the mission, the Orion spacecraft will launch atop the most powerful rocket in the world and fly farther from Earth than any spacecraft built for human has traveled. It also will stay in space longer than any human spacecraft has done without docking onto a space station. And it will return to Earth faster and hotter than any spaceship has.

What is the forecast for the launch?

Meteorologists predict a 60% chance of favorable weather conditions during the launch window, which begins at 2:17 p.m. Saturday. Rain showers are expected, but predicted to be sporadic.

How can I watch the launch?

NASA is providing coverage during prelaunch, launch and post-launch on NASA Television, the NASA app and the NASA website.

NASA TV coverage will begin with commentary on tanking operations at 5:45 a.m. Saturday, followed by launch coverage beginning at 12:15 p.m. A livestream is available to watch on the agency's Youtube channel.

The latest news on the launch will be posted to NASA's Artemis blog.

The last time a rocket this powerful took off from Kennedy Space Center was in 1973, when the Saturn V moon rocket carried Skylab into orbit, ending the Apollo era.