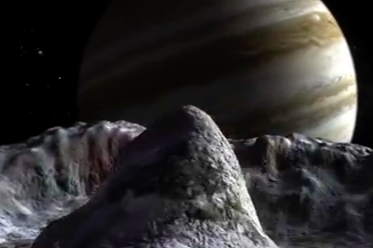 View of Jupiter from moon Europa, which is smaller than Earth's moon but larger than Pluto.

In 2015, NASA broke major ground by revealing the existence of seasonal liquid flows on Mars, but the American space agency now has its sights set on the next planet out from the sun, Jupiter, whose moon Europa is believed to be the most likely place in our solar system to support alien life.

After years of investigation to determine the most suitable spacecraft to conduct a series of 45 flybys, NASA now says it is preparing for a $2 billion mission that will aim to discover whether Europa is a habitable moon, according to Business Insider.

The Europa Multi-Flyby Mission, expected to launch in the 2020's, will explore whether the moon's giant subterranean ocean is amenable to life while also collecting invaluable data on the surface.

"Anything else we can add to the flyby mission, whether it's a lander or any kind of probe, will make it even more fantastic but even without those things this is going to be a mission that's one of the best that NASA's ever done in terms of the science return and the excitement it generates," said Curt Niebur, lead program scientist for NASA's New Frontiers Program.

Scientists believe Europa's ocean may contain more water than all of Earth's oceans combined, but it remains to be seen whether the pH level of the water is too acidic to support life, according to Niebur. Despite previous Europa orbit missions by NASA's Galileo spacecraft, the multi-flyby mission will map the moon's surface at resolutions up to ten times better.

While Niebur expressed concerns about the agency's ability successfully place a lander on Europa's surface, U.S. Representative John Culberson (R-Texas) is pushing hard to make a lander a legal requirement of the mission. Culberson secured $175 million in funding for NASA to design a lander for the mission in hopes the agency can reach a solution before it's time to launch.

Learn more about Europa's ocean and the search for life in the video below from the NASA Jet Propulsion Laboratory.