NBA trade rumors: Kevin Durant has requested a trade – can the Sixers get in the mix? 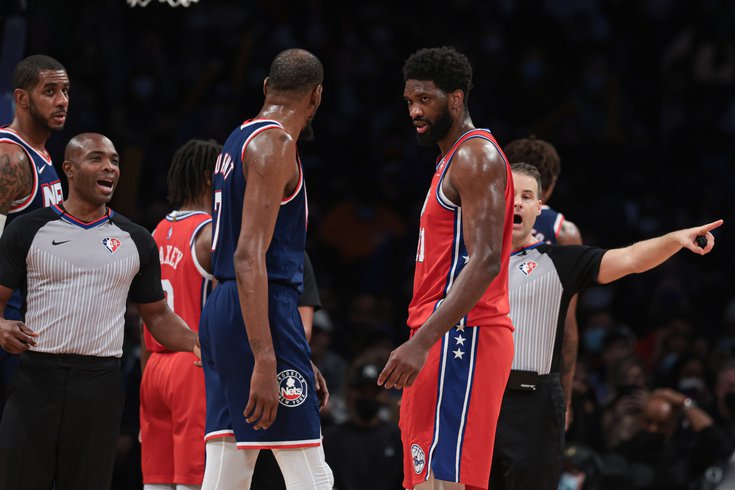 Kevin Durant and Joel Embiid face off at Barclays Center.

Just a couple of days ago, Kyrie Irving opted in for another year with the Brooklyn Nets, seemingly pushing away rumors that he and Kevin Durant would both leave the franchise this offseason. Unfortunately for the Nets, any victory on that front appears to be short-lived, with every insider in the business reporting Thursday that Kevin Durant has requested a trade out of Brooklyn.

The most important details, as usual, come from Adrian Wojnarowski over at ESPN.

Phoenix and Miami are among two of the teams that Kevin Durant has on his wish list, sources tell ESPN, but the Nets plan to move Durant where they can get the best possible deal. With four years on his contract, there's no shortage of teams willing to unload assets for Durant.

Kevin Durant and Kyrie Irving had no contact with the franchise after Irving opted into his deal on Monday, and a sense of inevitability existed that Durant would eventually ask for a trade, sources tell ESPN. It happened today.

If you were asking me to handicap this race, Phoenix feels like a pretty strong favorite to land Durant in a deal that could work out for both sides. DeAndre Ayton is a young, ascending player who appears to be on the outs there anyway, and the Suns are in control of all of their future draft capital at the moment, draft capital that could be more valuable in the short-to-medium term than you might think. With Chris Paul in the final stages of his career, Durant in his mid-30s, and Devin Booker a free agent in two years, the possibility exists that they could fall off of a cliff quickly, even if the Suns can put together a superteam in the short-term.

However, every team in the league is going to be asking themselves the same question: can we put together an offer that puts Kevin Durant on our roster? No matter who you are and who is on your roster, it is a question worth asking, not just because he is an all-time great player, but because you would acquire him knowing you have him under contract for the next four years.

Durant is one of the single greatest players to ever touch a basketball. With Durant under contract into his late 30s, you could conceivably acquire one of the game's all-time great scorers with plenty of points left to drop on opposing defenders. He is borderline unguardable most of the time, his length so preposterous that teams can only get near his airspace as he rises up to can jumpers. And as the years have gone on, he has gotten better and better at harnessing the value of his scoring/shooting ability from all over the floor and using it to impact the game all over the floor. He was a terrific, versatile defender for the Warriors at their zenith, averaged more assists last season than in any year of his career, and he is insanely efficient by normal standards and based on the attention teams shade his way. He is inevitable, so to speak. This is a monumental moment in league history.

That being the case, the view from Philadelphia's end of things for two primary reasons.

I am much less concerned about the second point than the first. Durant and Harden traded some icy comments back and forth through the media following Harden's departure from the team, and while you'd have to figure out just how salvageable the relationship is, Harden's decision to pout and push his way out of Brooklyn looks much more justified in hindsight. As joined at the hip as Irving and Durant were when they started their partnership in Brooklyn, that connection has clearly deteriorated enough that the two are marching to their own drum sets. In Harden, Durant could find a peer more sympathetic to issues with Irving than perhaps any other player in the league. The two have known each other for a long time, and while reuniting this quickly might not be a first choice, it's also not totally out of the question.

The first point, though, is a real hurdle. In the process of putting together what they have, the Sixers have relinquished control of their first-round picks for quite a while. The Sixers do not have control of their 2023, 2025, or 2027 first-round picks, and as a result of the Stepien Rule, the Sixers cannot trade their 2024, 2026, and 2028 first-round picks, at least for the time being. They are lighter on draft capital than most, if not all of the potential suitors for Durant that you could think of, and when a team is in the process of finding a deal to trade away an all-time great prepared to contend now, they are certainly going to want some of the future upside to come through draft pick control.

Philadelphia's case to elbow into the conversation essentially rests on one player: Tyrese Maxey. Viewed as borderline untouchable by the organization, Maxey is viewed as one of Philadelphia's core players moving forward and not even under consideration for a move in the vast majority of scenarios. But this is the sort of unique scenario that warrants that consideration, an opportunity that would land you one of the best possible win-now pieces you could get your hands on as an organization. And I will take it a step further — through a combination of his age, production, work ethic, production, and current contract, Maxey is one of the single most valuable trade assets in the league at present. He is not a perfect player or prospect, certainly, but he is a big chip to put on the table if you were inclined to do so.

(The difference between Maxey and, well, some other players who will go unnamed, is that I imagine he would simply be flattered to think he might lead a trade offer for a first-ballot Hall of Famer. No sulking or pouting expected from that kid, even in a pure hypothetical.)

From there, any Sixers package starting with Maxey would have to feature Tobias Harris in a prominent capacity just to make the money line up. If the Sixers are going to boost the value of a package in any way, it would have to be through including whichever younger players with theoretical upside they could put toss in. Matisse Thybulle is the obvious name that jumps out, with second-year player Jaden Springer a final garnish in that group.

Looking at it from 1000 feet up, that looks like a package that is going to fall pretty short of requirements. Durant is going to be able to influence his final destination the way any star with his status could, but even if he had raised his hand and said, "Philadelphia is where I want to be," there's simply too much of an asset deficit to make up for. Other teams can effectively offer control of their draft rights for the foreseeable future and young talent on top of that. And the Nets know better than any franchise in the league just how impactful draft control is in star trades — they now seem to be on the wrong end of that equation in two recent mega-deals, first with the Kevin Garnett/Paul Pierce Celtics deal and now with the Harden/Rockets deal, their future in serious doubt moving forward.

Suffice it to say I would put the Sixers low on the list of potential suitors for Durant. But, as you learn when covering this league full-time, calls will be made, and you never say never.