But it still remains more likely that a deal involving Simmons and a player of that caliber happens in the summer, sources say. 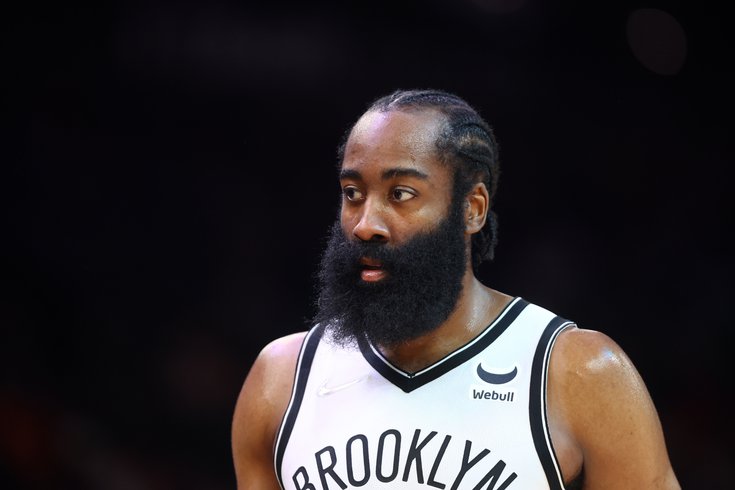 The end of the Ben Simmons saga doesn't seem likely between now and February 10th, but a major player is now officially in the marketplace, with the Nets signaling that they'd be willing to move James Harden on Friday, according to Shams Charania of The Athletic.

That's the big news, but the important part for Philadelphia might just be contained within these paragraphs:

With the NBA trade deadline just days away on Feb. 10, the 76ers are expected to pursue Harden in the coming days and the Nets are believed to be open to discussing a deal, sources with knowledge of the situation tell The Athletic. There’s expectation that both the 76ers and Nets will engage in dialogue on a deal around Simmons for Harden this week, multiple sources say, with Philadelphia holding a chest of role players in Seth Curry, Tyrese Maxey and Matisse Thybulle that could sweeten a potential package. Still, there’s no urgency for Nets officials, who have had the steadfast belief that the current core, as is, has the means necessary for a championship. However, it’s believed that an opening exists should an offer elevate the team and make the roster more well-rounded as the franchise pursues a championship.

Along with the potential of improving the roster depth, the Nets appear in need of change in what is a critical year in Kevin Durant’s prime, with a player option looming for Kyrie Irving in the offseason and with the organization’s championship expectations. When the Nets acquired Harden in a blockbuster trade in January 2021, the Big 3 he formed with Durant and Irving promised to be indestructible, arguably the most lethal offensive combination ever assembled. In the 16 games all three have played together, Brooklyn is 13-3. Their availability together has been a major concern, and perhaps could be a tremendous what-if factor in the grand scheme.

But beyond availability, sources say there have been growing concerns over Harden’s playing style — one of dominant ball-handling and his own pace from his MVP and All-NBA days in Houston — that contrasts with the free-flowing, organic approach from his two co-stars. Nets coach Steve Nash has met with his team’s stars over finding the balance and most beneficial styles, and although there have been bright spots, too often the team has reverted to a more dry offense at the end of games, especially against the league’s elite teams. In addition, the Nets’ game plans tend to shift depending on when Harden is on and off the floor, meaning a different play style at certain points.  [The Athletic]

This specific reporting is not lost on members of the Sixers' organization, who believe the beginning of this report is contradicted by the end. The idea that they should have to give up multiple valuable trade chips for a disgruntled player who could outright walk away from Brooklyn in the summer has already been mocked internally. If Harden is in danger of actively sabotaging what the Nets want to build, as Charania reports here, the Sixers don't believe they should have to give up more than a multi-time All-Star in Simmons to get a deal done before February 10th.

"Brooklyn would love to get a 25-year old, multi-time All-Star who is under contract for multiple years in exchange for a guy who is unhappy and not under contract long term," one source said.

It is still more likely, sources familiar with the situation say, that the Sixers complete a deal for Harden or a player of Harden's caliber in the summer, rather than in the next six days. But the Sixers are, as they have been for months now, prepared to move quickly if they feel the right opportunity is on the table. As we reported earlier Friday, no player on the roster (save for Joel Embiid) is untouchable in trade talks, depending on the player(s) on offer. And the team has insisted for a while now that this is not a Harden-or-bust push, a claim they feel has been made for dubious reasons elsewhere.

MORE: Sources: Ben Simmons 'increasingly likely' to be with Sixers after trade deadline

If Harden is available, the on-court benefits are obvious if he is bought in. The 2017-18 MVP of the league, Harden has finished in the top three for the league's top individual honor five different times, including four straight years from 2016-2020. He did so playing as essentially the ideal "Moreyball" player, living beyond the three-point line, at the rim, and at the charity stripe, the latter to an almost comical degree sometimes. Prior to arriving in Brooklyn, Harden was basically an elite offense by himself in Houston, an electric scorer who is also one of the game's most prolific playmakers. The latter portion has become more central to who he is the last two seasons, with Harden serving as a point guard and passer more often in an offense featuring Kevin Durant and (sometimes) Kyrie Irving.

That combination is basically the dream for Philadelphia in the backcourt. Being able to put Harden in pick-and-rolls with Embiid puts every defense in a no-win scenario, with either player capable of punishing the defense for a lapse in concentration or lack of respect for their skill set. Over the last two years, Embiid has done the work to make his own life easier on offense, taking his conditioning and mental approach to the game seriously enough to exploit every early offense opportunity possible. But there's still a sense that he could benefit from having an elite shot creator next to him, someone who can habitually get him easy buckets.

On the other hand, Harden's ability to last and play at a high level into his late 30s is worth a great deal of concern with Harden heading toward another megadeal when he hits free agency, something that has to be grappled with whether the price tag in a trade is fair or not. And with stylistic concerns in Brooklyn, where the perimeter trio is able to flow a little more easily in and out of styles than a team built around a post-up big, there are glaring questions about whether Harden would be any happier in Philly than he is with Brooklyn, his relationships with Daryl Morey and Co. notwithstanding.

If it's not clear at this point, posturing is going to hit record highs over the next week. Take this as you will — as of Friday evening, team sources told PhillyVoice there has been no significant conversation between the Nets and Sixers regarding Harden, with Philadelphia viewing this latest report as a signal that they're merely open for business. It's a big opportunity, if true, but that doesn't mean anything is getting done between now and next Thursday. Stay tuned.