Plus, a Friday afternoon Harden report that could alter the deadline and the latest on Damian Lillard. 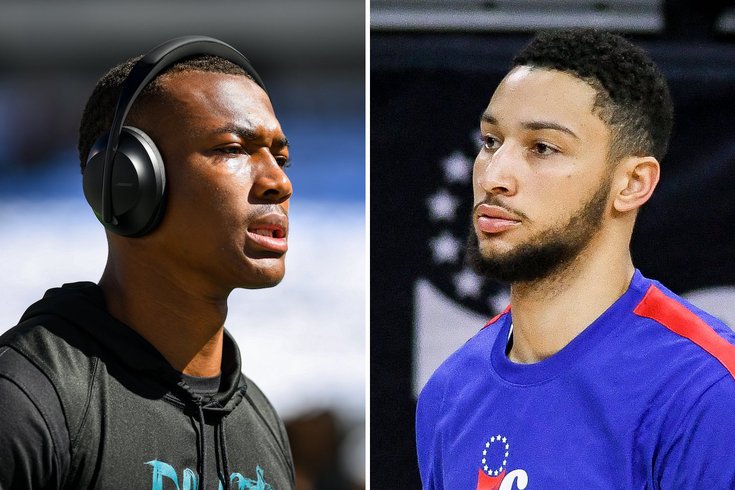 According to Shams Charania of The Athletic, the Sixers may actually have a shot at landing James Harden ... before next week's trade deadline. That's right, the Nets now appear more willing than before to deal the All-Star before possibly losing him in free agency this offseason.

The Philadelphia 76ers and president of basketball operations Daryl Morey had been plotting to wait for the offseason to chase James Harden as a free agent and save Ben Simmons for a potential deal, but he may not have to wait that long after all.

With the NBA trade deadline just days away on Feb. 10, the 76ers are expected to pursue Harden in the coming days and the Nets are believed to be open to discussing a deal, sources with knowledge of the situation tell The Athletic. There’s expectation that both the 76ers and Nets will engage in dialogue on a deal around Simmons for Harden this week, multiple sources say, with Philadelphia holding a chest of role players in Seth Curry, Tyrese Maxey and Matisse Thybulle that could sweeten a potential package. Still, there’s no urgency for Nets officials, who have had the steadfast belief that the current core, as is, has the means necessary for a championship. However, it’s believed that an opening exists should an offer elevate the team and make the roster more well-rounded as the franchise pursues a championship.  [theathletic.com]

Earlier on Friday, our own Kyle Neubeck reported that it was looking more and more likely that Simmons would remain in Philadelphia beyond the deadline. Previously, it seemed that the Nets would only be willing to trade Harden after the season — they are, after all, a contender and the current favorite to win the East.

You can read a much more detailed report from Kyle right here.

As far as Sixers trade rumors go, this one really isn't much. We'll admit that. But the NBA trade deadline can be a stressful time, and we thought we'd lighten the mood here by showing you that DeVonta Smith, well, he knows ball.

Danny Green on his SiriusXM show: "Do you think we should trade (Ben Simmons)?" DeVonta Smith: "As a fan of basketball, if it was me, I would trade him."

That's right, the Eagles rookie wide receiver and 2021 Heisman winner, is just like you, Sixers fans, in believing that Daryl Morey and Co. need to ship out disgruntled guard Ben Simmons. Unlike Morey, however, it sounds like Smith would've already gotten a deal done — and who knows what the Slim Reaper might be able to get in return.

One player it's seems increasingly unlikely that the Sixers will land is Blazers guard Damian Lillard. Once thought to be the apple of Morey's eye, Lillard has remained steadfast that he wants to stay in Portland. And with the James Harden rumors picking up steam — and we all know he's Morey's one and only — perhaps Morey's attention has shifted elsewhere.

But even if the Sixers were still in on Lillard, and even if he were to soften his stance on staying in Portland, it appears Philly wouldn't have much of a chance of luring the veteran guard to the East Coast. According to Chad Ford on his latest podcast, if Lillard does move, he'd prefer to stay out west.

Of course, this isn't free agency but a trade, and in Ben Simmons the Sixers have arguably the biggest piece to return to Portland — and if it's draft picks they want, they could bring in a third team to get the Blazers the prize they seek. But given Lillard's standing in the organization, it's expected that he'd approve of any trade before it's made, especially with him still being under contract for the next two years (with a player option in Year 3).

So if not Lillard, then who? Will Morey try for Bradley Beal, who like Lillard reportedly wanted to stay put, but now is starting to grow restless? Will he wait for the summer to try for James Harden, possibly wasting the best season of Joel Embiid's career? Or will he pull off something that none of us are expecting?

The NBA trade deadline is now less than a week away, and we'll keep you covered right here with live updates and analysis of every rumor that pertains to the Sixers. And if it's a big one, we'll top off this post with the newest information. Let's go...