Well, there goes the impossible dream of four consecutive Rookie of the Year awards in Philadelphia. As expected, Andrew Wiggins of the Minnesota Timberwolves took home the honor for the 2014-15 season. The Canadian swingman received a whopping 110 first-place votes, which was good enough to win in a landslide. Bearded Chicago Bulls sharpshooter Nikola Mirotic was the clear second-place choice, and most importantly to all of us, Sixers big man Nerlens Noel finished in third. Here's a breakdown of the voting from the Timberwolves' official announcement: 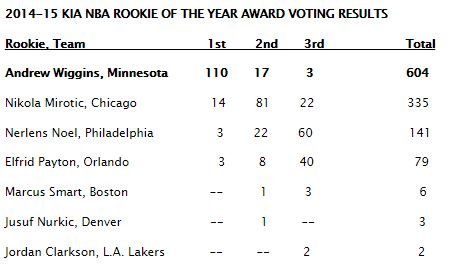 Again, the results are to be expected. The honor almost always goes to the player that scored the most points, like Michael Carter-Williams last year. Noel put up an interesting case with his unique defense, but it was only enough to secure one first-place vote outside of the Philadelphia market from ABC/ESPN/Fordham University's Mike Breen. BANG! I don't recall, but maybe Noel's March destruction of the Knicks stuck in his mind? Breen calls games with Clyde Frazier for MSG. Bill Simmons, a frequent target of Sixers fans, voted Noel second. In case you are interested, I cast my fake ballot for Mirotic about a month ago with Noel right behind him.

To close, I'll offer a paragraph from that post, a reminder that while this award can be fun, it really doesn't matter. Look at Carter-Williams, for example:

Point is, Nerlens Noel is still going to be Nerlens Noel regardless of whether he receives that little clear trophy or not. The same goes for Wiggins, Nikola Mirotic, and Elfrid Payton. And most importantly, Sam Hinkie’s rebuilding plan (aka “THE PLAN”) won’t be further validated if the skinny 6-foot-10 shot-blocker wins Rookie of the Year. We’ll have to wait and see if Noel is turning away drivers at the rim in the Eastern Conference Finals a few years from now to know that for sure.