Making a difference with drones 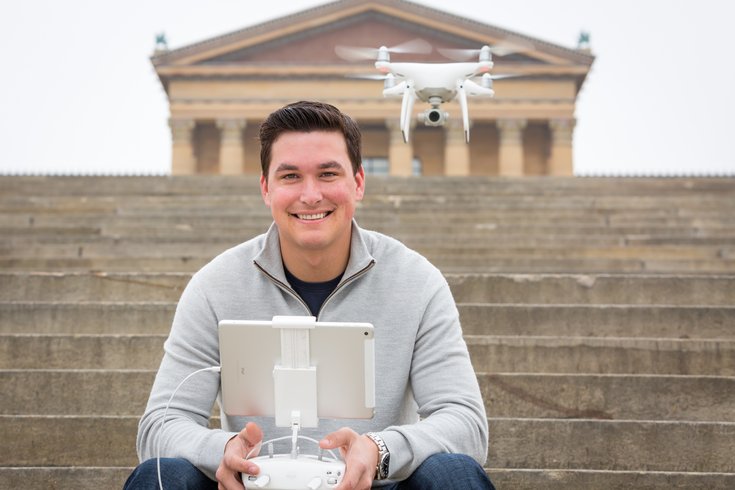 Brett Tiagwad, a drone operator with Elevated Angles, poses with his DJI Phantom 4 Pro drone at the Philadelphia Museum of Art.

There's a new drone business in town, and its vision is both creative and kind.

Brett Tiagwad recently launched Elevated Angles LLC, wherein he uses a drone to take aerial photographs on behalf of various clients in the Greater Philadelphia area. Tiagwad's story is different, because his success with drones was propelled by two life-altering milestones – the untimely death of his mother and the subsequent and swift turn to the road to recovery from substance abuse.

A graduate of St. Joe’s Prep and St. Joseph’s University more recently, Tiagwad had no background in photography of any kind, but he got seriously into drones around two and a half years ago – the launch pad for this endeavor being the death of his mother – whose middle name was Joy. He has since named his favorite drone, Joy. He takes it almost everywhere with him.

“I instantly fell in love with it, really seeing the view. Unless you’re in an airplane, you can’t get those views,” he said.

“The more that I take the drone, the more pictures I take. I take it on vacation, so I figured, why not start a company?” 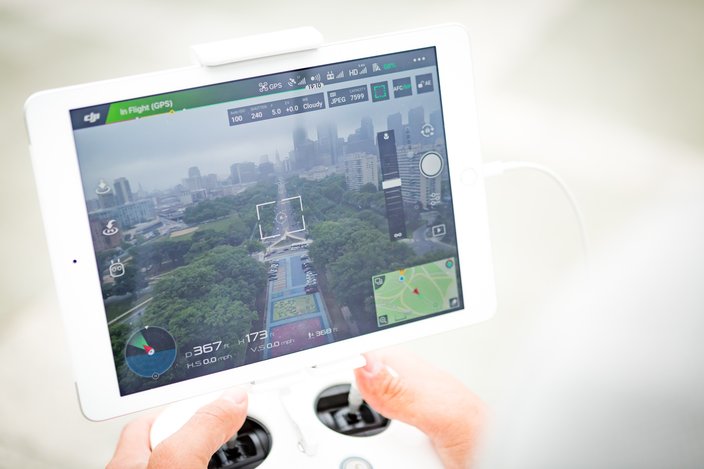 An iPad connected to the controller of Brett Tiagwad's drone showing the view of the camera as he flies it over the Eakins Oval.

His first drone was a DJI Mavic Pro and he recently purchased a second one, also made by DJI, called the Phantom 4 Pro. Tiagwad flies the drone via a remote control; the law requires drone operators to be within sight of the drone while flying it. The law also requires a Part 107 License issued by the FAA, which required him to pass an aeronautical knowledge test at an FAA location. He is limited to using it in certain areas, unless he receives a waiver.

Tiagwad’s new interest in drones coincided with another big change in his life, also two and a half years ago: He got sober and entered into a recovery program. The drone hobby, he said, not only helped him fill the time, but helped him refocus his concentration in a new, healthier direction.

“I found this and it really helped me,” he said.

“When you’re newly in recovery, it’s like, what are you looking to do? It’s tough to keep your mind occupied and keep it off of certain things, and I’ve found getting this hobby, it’s almost like a therapy for me,” he said.

“I really found that this filled my gap.”

Helping out others, in a similar way, is one of Tiagwad’s ultimate goals for the company.

“Once I’m in the positive, making money and revenue, I want to give back 5-to-10 percent to care and treatment centers,” he said.

“[I want to] develop a network of pilots who are early in recovery – try to give that guy who’s new into recovery a job…That will provide some type of therapy for that person in recovery.” 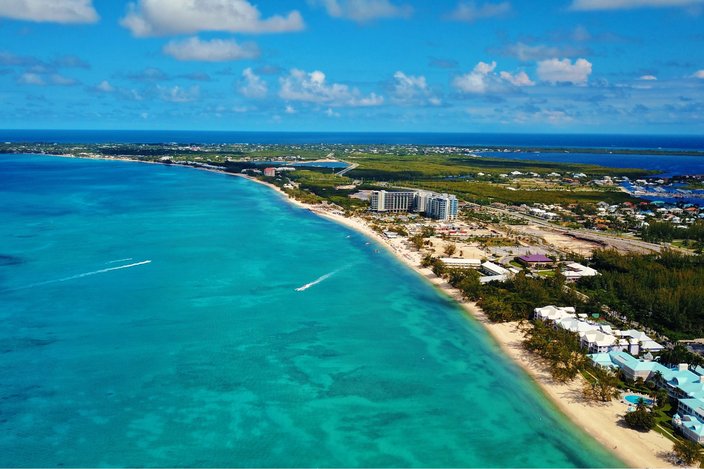 A photo taken by Brett Tiagwad of Elevated Angles LLC.

Tiagwad’s clients include Conner Strong & Buckelew, where he works in his day job as an employee benefits specialist, real estate and construction firms in Philadelphia, as well as an A/V business at the Jersey Shore. Tiagwad uses his drone to photograph homes and other places, and also photographs private events.

He sees potential in lots of other industries.

“I feel like insurance is going to be a big industry for drones,” he said.

“That’s happening in Florida already, where these drone companies are partnering with insurance carriers.”

Earlier this spring, Tiagwad used his drone for another new, much more personal purpose: To record his own marriage proposal.

It was somewhat nerve-racking for him, he said, especially after his smaller drone crashed into a tree during his practice run. But when he proposed to his fiancée, Alyssa, outside the Water Works adjacent the Philadelphia Museum of Art in April, the drone captured the moment – and she said, "yes."

What made the proposal even more special for the couple, is that Joy was watching over them (in two ways, really.) Alyssa now wears Tiagwad's mother's engagement ring, and Joy, from up above, was there to witness it all.

“After she passed away, I was flying my drone a decent amount of the time and it made me feel like she was looking over me. It still feels like she’s with me every time I take flight," said Tiagwad.

He said they’re still in the early planning stages, and so he isn’t sure if there will be any drone photography or videography of the wedding. He may hire someone to do it, since he doesn’t want to have to worry about the drone on the big day.

As for Tiagwad's family, he says he they have been nothing but supportive of his recovery and recent business endeavor.

"I am thrilled with Brett's progress in his recovery," said Michael Tiagwad, Brett Tiagwad's father.

"He has received great help, guidance and resources from professionals, but he deserves a lot of credit for his strong commitment to turn his life around. Brett is convinced that a solid support system and fulfilling activities are key to an effective, long-term recovery. Without all those things working in concert, I am sure Brett could have easily relapsed after his mother's unexpected passing."

However beating the odds, Tiagwad decided to dedicate himself even more to his recovery after his mother's passing, immersing himself further into drone operations, and most importantly, pledged to pay it forward.

Michael Tiagwad added: "I am very proud of all Brett is doing for himself as well as others who are battling addiction."

So, what are Tiagwad’s ultimate goals?

“[I’m] just trying to eventually create a [successful] company, and help people in need with addiction, and hopefully, provide services that costs less, and gets more things done for different types of companies.”