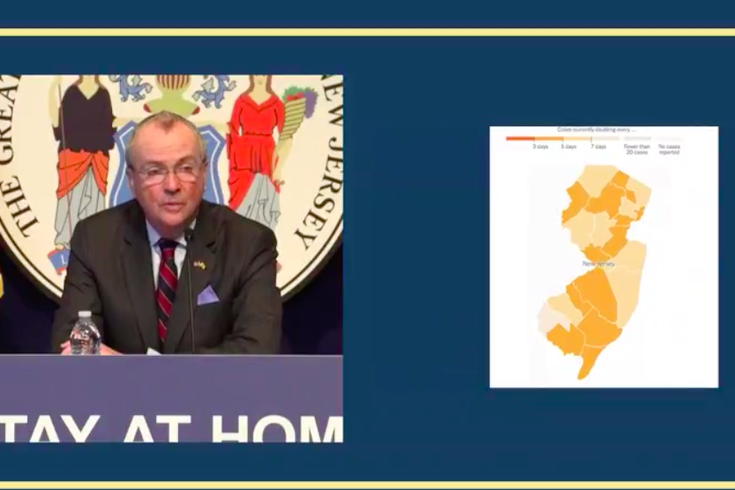 New Jersey is showing more evidence that the state is beginning to flatten the curve in its fight against the coronavirus, Gov. Phil Murphy says.

Coronavirus cases are doubling less frequently throughout New Jersey, providing a glimmer of hope after weeks of increased restrictions and mounting death tolls.

No county has coronavirus cases doubling in three days or less. In eight counties, they're taking at least a week to double. As of Saturday, only Monmouth County could say that.

Murphy credited the state's social distancing guidelines for beginning to flatten the curve of infections. The state has been under a stay-at-home order since March 21. Gatherings are banned. Only essential businesses remain open. Hundreds of thousands of people are out of work.

“There is light here," Murphy said. But he urged residents to continue to take precautions, saying there is no time for selfishness.

“This is real progress,” Murphy said. “Are we spiking footballs? No way. We’re not near the end zone. [The number of cases] is still going up. The curve on the line looks like it’s beginning to flatten of positive cases. But we’re still having more positive cases.

"We’ve gotta not only continue to flatten the curve, we’ve gotta get to a plateau, and then begin to go down as fast as we can on the other side, and we can’t do that alone.”

Look at this map: Social distancing is slowing the rate in which the numbers are doubling.

We need you to stay home whenever possible.

This isn’t about you, or me. It’s about all nine million of us.

New Jersey has 51,027 confirmed coronavirus cases, including 1,700 deaths due to COVID-19, as of Thursday afternoon. Only New York has more.

The majority of cases have been concentrated in North Jersey, but South Jersey has 2,740 cases, including 65 deaths.

The first sign that New Jersey's curve may be flattening came earlier this week. On Monday, Murphy noted the state's week-over-week infection rate had dropped from 24% to 12%

Still, daily cases aren't projected to peak for at least 10 days – and could be as far off as May 11 if residents ease up on social distancing, Murphy said. Total cases could range from 86,000 to 509,000 by the end of the pandemic. Murphy described this vast difference as a "life or death" situation.

Hospitalizations could peak as early as this Friday. But it could be delayed until late April if residents begin ignoring social distance guidelines, a scenario Murphy called "literally disastrous" for the health care system. Total COVID-19 hospitalizations are projected to fall anywhere between 9,000 and 36,000.

Murphy doubles down on parks ban

Murphy drew some criticism for closing state and county parks on Tuesday. He defended that decision Thursday, saying it was based on the observations of state park police.

They reported seeing "an enormous amount of gatherings in close proximity of individuals," Murphy said. They also observed an “uncomfortably high number” of cars with out-of-state license plates.

“From moment one beginning in January, we have made every decision based on fact, science and data,” Murphy said. “We didn’t just wake up on a whim and decide to close state and county parks. We did this because of congregations.”

Keeping parks open also places police and other first responders at risk, because they have to break up the gatherings.

Murphy also said that keeping state and county parks open put police and other first responders in harm’s way when having to break up gatherings.

“We didn’t take this lightly," Murphy said. "We did it based on the facts as we saw them.”

Murphy also rejected the notion that parks in rural parts of the state should remain open, saying that “the entire rest of the state will be on your doorstep in your park.” He said he realized the shutdown could increase the number of people who walk or jog along the streets.

He advised residents to keep six feet apart while exercising and to wear a mask.

“Again, I say this not to be a jerk, not to be argumentative," Murphy said. "We did this based on the facts, and we will continue to keep this posture until we are through this."