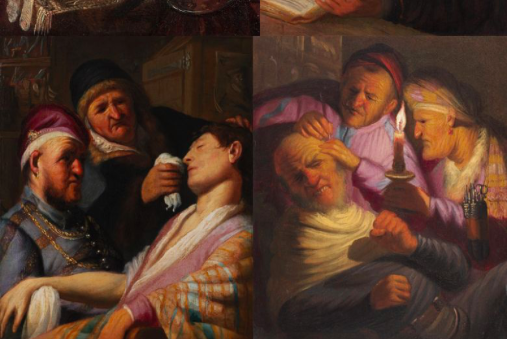 The Senses is a series of five oil paintings by Dutch master Rembrandt in the early 17th century. The whereabouts and content of the fifth painting, "Allegory of Taste," remains unknown.

That's the lesson learned by one North Jersey family who spent generations sitting on a missing oil painting by the Dutch master Rembrandt. They expected to get about $800 for it at most in an auction in 2015. They were stunned when they wound up with $1.1 million, according to a new segment in the "Strange Inheritance" series from Fox Business.

Three brothers from Teaneck — Ned, Roger and Steven Landau — had seen the painting pass first from their grandmother and then to their mother, who died in 2010. Most of her stuff was sold in a garage sale, but Ned thought the creepy painting might be worth enough not to just give it away.

The painting dates to the mid-1620s when Rembrandt, then a teenager, completed a series of allegorical works on the five senses. The Landau's painting, titled "Unconscious Patient (Allegory of Smell)," depicts two men attempting to revive a woman with smelling salts. It's one of four known parts of Rembrandt's series; the fifth, "Allegory of Taste," has not been recovered.

Ned couldn't understand why his mother would ever have had such an unsettling image hanging in the family dining room. Ever since her death, it had been sitting under a ping-pong table in Roger's basement.

The brothers approached an appraiser, John Nye, and got an estimate of a few hundred dollars. They asked Nye & Company to handle the sale of all of their mother's items at an auction in 2015.

Bidding started at $250 and kept ticking up until a phone bidder from France raised it to $5,000. Another caller from Germany got into a war with the French bidder, bringing the total up to $450,000 before the Frenchman clinched the deal at $1.1 million.

The buyer said he'd spent his entire professional career in search of the painting. The Landaus believe their grandfather obtained it at an estate auction from an unwitting dealer before the Great Depression.

"Allegory of Taste" is the only painting in the series known to be signed by the master, with the monogram RHF ("Rembrandt Harmenszoon fecit," meaning "Rembrandt, son of Harmen, made this") The monogram is in a drawing of a man wearing a tabard and fur hat attached to the wooden cupboard at the upper right of the painting.