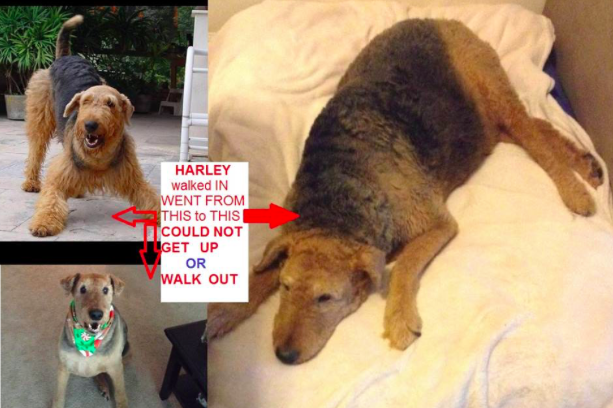 Harley pictured before and after visit to Crosswicks Clippers in Bordentown, New Jersey.

The owner of a Burlington County pet grooming salon has been acquitted of all charges in the mysterious death of a dog following an appointment last February at the Bordentown business.

Sarah Brucolleri, the owner/operator of Crosswicks Clippers, said she endured nearly a year of cyberbullying after she was charged by the Burlington County SPCA in the death of Harley, a 10-year-old Airedale who left the salon unable to walk and in poor health.

"Harley walked into the Bordentown business on his own but was unable to stand up or move without assistance to leave the business after his grooming appointment due to something that occurred while he was in the care of Crosswicks Clippers," the SPCA said in a Facebook post announcing the ruling.

Bruccoleri, who had been charged with causing the death or serious injury of an animal and failing to provide necessary care, told Metro Philly that she wants her name to be fully cleared. The judge in the case said there was insufficient testimony to obtain a conviction.

"I want to reach every single newspaper and media that had contacted us and published it as if it were true," Brucolleri said. "It was not true."

After the grooming appointment on Feb. 21, 2015, Harley could no longer walk or control his bodily functions. Within three months, after attempts to rehabilitate him, Harley's owners eventually had to have him euthanized.

Brucoleri's lawyer, Justin Loughry, referenced Harley's medical history and age as likely factors that led to the dog's natural decline in health. He argued there was no evidence of a specific injury that occurred at Crosswicks Clippers.

The Burlington County SPCA said that though they are disappointed with the outcome, they accept it. They still believe, however, that something must have happened at the salon.

"Not only in the opinion of the SPCA, but also expert testimony, the likelihood of Harley suffering such a catastrophic injury on that particular day at the exact time he laid down or was lying on the floor is so remote as to be almost impossible," the SPCA said in its statement. "However, there were health issues with the dog and the possibility that those health issues may have contributed to his condition could not and can not be ignored."