Words of wisdom from the New Jersey State Police? Cool it.

Authorities delivered the life lesson in a Facebook post while announcing the arrest of a Virginia man who was charged with weapons offenses after he was pulled over in connection with a road rage incident while driving the New Jersey Turnpike.

Perhaps our most notable attribute is our unwavering certainty that we are the best drivers in the world. Like an animal’s instinct to stand minutes after birth, so too is our natural instinct to navigate Jersey’s toll roads and interstates with the skill and agility of a professional race car driver. But we’re all human. We all make mistakes, and there is no evidence that we are better or worse drivers than anyone else.

So here’s the crux of our tale: We’ve all made mistakes while driving. What we need to do is avoid getting so mad at others that we let them know either verbally or by using some type of sign language to relay our displeasure.

Brett Landes, 42, of Locust Grove, Virginia, allegedly got into a road rage incident while heading southbound on the New Jersey Turnpike in Westampton Township around 11 p.m. on Jan. 19. 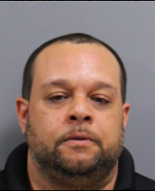 Landes allegedly pulled up next to another driver and waved a gun. The other driver was able to get the license plate number for the suspect's Mercedes-Benz and provided the info to police.

Landes is in Burlington County jail on a no-bail warrant, police said.

Authorities called it a "cautionary tale."

"Don’t be the one staring down the barrel of a gun (not saying that this happened here), or the one going to jail because you made a rash decision in anger," authorities wrote. "We’re glad no one got hurt in this instance, and we don’t want anyone to get hurt in the future."