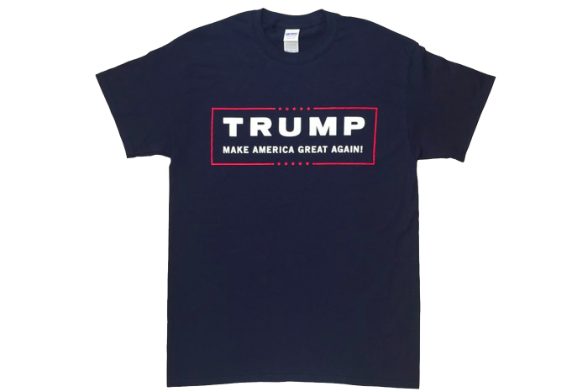 A central New Jersey school district has come under fire from free speech advocates after yearbook photos of two students were digitally altered to remove references to President Donald Trump printed on their clothing.

The discovery was made last week in the yearbook for Wall Township High School in Monmouth County, where juniors Grant Bernardo and Wyatt Dobrovich-Fago both found that the Trump apparel they had worn on photo day had been scrubbed of any reference to the president, according to CNN.

Berardo's T-shirt said, "Trump: Make America Great Again," but was rendered in solid black in the yearbook photo. Dobrovich-Fago, who wore vest with the name "Trump" on the left chest, also had the name blacked out.

School under fire for erasing Trump slogans from yearbook - When Grant Berardo, a junior at Wall Township High ... https://t.co/JzX68JVXBG

A third student who intended to quote President Trump also found that the yearbook did not include the quote she had provided to accompany her photo.

In a statement released over the weekend, the Wall Township school district denied it had any involvement in the alteration of the photos and pledged to investigate the matter.

"There is nothing in Wall Township High School’s student dress code that would prevent a student from expressing his or her political views, or support for a political figure, via appropriate clothing and attire," said Cheryl Dyer, Superintendent of Schools for Wall Township Public Schools. "Indeed, the administration applauds students for becoming involved in politics, making their voices known, and taking an active part in our democracy."

The parents of both students whose clothes were altered have reportedly called for the yearbook to be reissued. The families plan to meet with district officials in the coming week.

"The administration and staff of the Wall Township Public Schools strongly value the principles of free speech and inquiry in our schools and society, viewing them as the bedrock upon which our community and educational system is built," Dyer's statement continued. "The allegations referenced above are disturbing, and any inappropriate challenge to these principles will be rectified as swiftly and thoroughly as possible. The actions of the staff involved will be addressed as soon as the investigation is concluded."