Is this drawing appropriate for a school art show? parent asks

Student artist says feminism and freedom of expression are worth defending. 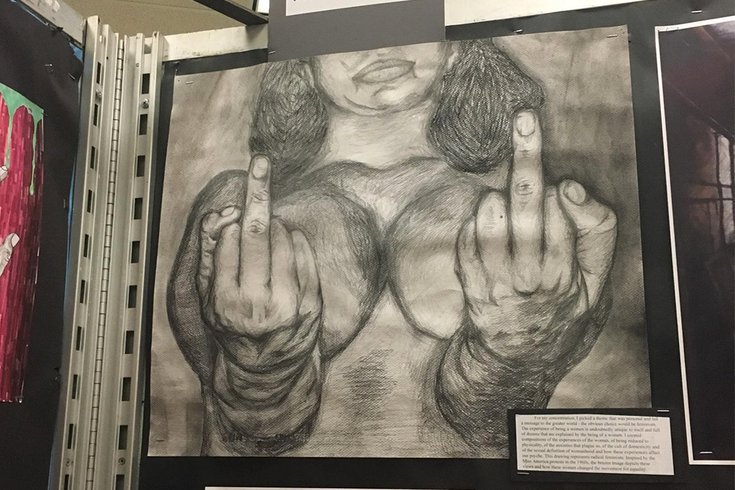 This drawing by Cheltenham High School senior Paige Kytzidis was part of the school's recent art show. One parent says the artwork was inappropriate for display at a school event attended by children of all ages.

A drawing on display in a student art show at a Montgomery County high school suffering from a rash of violence has at least one parent saying administrators should have censored the "profane" image.

Rebecca Anderson, a parent with two children at the high school, said she was offended to find a drawing of a topless woman, with both middle fingers extended upward in defiance, hanging at an art show last week at Cheltenham High School. The annual spring Unified Arts Show, which ran last week, features works by district students and is open to the public.

She said she considers the image inappropriate for any school setting, but particularly one that made headlines after seven teachers and three safety officers were injured in a pair of fights earlier this month.

"Nobody seems to think it's a problem," Anderson said. "I just think it's inappropriate. It's profanity. It wouldn't be allowed on television, but it's hanging in a high school?"

Anderson said she was not offended that the figure was topless, but she was taken aback by the middle fingers, which she said sent a "horrible" message to the school's students.

"It's just not high school-appropriate," said Anderson. "There's kids as young as 13 walking those hallways."

The artist, graduating senior Paige Kytzidis of Elkins Park, included a placard explaining the feminist inspirations for her piece.

"For my concentration, I picked a theme that was personal and led a message to the greater world — the obvious choice would be feminism. The experience of being a women is undoubtedly unique to itself and full of dreams that are explained by the being of a women. I created compositions of the experiences of the woman, of being reduced to physicality, of the anxieties that plague us, of the cult of domesticity and of the sexual definition of womanhood and how these experiences affect our psyche. This drawing represents radical feminism. Inspired by the Miss America protests in the 1960s, the brazen image depicts these views and how these women changed the movement for equality." 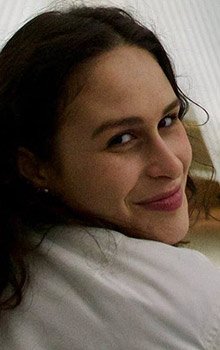 Anderson said students might not read the placard and take away an unintended message. And given the violence the school has witnessed, Anderson said the district should have a heightened awareness toward the messages it sends.

"This is just the problem — they don't know that that's profanity," Anderson said. "It shouldn't be tolerated. That's part of the (reason) we're having the problems we're having."

On Monday, O'Grady said she believed the art show was no longer active and pledged to look more closely into the matter. She did not respond to a follow-up inquiry.

'FEMINISM SHOULD BE PUSHED'

Kytzidis, the artist, has been vocal in recommending solutions to the school's violence problems. As the president of Cheltenham's student council, she delivered a speech that drew several standing ovations during a community meeting earlier this month.

Kytzidis defended her artwork as freedom of expression in an email to PhillyVoice.com, noting the importance that feminism has played in her life. She said she sought to merge the "ancient, early modern and contemporary" experiences of women in a series of artwork completed for her AP Studio Art class.

"Feminism is a simple, and common-sense ideology – it calls for the equality of the genders and that is all," she wrote. "This simple idea is often misconstrued by some in the media and some politicians (most of whom are male or male-controlled) who cannot fathom that their wisdom and narrative will be challenged by the very people they were taught were weak, insubordinate and stupid from the beginning of Western literature. The truth is much simpler: gender differences referring to innate ability are constructs, perpetuated by institutions designed and dominated by men. With my concentration, I seek to reverse these developments and to show that feminism, only means equality, and equality of men and women, an idea developed and supported by America’s founding documents and ideals. Feminism should be pushed, advocated for, and supported." 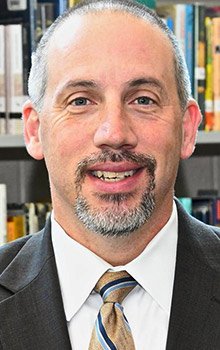 Raymond McFall, principal of Cheltenham High School, had no comment on the issue.

"I would also like to add," she added, "that this freedom of expression is a form of a healthy, thriving civil society which is always a measure of how developed and successful communities are."

For her part, Anderson said she posted a photo of the drawing to a Cheltenham Facebook group, hoping to find other parents and community members who shared her feelings. But most defended the artwork as freedom of expression, she said.

That left her frustrated, she said.

"They have a violence problem," Anderson said of the district. "They have behavioral problems. I was at this concert last (Wednesday). This picture is hanging there. Literally, nobody seems to think it's a problem."