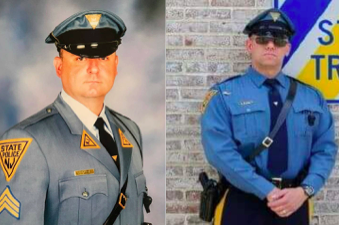 In a Facebook post on Tuesday, NJSP recapped the lifesaving situation and applauded the officers for their actions.

At around 4:30 p.m. on Nov. 25, Varnadore and Sitarik responded to a call regarding an unconscious 80-year-old man in the area of the airport's rental car drop-off section in the parking garage.

The man was said to have complained to a family member about feeling dizzy and then collapsed, the report said.

When Varnadore first got to the scene, the man was reportedly not breathing and had no pulse. Varnadore immediately began CPR until Sitarik arrived. Working together, they performed CPR and used an AED to deliver a shock.

After several minutes, the man regained a pulse and started to breathe, according to the report.

The 80-year-old man, who wasn't identified, was eventually transported by ambulance to Atlantic City Medical Center Mainland Division in Galloway Township, where he was last listed in critical but stable condition.