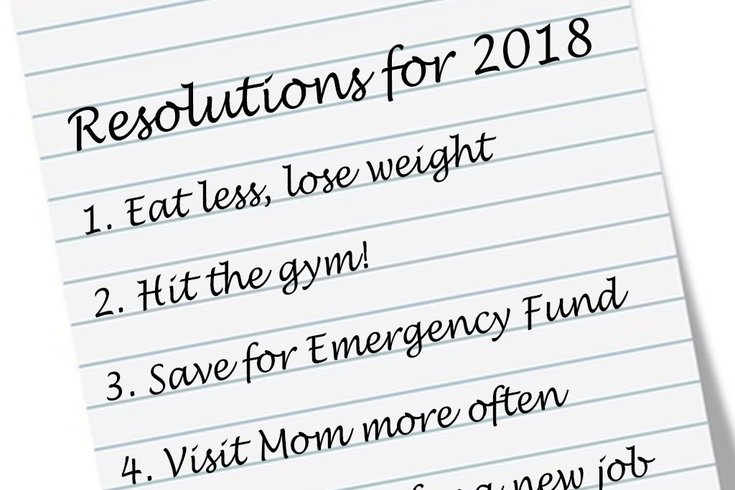 That’s what my (favorite) Philadelphia nephew said when asked about the value of resolutions last week.

He then ranted about the crowds at his gym during the first two weeks of January and how they disappeared by the end of the month.

He’s hardly alone. Many people are convinced that resolutions never succeed. In "The Picture of Dorian Gray," Oscar Wilde (1909) maintained that the origin of resolutions “is pure vanity. Their result is absolutely nil.”

And they are wrong. Contrary to widespread public opinion and “fake news,” a considerable proportion of New Year's resolvers do in fact succeed. That’s the truth from careful, scientific research tracking the success of people who make resolutions.

Here’s the reality: About 40 percent of adults in the United States will make New Year’s resolutions. That constitutes the largest annual effort to improve our collective behavior – 140 million people exercising their resolve at the same time.

Resolutions run the gamut of self-improvement, but the vast majority concern (1) health, such as losing weight, starting exercise and stopping smoking; (2) money, such as improving finances and getting a new job; and (3) relationships, including with those neighbors, co-workers, and in-laws.

About 40-44 percent of serious New Year’s resolvers will be successful at six months. Yes, that’s less than half, but way higher than simply wishing for behavior change.

For those trying, here’s what our studies indicate separates the successful from unsuccessful resolvers.

• Develop an action plan. How, specifically, are you going to counter the problem?

• Establish genuine confidence that you will keep the resolution despite the occasional slip. Confidence (or self-efficacy, as psychologists call it) is a potent predictor of who succeeds in the new year.

• Track your progress by recording or charting your changed behavior. Such “self-monitoring” increases the probability of keeping the resolution.

• Arrange your environment to help, rather than hinder, you. Limit exposure to high-risk situations and create positive reminders. Trigger healthy behaviors.

• Reward your successes. Reinforce yourself for each step with a (healthy) treat or compliment. Perhaps create a reward contract with a loved one.

• Build in a healthy behavior incompatible with your problem. For example, learn assertion if your resolution is to be less passive, or learn to relax if you are reducing stress.

• Expect occasional slips. Most successful resolvers slip in January. But a slip need not be a fall; pick yourself up and recommit to your resolution after a slip.

• Avoid self-blame after a slip. Frequent self-blame predicts who will give up soon.

• Think of resolutions as marathons, not 100-yard dashes. Prepare for the long haul of a changed lifestyle.

• Prepare for slips associated with negative emotions and social pressures. Consider, for example, leaving the pressured situation, distracting yourself, and calling a friend.

• Remember that meaningful change takes time. It takes about three months before a change becomes routine.

• Follow what research says actually works (as above) – there is a science to behavior change!

Making a New Year’s resolution is a valuable opportunity for annual reflection and life enhancement. These moments remind us to recommit to one’s best self and reflect on a better future.

So, to the cynics and my (favorite) nephew, I say don’t be a hata, look at the data! Resolutions can and do work for millions of people (except for Dallas Cowboy fans). Go Eagles, go 2018!

John C. Norcross, Ph.D., is Distinguished Professor of Psychology at the University of Scranton and author of "Changeology: 5 Steps to Realizing your Goals and Resolutions." He is the uncle of PhillyVoice.com Founder and CEO Lexie Norcross.