Ranking the best backup quarterbacks in the NFL 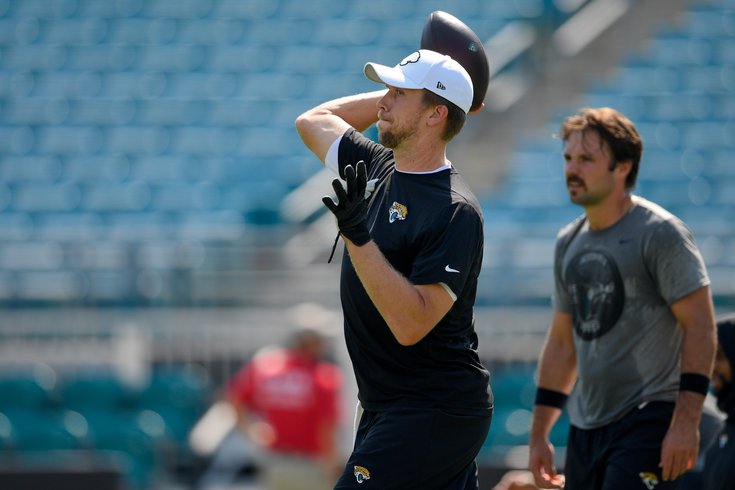 Nick Foles and Gardner Minshew when they were teammates on the Jacksonville Jaguars in 2019.

No one knows the power of a backup quarterback quite like an Eagles fan. There was the magic of Koy Detmer and A.J. Feeley back in 2002. Jeff Garcia became the city's "baby" during the team's unlikely 2006 playoff run. Then, of course, came Nick Foles during the 2017 playoffs, as the Birds' QB2 brought home the first Lombardi Trophy in franchise history.

A contender is going to need a backup signal-caller to take the reins and help their respective squad tread water at some point this season. That's a given. The Eagles' playoff hopes were kept alive last season when Gardner Minshew stepped into a starting role following a Jalen Hurts injury, throwing a pair of touchdowns in a Week 13 win over the Jets.

With the 2022 season kicking off on Thursday and football mania controlling our lives for the foreseeable future, there's no better time to rank the backups quarterbacks for all 32 teams:

Some notes on the selections...

• Garoppolo is stuck in San Francisco for the time being. The guy has played in the NFC Championship Game two of the last three years and nearly had the 49ers winning the Super Bowl in 2019.

• Minshew is a top-30 starter in this league. A very low-end starter with a tad of upside who's a perfect QB2.

• One game on the line to win: how couldn't you feel at least somewhat confident if Foles was under center for your team?

• Are we 100 positive that Dalton, Bridgewater, Taylor and Heinicke aren't going to be starting for their teams by the end of the year?

• The two quarterbacks who are going to have the most intriguing offseasons next year: Lamar Jackson and Tyler Huntley. Jackson has yet to work out a longterm deal with the Ravens. Huntley looked more than solid filling in for Jackson in 2021 and is a restricted free agent come March and will be entering his age-25 season in 2023. Will both of them be in Baltimore? Neither? One of them?

• I didn't quite know where to place the likes of Willis, Love and Pickett, early picks who've yet to showcase themselves in the pros. I put Willis highly because I value having QBs who are threats in the run game as backups. It's so hard to build timing in the middle of the game with the No. 2 guy. Having a dude who can make things happen with his legs, picking up first downs in high-leverage situations, is how teams can survive a mid-game injury to their starters.

• I don't understand how Kansas City and Tampa Bay have low-tier backups. They have legitimate Super Bowl win-or-bust aspirations and they're ready to trot out Henne or Gabbert if things hit the fan? Makes zero sense to me.

• Great call on having Rush as QB2 down in Dallas, Jerry!