The All-Pro safety officially requested a trade from the Jets on Thursday. 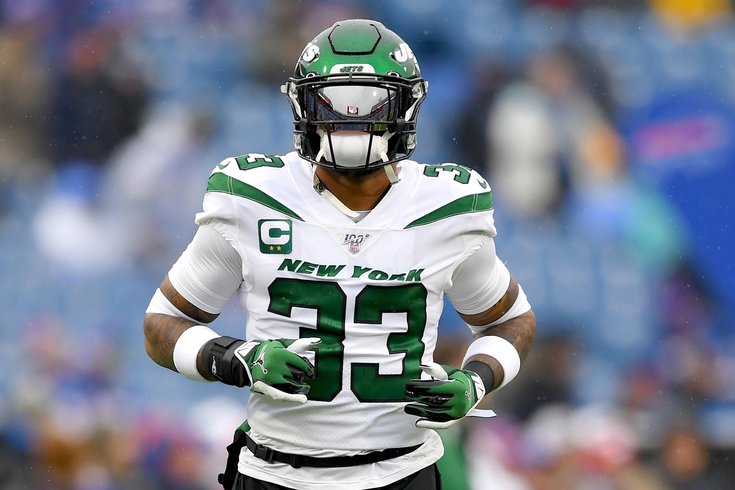 New York Jets strong safety Jamal Adams jogs on the field prior to a game against the Buffalo Bills.

With Malcolm Jenkins gone and the Eagles hoping that Jalen Mills can successfully transition from cornerback to a jack-of-all-trades safety this coming season, there's obviously reason for some concern at the position. But if Howie Roseman wants to make sure that area is solidified moving forward — and mitigate some of the risk of replacing a Pro Bowler with a converted cornerback, there might be an option for them to do so in a big way.

According to multiple reports, Jets safety Jamal Adams, who was hit with the franchise tag earlier this offseason, wants out of New York.

The Jets-Jamal Adams situation continues to deteriorate. Adams informed the team he wants to be traded, a source tells ESPN. #Jets

And according to ESPN's Adam Schefter, the Eagles are among the teams he's interested in joining.

Obviously, given the uncertainty at the position, adding a two-time Pro Bowl safety who was an All-Pro in 2019 and is still just 24 years old, would be a welcome move for the Eagles. From an on-the-field perspective, it makes all the sense in the world that the Eagles would want him. Just look at this stats over the last three seasons and where he ranked among NFL safeties.

But then there's the money...

Part of the reason Adams wants to be traded is his desire to be paid like the best safety in football — not just for one season on a franchise tag, but for the foreseeable future. He wanted the Jets to either give him a new contract extension or trade him. And despite the Jets hinting that they wanted to get a longterm deal with him, there's been no momentum in that regard since they placed the franchise tag on him.

Now, it seems, Adams has put his foot down and is demanding a trade.

In a recent mailbag, our own Jimmy Kempski was asked whether or not a trade for Adams would make sense for the Eagles. And when it comes to the football side of things, it seems to be a no-brainer, but the money (and what he may cost to acquire) likely makes it a non-starter for the Birds. Here's some of what Jimmy had to say:

He's awesome playing near the line of scrimmage, where, as you can see above, he has racked up big-time tackle, TFL, sack, and QB hit numbers. He can also cover, and he gets his hands on a lot of footballs. The only thing he doesn't have are impressive INT numbers (2 for his career), though one might expect those to rise, given his consistent ability to knock down passes.

As such, I do certainly agree that he would have a big impact on the Eagles' defense. However, as you suspected, you probably do already know my answer to this. They can't afford him.  [MORE]

There was a previous report that the Jets would've been looking for something in the range of a first and third. That price may go down now that Adams has demanded he be dealt — that obviously takes away some of the Jets leverage — but Adams is such a talented player that it very well could remain a big price tag. And if that's the case, the Eagles would be left with a relatively empty cupboard when it comes to 2021 draft picks.

So let's say the cost is indeed a 1 and a 3 in the 2021 NFL Draft. If so, because the Eagles already traded away their fourth-round pick in 2021 for Genard Avery, they'd be left with this:

And then on top of it, the Eagles would then have to make Adams the highest-paid safety in the NFL, which will cost a minimum of $15 million per season, that they just don't have available.

So you can probably forget about that one. [MORE]

Sure, the Eagles still have over $20 million in cap space, and on the surface it looks like they have the money to add Adams. But they still have some other holes to fill for 2020 — like backup running back, defensive end and, now potentially, another offensive lineman.

Beyond that, the Eagles are already projected to be $50 million over the cap in 2021, a number that could rise if coronavirus lowers the cap number nest season. They're hoping to roll over some of the money from this year to offset that overage next year, and adding Adams would not only take away all that potential savings, but would also balloon their cap projection for next year, putting them even further over.

Additionally, the Eagles like to go into a season with nearly $15 million in cap space for potential in-season trades and signings — especially if a player goes down and they need to make a significant move before the deadline — and then pray that they don't need to use it and can roll it over.

It's part of the reason Roseman has been so successful managing the cap. And while Adams might be one of the few players it's worth breaking your own rules to acquire, it doesn't seem like the Eagles will be willing to pay what it's going to cost.

Of course, stranger things have happened...