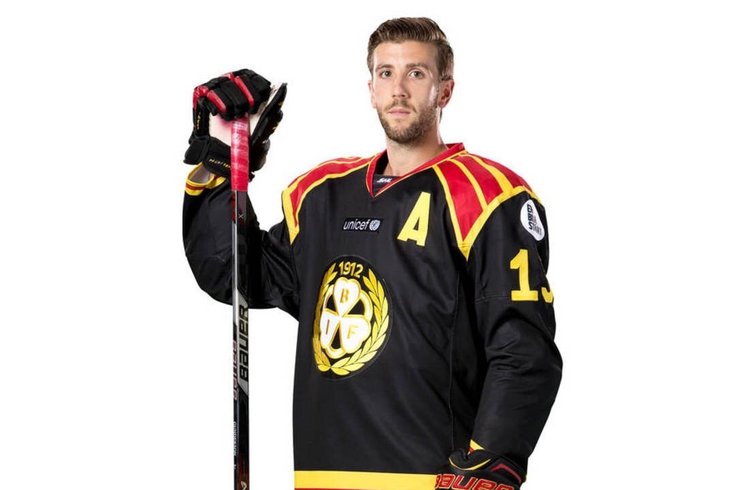 At 32, Bucks County native Ryan Gunderson will get his first opportunity to represent the United States next month at the Winter Olympic Games in South Korea.

Ryan Gunderson had a game that night back in late December, and was taking the afternoon to nap in his apartment in Gävle, Sweden, when he was awoken by a ping on his cell phone. It was a text message from Jim Johannson, the general manager of the 2018 United States Olympic men’s ice hockey team, asking the 2003 Holy Ghost Prep grad to give him a call.

Gunderson followed up, not knowing what to expect — would it be good news or bad news?

"I remember Jim calling me and saying he was having a great day, he gets to call guys to tell them that they’re part of the team," recalled Gunderson. "It was crazy. I think I blacked out the rest of the conversation. I don’t know what else he said."

Gunderson hung up the phone, shook his head and wondered if he was dreaming or not.

The 5-foot-10, 175-pound defenseman was just told he made the U.S. Olympic ice hockey team that will begin play next month in Pyeongchang, South Korea.

This will be the biggest thing in my hockey career... It’s a ways from first learning how to skate at the old Grundy.

Gunderson, 32, will take a break from playing for his Swedish Hockey League (SHL) team, Brynäs IF, and join a 25-player roster comprised of college players, American Hockey Leaguers, and Americans playing professionally in Europe, including former NHL player Brian Gionta and Hershey Bear Chris Bourque, the son of Hall of Famer Ray Bourque.

"It was amazing to get that news I made the Olympic team," said Gunderson, who has been a professional for 11 years, between playing in the SHL and KHL, the Russian professional league. "It’s a huge honor. This was something I wasn’t even thinking of or dreaming of for so long because I wasn’t going to have the opportunity to do just because [the Olympics] had been using NHL players.

"It came up and it was a once-in-a-lifetime opportunity that fell into my lap."

Gunderson will leave Feb. 7 with the rest of Team USA for South Korea and arrive Feb. 8, with the hopes of getting to the opening ceremonies on Feb. 9.

It’s been a twisting, turning odyssey for the Bensalem, Bucks County native. One look down the birthplace section of the Brynas IF roster tells you all you need to know: Nacka, Sweden; Stenungsund, Sweden; Orsa, Sweden; Stockholm, Sweden; Espoo, Finland; and standing out — Bensalem, Pennsylvania, United States.

The opportunity to play in the Olympics was made possible on April 3, 2017, when the NHL, which first allowed its players to participate at the 1998 Games in Nagano, Japan, ended the league’s run of five consecutive Winter Olympics with NHL players with a statement:

We have previously made clear that while the overwhelming majority of our clubs are adamantly opposed to disrupting the 2017-18 NHL season for purposes of accommodating Olympic participation by some NHL players, we were open to hearing from any of the other parties who might have an interest in the issue (e.g., the IOC, the IIHF, the NHLPA, etc.) as to reasons the Board of Governors might be interested in re-evaluating their strongly held views on the subject. A number of months have now passed and no meaningful dialogue has materialized. Instead, the IOC has now expressed the position that the NHL's participation in Beijing in 2022 is conditioned on our participation in South Korea in 2018. And the NHLPA has now publicly confirmed that it has no interest or intention of engaging in any discussion that might make Olympic participation more attractive to the clubs.

As a result, and in an effort to create clarity among conflicting reports and erroneous speculation, this will confirm our intention to proceed with finalizing our 2017-18 regular season schedule without any break to accommodate the Olympic Winter Games. We now consider the matter officially closed.

Gunderson, who lives now in Florida and also spends time in Vermont, will be joined on the U.S. team by former La Salle College High School star Chad Kolarik, who played at Michigan and spent several seasons in the AHL, even getting called up for a handful of NHL games with the Columbus Blue Jackets and New York Rangers.

Unlike Kolarik, Gunderson never reached the NHL. His ride to this stop came with some bumps.

After leading Holy Ghost to its first-ever Flyers' Cup (AA) in 2003, Gunderson attended the University of Vermont, where he received two years of scholarship money after originally being a recruited walk-on and earned a degree in business administration. He also had to make the move from playing forward to a defenseman. Later, he played in the East Coast League and briefly in the American Hockey League, where Gunderson says his game developed and gained the attention of scouts in the SHL. 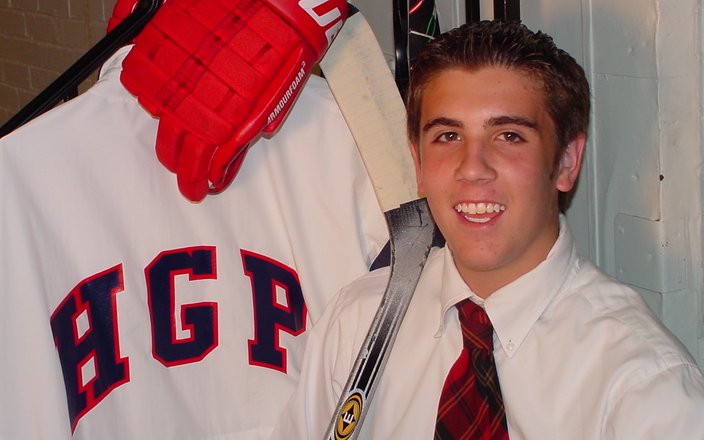 Ryan Gunderson during his time at Holy Ghost Prep in Bensalem.

Regardless, it’s a long way from the baby steps he took when he first learned the game at fabled Grundy Arena in Bucks County, keeping himself upright with a plastic toy golf club that he used as a hockey stick.

“Not that I didn’t try to reach the NHL, there wasn’t an opportunity that was ever presented to me, to be honest,” said Gunderson, who makes slightly over the NHL minimum playing in Sweden, which is around $525,000. “I had an OK college career and I played in the East Coast League. That’s where I was a player, and I began to improve here and when I came to Sweden, things really took off for me.

“I love the game. I think that’s what kept me going. I’ve had a good pretty good career over here in Sweden. Now, I’m living a dream on the U.S. Olympic hockey team. I just kept plugging along, reaching one level of hockey and trying to figure out a way to get to the next level.

“No one ever came out and said, ‘You can’t do this; it’s never going to work.’ Unless, I might not have been listening, or didn’t hear. For me, it was about trying to be as good as I can as long as I can. I would like to play until I’m 40, if I can. The SHL has a lot less games, there is a lot less travel than the NHL. I’m not slowing down yet.”

His sterling moment, he admits, will be pulling on that USA sweater before he takes the ice next month.

“This will be the biggest thing in my hockey career,” Gunderson said. “I remember calling my dad to tell him, and then my mom so they could make arrangements to go to South Korea. My parents kept asking, ‘Did you hear anything yet, did you hear anything yet?’ It’s a ways from first learning how to skate at the old Grundy.”