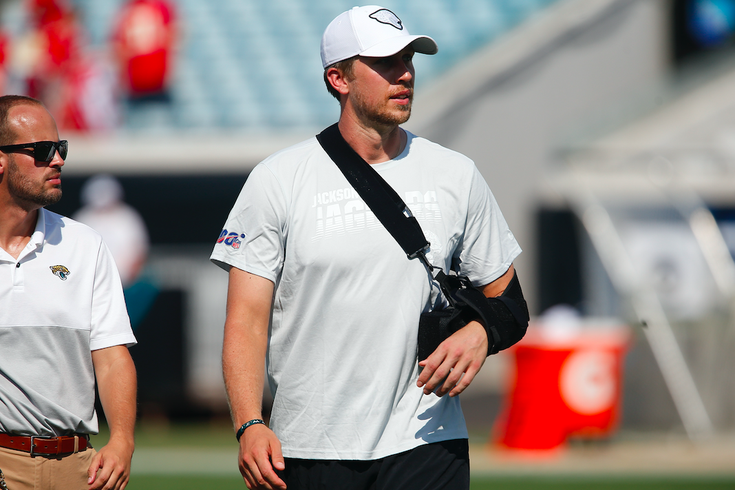 Jacksonville Jaguars quarterback Nick Foles wears a sling one day after suffering a broken collarbone in the season opener against the Kansas City Chiefs. Foles was placed on injured reserve and is expected to miss significant time.

It was a tough break Sunday for Jacksonville Jaguars quarterback Nick Foles, who broke his clavicle early in his debut against the Kansas City Chiefs.

The former Eagles quarterback and Super Bowl MVP was hurt while delivering a beautiful 35-yard touchdown pass to DJ Chark.

Of course, the more significant part of the play ended up being back where Foles got buried.

NBA superstar Kevin Durant, now a member of the Brooklyn Nets, saw the highlight of Foles' touchdown pass and thanked him for the entertainment.

Nick foles, that was a beautiful throw. Thank u for that piece of art

The Jaguars placed Foles on injured reserve Monday, anticipating he'll miss at least eight weeks as he recovers from surgery on his left collarbone. For Jaguars fans, the good news is that rookie quarterback Gardner Minshew stepped in and played pretty well in relief of Foles, despite the eventual loss. The Jags also traded for Steelers backup Josh Dobbs.

Durant, meanwhile, is expected to miss all of the 2019-20 NBA season as he recovers from a ruptured achilles suffered during the NBA Finals in June. There's some injury solidarity between Durant and Foles, who both have championship MVPs on their resumes.

Eagles fans were hoping to watch and cheer for Foles from afar this year, but they'll have to wait until later this season for him to get back on the field. With any luck, the Jaguars will still be in the hunt when he's ready to go.

#Eagles fans when they hear about Nick Foles' injury in his first game in Jacksonville pic.twitter.com/EpFvnQSkC9