Nine months after Veterans Day, family of vets still not in home renovated by Rebuilding Together

Nonprofit spent more than $33,000 on repairs to property; Owners say work was incomplete 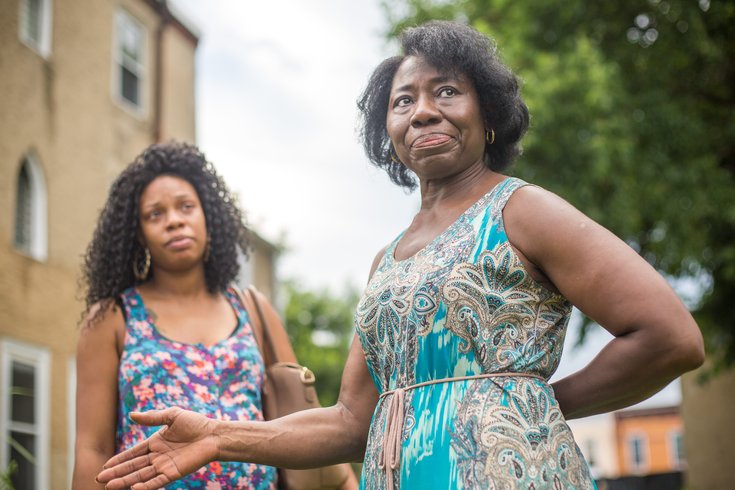 Sandra Lee, right, and her daughter, Nymiura Lee, say they are unable to move into their North Philadelphia home, claiming Rebuilding Together Philadelphia failed to complete renovations. For now, they live in Juniata Park with Nymiura's three children.

Nymiura Lee was all smiles last November as she posed for photographs outside a North Philadelphia house once owned by her grandfather.

The house, a cherished home passed down through a family of veterans, had fallen into disrepair after sitting vacant for several years. But thanks to Rebuilding Together Philadelphia, a nonprofit that provides critical home repairs to low-income homeowners, dozens of volunteers came out to complete renovations totaling some $33,000.

As volunteers worked inside the home, Nymiura conducted interviews with several media outlets, recalling the summers she spent there with her grandmother. Nymiura's mother, Sandra Lee, 65, had fallen ill and missed the fanfare. But as the current homeowner, she envisioned hosting a celebratory Christmas dinner inside the renovated home.

Yet, nine months later, the Lee family has not moved into the house.

The Lee family claims Rebuilding Together Philadelphia failed to complete the job, leaving them without heat, a completed kitchen or finished floors, among other complaints. The nonprofit says differently, pointing to paperwork that spells out the repairs it agreed to provide the family.

"We showed gratitude all along the way," Sandra Lee said. "They just took advantage of that. It's really disrespectful, because I'm not getting any younger. Time is going quicker. This was time we were supposed to be in the house." 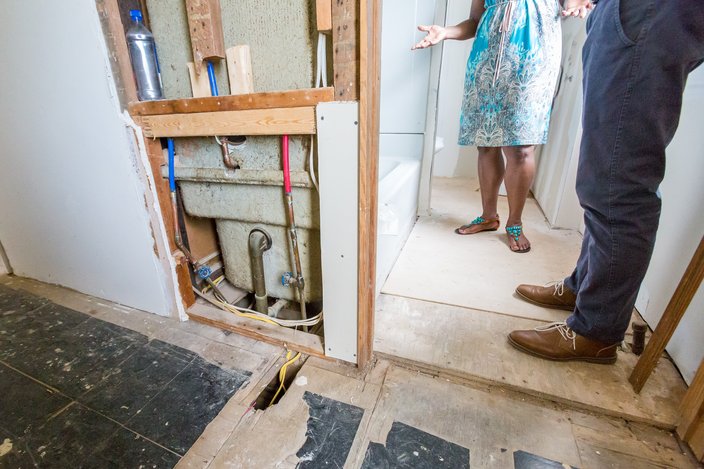 Sandra Lee shows her bathroom to a visitor, saying a newly-installed sink leaks and water fails to properly pour from the bathtub faucet. Renovations to other areas of the house remain unfinished.

The Lee family's ties to the house date back to 1959, when World War II veteran George Barksdale — Nymiura's late grandfather — purchased the home. He later transferred ownership to his daughter, Sandra, the widow of Charles Lee, a World War II Army veteran. Several other family members lived in the house up until several years ago, when the house began showing its wear and tear.

Nymiura, a Chicago native, remembers spending her summer vacations and holidays at the house. And when her family moved into the neighborhood, the house became a second home. But over time, the house began falling apart.

Sandra said she found it difficult to cover the costs of repairs and was bamboozled by contractors when she tried. But she applied to receive home repairs from Rebuilding Together Philadelphia upon learning of the nonprofit during the summer of 2014.

The nonprofit was transitioning away from repairing individual homes to its current focus — cluster builds of 10 to 30 homes. But Rebuilding Together Philadelphia accepted Sandra's application, intrigued by her family's military service.

Sandra's late husband, Charles Lee, served in the 858 Engineers Aviation Battalion, the first such battalion to work on the Burma Road in China. He later joined the Fighting 99th squadron of Tuskegee Airmen. Her daughter, Nymiura, 29, has served two terms in the Air Force Reserves.

With a stated vision of "a safe and healthy home for every person," Rebuilding Together Philadelphia completed $1.4 million worth of repairs for 72 homeowners and three community-based agencies during Fiscal Year 2015, according to its latest annual report. The nonprofit aspires to hit similar marks each year.

Since its founding in 1988, the nonprofits boasts of completing 1,444 homeowner projects using $30 million of volunteer labor.

"We wanted to put them in their home — that's what we wanted to do," Rebuilding Together Philadelphia Executive Director Stefanie F. Seldin said. "We are so incredibly sad that it didn't happen." 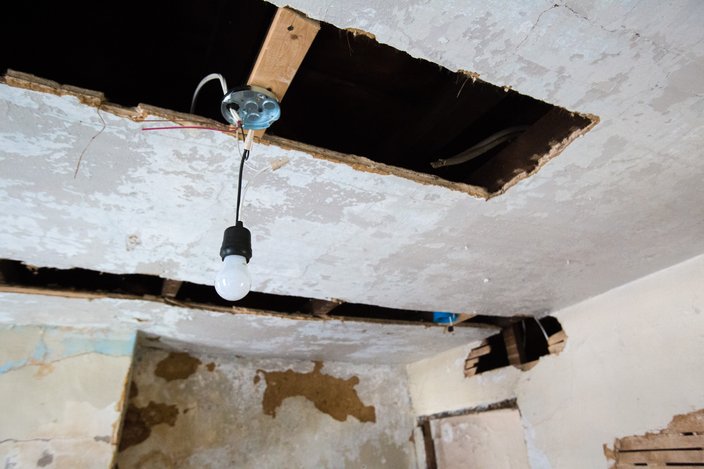 The third floor mostly remains unrenovated, beyond electrical work. Rebuilding Together Philadelphia says it never agreed to do renovations on the third floor because the Lee family — which then included four members — did not need it to move into the house.

Exactly why the Lee family is not in their home remains a point of contention.

The Lee family argues that, despite a series of completed renovations, the house remains unlivable. They ran through a list of complaints that range in scope and size.

All of that was promised by Rebuilding Together Philadelphia, the Lee family alleged.

"It's a mess," Sandra said, frequently tearing up as she guided a pair of visitors through the house earlier this month. "I could never explain it. No one could ever understand unless they saw it. It's just ridiculous. It really is."

Rebuilding Together Philadelphia worked to put the Lee family in position to move into their home, Seldin said, but made no promises that would happen.

The heating system and remaining kitchen work was to be covered with a home improvement loan taken out by Sandra Lee and the added assistance of the Low-Income Home Energy Assistance Program, Seldin said, citing a June 17, 2015, letter sent to a creditor. With those steps, Rebuilding Together Philadelphia felt the family could move into the home, Seldin said.

"It wouldn't have been perfect," Seldin said. "But it was absolutely move-in-able." 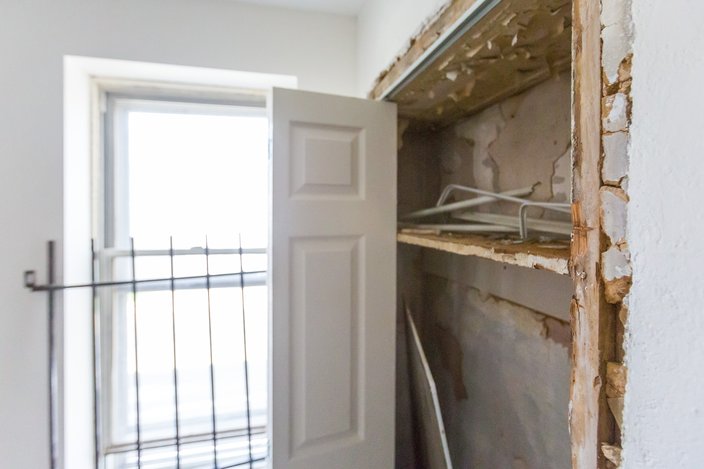 New drywall was installed throughout the first two floors of the house, but Sandra Lee questions the quality of the renovations, pointing to unfinished closets and security bars that do fit the new window openings.

Sandra said she did not expect Rebuilding Together Philadelphia to provide her a perfect home. But when she visits the property, she sees an incomplete house.

In no way does she — or Nymiura and her three children, the third born earlier this month — feel it is ready to move in. For now, the family continues to live in Juniata Park.

"You feel like you're complaining," Sandra said. "I even went to legal aid. I'm trying to find out who holds these people accountable. It's like you have nowhere to turn."

Legal Aid representatives informed Sandra that they could not take any action, instead referring her to an attorney. Feeling hopeless, Sandra said she never met with the attorney. She also never responded to an invitation to discuss her complaints with the president of the nonprofit's board of directors.

Sandra said her family lost faith in Seldin and Rebuilding Together Philadelphia long before that possibility arose. She saw little benefit in simply meeting with someone from the nonprofit.

"I still feel, in the presence of someone else, it would be a different story," Sandra said. "You have both sides right there. The things that would come up ... she would have to answer to."

Rebuilding Together Philadelphia points to a Work to Perform Agreement detailing 18 repairs to be completed. None of the listed repairs include any of the work the Lee family claims was promised but not completed. But Sandra said the listed repairs only were added to the form upon completion.

She also pointed to a budget, dated July 30, 2015, that includes estimates for various kitchen repairs, drywall repairs on the third floor, vinyl flooring throughout the house and a new furnace and ductwork.

Yet, the Work to Perform Agreement, signed by Sandra on Feb. 15, 2015, also includes a stipulation that "RTP has absolute discretion to determine what, if any, work will be performed on the house and RTP is under no obligation to come back and do any further repairs or other work on the house." 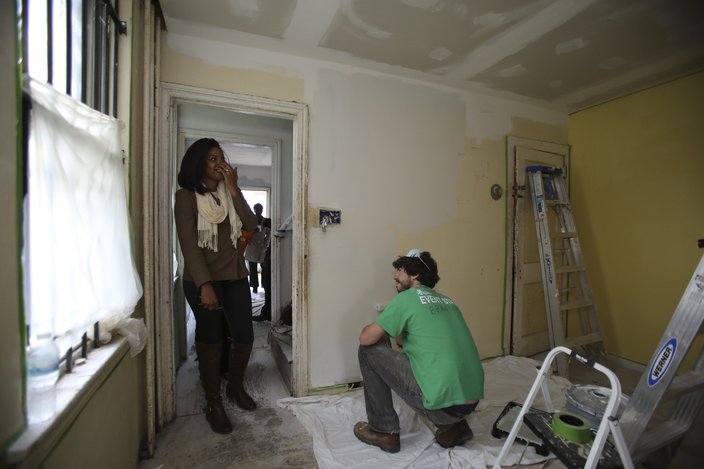 Nymiura Lee covers her mouth in shock last November after checking out renovation work being done by a team of workers on her family home in North Philadelphia.

"We made it clear — it was all grant dependent," Seldin said. "We couldn't promise that we would move them in."

Yet, the Lee family insisted they were assured that they would be living in the home by Veterans Day. Without that assurance, they wonder the purpose of the renovations.

"It doesn't make sense," Nymiura said. "You say you spent $30,000 on a home, but gave no promises that a person could live in your house? What is the point of all of that money?"

Rebuilding Together Philadelphia informed Sandra that it did not have the funding to purchase a heater, estimated to cost $8,000 with installation, according a letter dated Aug. 4, 2015. The letter also recommended she apply for LIHEAP, if she could not afford the costs, and spelled out the nonprofit's intentions for the remaining kitchen renovations.

At the encouragement of Rebuilding Together Philadelphia, Sandra said she took out a $10,000 home improvement loan, despite feeling uneasy about going in debt. She used the funds, in part, to purchase kitchen cabinets after a donated set turned out to be moldy. She spent additional money on cleanup work around the property, but also used some funds to cover a family emergency.

There is still loan money remaining, Sandra said. But, at the moment, she said the unresolved situation overwhelms her.

"I feel terrible and I'm lost," Sandra said. "I really want to come to the end of this situation and just really have some joy with my family." 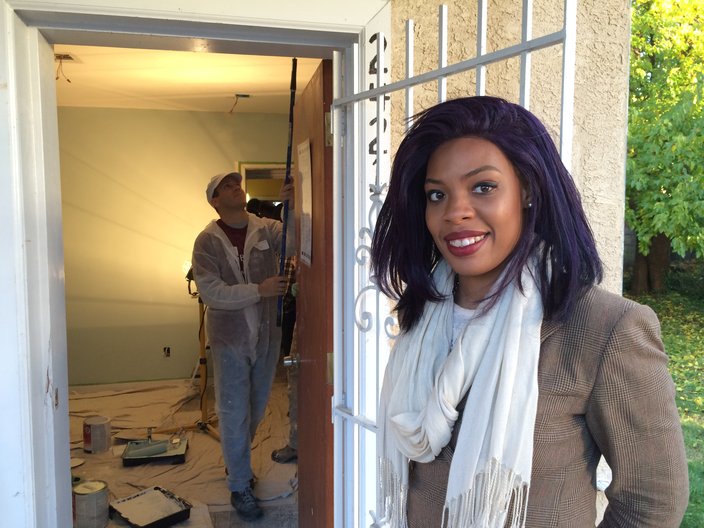 Nymiura Lee stands outside her family's home last November as volunteers paint the interior of the first floor. Lee smiled for photographers and conducted several interviews that day, but now says the renovations completed by Rebuilding Together Philadelphia are not sufficient for her family to move into the house.

Instead, her memories of that Veterans Day workday are singed by cynicism.

A press release billed the day as a celebration, noting volunteers would put the "finishing touches" on a series of renovations. Officials from Comcast and HGTV, which provided volunteers, came out. So did media members and at least one political candidate.

Looking back, Nymiura said her family feels used by Rebuilding Together Philadelphia. The nonprofit reaped publicity from the event, but her family never moved into the house.

The family does not expect any further assistance from Rebuilding Together Philadelphia, either. Communication between the two parties essentially has ceased.

"Who really gained from this?" Nymiura said. "It surely wasn't our family. It was that organization. Because we're still not in our house."