A non-sports fan's guide to the Sons of Ben 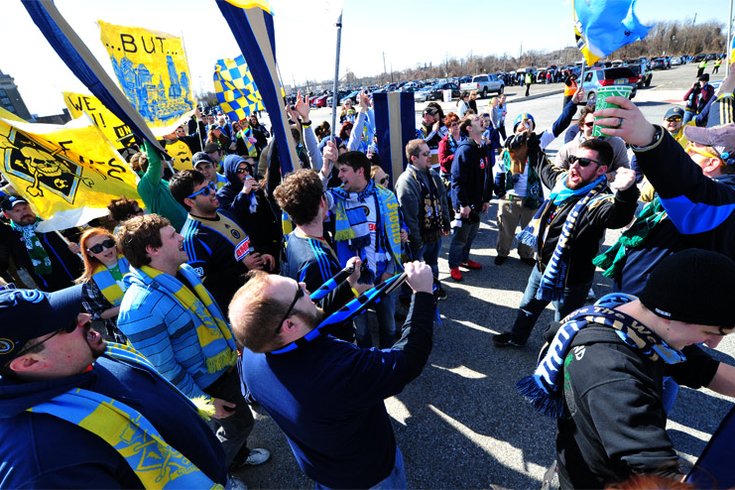 The Sons of Ben gather before a Philadelphia Union game.

You think Eagles fans are crazy? Meet the Sons of Ben, the Philadelphia Union supporters group who were fans of their local Major League Soccer team before it even existed.

They're the subject of a recent documentary, "Sons of Ben: The Movie," which details how a group of local soccer lovers showed so much spirit for the idea of a team that the MLS actually gave Philly one in 2008. It's an emotional ride that makes viewers root for the fans as much as the Union -- if not more.

As the film makes the festival rounds (like its Kicking and Screening Soccer Film Festival premiere Thursday, June 25) and fields questions about its streaming availability, it's bound to turn some viewers into wannabe Union fans.

Sports fan or not, if you've lived in Philadelphia for long enough you've most likely been to a Phillies game or a Sixers game. (Tickets are cheap these days, after all.) If you've graduated to cheering on the Flyers or the Eagles, you've probably got the fan thing down by now.

But seeing a Union match with the Sons of Ben is a bit different. They're not just fans; they're a fandom.

"A supporters group is not just a dedicated group of fans. The Sons of Ben are a family," SoB Vice President Ami Rivera said. "We see each other when the team is not in season. We get together for events when there's not a game going on. ... It's really a whole different community and that supporter's culture I do think is different from what you get at a Phillies game or what you get at a hockey game."

If you've been inspired by "Sons of Ben: The Movie" or are just looking for a new hobby, read on for tips from Rivera on how to look like you've been cheering for the Union since 2008. 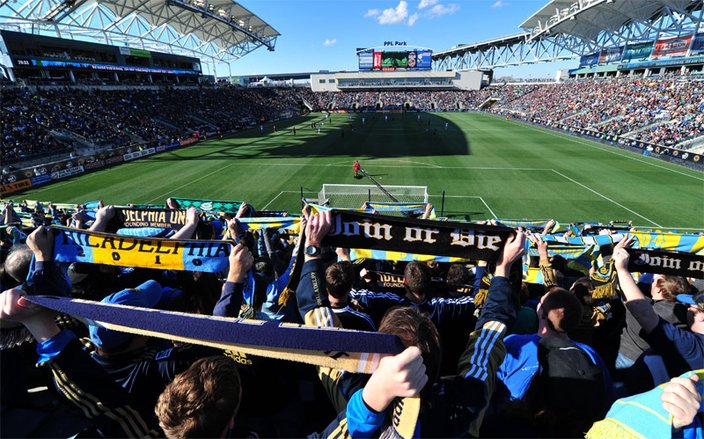 The Sons of Ben cheer on the Philadelphia Union. (Earl Gardner/Philly Soccer Page)

Don't be intimidated: Never been to a Union game? Or maybe even a soccer game? No one cares.

"When you come to the River End you are welcome to be there. We want you to stand and chant and cheer and have a great time," said Rivera.

What to wear: Anything blue and yellow. Or navy and gold. Or periwinkle and marigold. Anything close to the Union's colors or the SoB colors will do. Just don't wear red; that's the color of Union rivals the New York Red Bulls. (Read: No Phillies gear. Sorry!)

Also, you may notice that fans will wear team scarves even in the summer. They're half accessory, half sign. Just go with it.

What to read: Philly Soccer Page. It's many fans' preferred outlet for drama-free local, regional and international soccer news.

Where to tailgate: Sons of Ben often holds ticketed tailgates in their own lot off of Highland Avenue. You don't have to be an official SoB to go, but you will get a discount if you are one.

Otherwise, if you park on site you're able to tailgate in and around your own parking space. Toyota Plaza, a space outside the park, has a grassy area where tailgaters can congregate and also has children's games, inflatables and vendors.

Benjamin Franklin: Obviously, everyone knows who Ben Franklin is. But just in case you didn't notice that the Sons of Ben are named after him or that his skull tops the SoB crest, you should also know that the snake in the Union's team crest is in homage to his famous "Join or Die" political cartoon. Philly really loves the guy.

Doop: When chanted to the proper tune, "doop" becomes the Union's goal celebration song. Listen to it here. You will see the word "doop" everywhere.

Tifo: This is short for tifosi, the Italian word for a group of supporters or fans. In this context it means the signage fans use to the support the team. Ryan Bross is SoB's Tifo Director and the mastermind behind their displays. ("He’s the one covered in paint," Rivera said.)

'Nack: The Sons of Ben publish an email newsletter called the 'Nack. (You can also find it here.) This is short for Almanack; the newsletter was initially called the Sons of Ben Almanack in reference to Benjamin Franklin's "Poor Richard's Almanack."

Capo: Shortened from "caporegime," a term for a high-ranking mafia official, "capo" in this context stands for one of the supporters' group leaders. In short, they lead the chants, cheers and spirit. 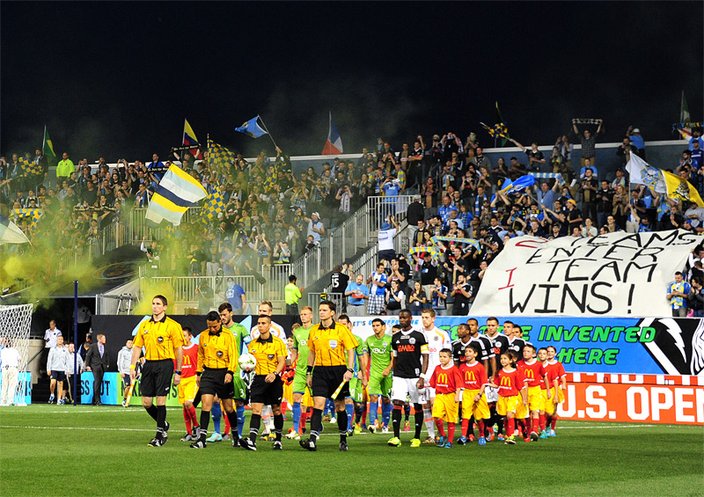 The Seattle Sounders enter PPL Park with the Sons of Ben cheering on behind them at River End. (Earl Gardner/Philly Soccer Page)

Get to know PPL Park

This is the Union's home turf, located in Chester County along the Delaware River.

How to get there: PPL Park is about a half hour outside of Center City by car or an hour if you take SEPTA Regional Rail's Wilmington/Newark Line. You can either hop on a free shuttle from Chester Transportation Center or walk 15 minutes from the Highland Avenue stop.

Where to sit: The Sons of Ben stand in the River End of the park, sections 134 through 140. Here you'll find fans chanting, singing, playing music and waving flags. It's the place to be if you want to have the most fun. River End is very family-friendly, too, Rivera said. Kids are welcome and plenty of members bring theirs along.

Those sections, though, are standing only. If you can't stand for all ninety minutes of the match, you might want to choose different seats. The opposite end of the park, sections 114 through 120, often gets some shade from the overhead VIP club.

What to eat: There are 15 different concession stands in PPL Park, but the crown jewel is Dogfish River Deck. New this season, it's a beer garden which features (you guessed it) Dogfish Head beer. Plus, it's located at River End.

Where to go: Some SoB members convene in the SoB lot after games, but others will head to Stoney's Pub, a soccer-supporting British restaurant across the Delaware border in Wilmington.