Nor'easter brings surprise thundersnow to Philly area; did you hear it? 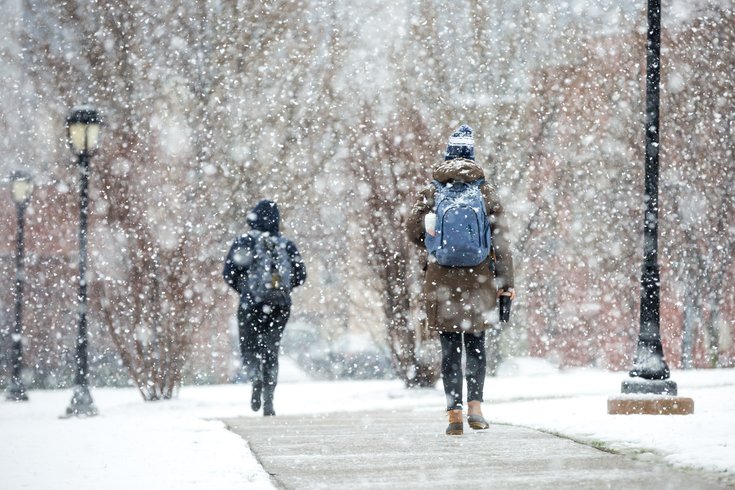 Students walk through Drexel Park in University City as heavy snow falls in the morning on Wednesday, March 7, 2018.

After a sluggish start, Wednesday's nor'easter had finally brought a steady snowfall across the Philadelphia region by lunchtime and looked on pace to bring at least 8 inches of snow to the area by nightfall.

The heavy, wet flakes, expected to create near-whiteout conditions in the city and suburbs at times during the day, are here.

RELATED: For Mother Nature, an early feint followed by a potent punch

Anyone else just hear the #Thundersnow in Philly? pic.twitter.com/JlC24aJ2dC

This is the loudest #thundersnow I've ever heard!!! cc @LaurieStenger10 #Philly

Yup, that was #thundersnow

#thundersnow is in full force in South Jersey @JimCantore

Reports of the rare weather phenomenon from people along the I-95 corridor and in Philly and New York City began popping up on social media late Wednesday morning and were trending locally by the afternoon.

Here's a sampling of the reaction:

Just experienced #THUNDERSNOW for the first time of my life and let me tell you it is everything I thought it could be.

just heard #thundersnow! the best part is the kids from the middle school across the street from the ANHD office screaming their heads off in excitement, which i can't do at my desk

I wish I was as excited about life as @JimCantore is about #thundersnow also, Philly just had some so where are you Jim? pic.twitter.com/8gxFnVFJMW

Its dumping big fat flakes and now #thundersnow in Philly #NorEaster2018. Kaboom! Did you hear that @JimCantore ?!?!

Meteorologists said earlier Wednesday morning that thundersnow would be a possibility.

Wednesday’s scenario is unique because the air at the mid-levels is so incredibly cold. That will enable the generation of “traditional” vertical instability, just like in the summertime. The result could be a spectacular — and unusual — light show in major metropolitan areas of the Northeast during the height of the storm. The National Weather Service Storm Prediction Center has included many Northeast cities in their thunderstorm outlook, a highly atypical move in the wintertime.

Forecasters are calling for snowfall rates of 1-2 inches per hour to continue this afternoon.